When Abduction Turns to FSB ’Search’ in Russian-occupied Crimea 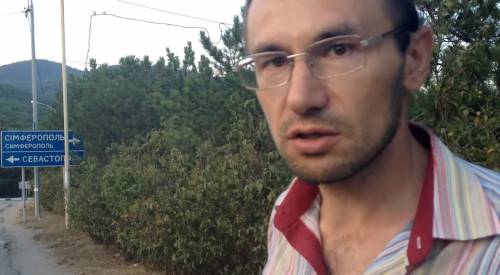 13 months before the night of May 24, 2016 when Crimean Tatar activist Ervin Ibragimov was abducted from near his home in Bakhchysarai, an attempt was made to seize Crimean Tatar rights activist Emir-Huseyn Kuku.  The assailants that time were foiled since Kuku managed to get out onto a road where his cries for help were heard.  The attack then suddenly turned into a ‘search’ by FSB officers. Kuku’s documented battle to have the officers held accountable almost certainly led to his arrest in February 2016 and ongoing detention.

Ervin Ibragimov was abducted in the late evening.  He has not been seen since, and the de facto authorities even refused initially to accept the report from his parents. While it cannot be proven that a similar abduction of Kuku was planned back in April 2015, there is considerable evidence to suggest that his arrest in Feb 2016 was a mixture of personal revenge and FSB wish to get rid of a person who was actively monitoring rights abuses in the Yalta region.

Kuku became a member of the Crimean Contact Group on Human Rights after the abductions and disappearances of young Crimean Tatars in the months after Russia’s invasion and annexation of Crimea.

The first major trouble came on April 20, 2015.  Kuku himself describes what happened.

He was set upon by two men who began with blows to the head, and continued beating him. His phone which was in an inside pocket began ringing and one of the assailants tried to grab his bag off him, and get to the phone.  He resisted, and turning around saw one of the assailants who, he later realized, had been following him.  At that stage he was still assuming that this was a robbery. The men, after all, had said nothing at all, just tried to pull his arms behind his back while continuing to beat him around the head, and kidneys.

Since he didn’t know if they were armed, he decided not to try physical resistance, but did begin shouting.  That made them beat him even harder, demanding in foul language that he shut up.

His shouts fortunately attracted people’s attention.  People in a car recognized him and stopped.  The people ran up to the assailants and demanded to know what was going on.

Kuku, who was being held with his head to the ground, heard the word ‘police’ and demanded that the assailants show their ID.  They answered with foul abuse, demanding that those who were coming over, and by then a crowd had gathered, disperse.  Shortly after they showed that they were armed, a white van drove up.  At least four masked men in full military gear with machine guns jumped out and demanded that the crowd disperse.  They violently forced Kuku into the van, and drove off, followed by some of those who’d stopped to help Kuku and feared he was being abducted.

In the van they proceeded to beat him, and he heard one of them on the phone tell somebody that they were being followed and needed to change cars.  The masked men were angry that he had attracted a crowd – he, not the men who had attacked him.

They stopped the car somewhere in Yalta, and kept getting in and out, obviously consulting with somebody.  Presumably the attention which Kuku’s attack had aroused proved a deterrent, and they finally stopped beating him and announced that they needed to carry out a search of his home.

Popkov is convinced that the FSB were determined to prosecute the human rights activist, with the article of the Criminal Code a secondary consideration.

In December 2015 new charges seemed to have emerged under Russia’s notorious ‘extremism’ laws.  This was in connection with material posted on his Facebook page.  There were around 42 texts, with many of them posts, or reposts, on religious subjects. At that stage, the charges seemed likely to be of ‘inciting interethnic enmity’.  The FSB apparently also objected to simple reposts, without any added commentary, of news on political issues.

There was no mention then of Hizb ut-Tahrir, the pan-Islamist organization which is legal in Ukraine and in most other countries.  Russia has declared it ‘terrorist’ without providing any grounds for this, and uses it for multiple arrests and guaranteed long sentences (more details here Russia’s Conveyor Belt of Repression in Occupied Crimea)

Kuku and three other men were arrested after armed searches, which Kompaneitsev took part in, on Feb 11.

Damir Minadirov, a good friend of Kuku’s, has also shed light on the methods applied.  The FSB turned up at his home as well on Feb 11 Before opening the door, Minadirov did something that may well have protected him from the same fate as the other men - he posted a message about the visitation on Facebook.  The armed men burst in and behaved very aggressively and with numerous infringements until somebody learned that he had reported the search on Facebook.  They were initially indignant, but did begin behaving themselves.

Later, however, he was taken to the FSB where Kompaneitsev turned up, said that the others had been imprisoned and tried to get Minadirov to give testimony against them.  The ‘persuasion’ was first verbal, and then with the use of a plastic bag over his head.   He was also threatened with being arrested, together with the others, if he did not agree to collaborate with the FSB.   Minadirov refused, but immediately afterwards left Crimea and is now living in Kyiv.  He says that he understood he needed to leave, that this was “safer for him and they guys”.

“The FSB are carrying out a total purge of dissidents in Crimea and those guys were not silent.  They recorded attacks, abductions, and I helped them.  We felt the pressure on us.  It was clear that our telephones were being tapped and Emir-Huseyn said that he was being followed”, Minadirov says.

Both Minadirov and Popkov are convinced that Kompaneitsev’s personal animosity towards Kuku has played a major role in the new prosecution.  There are also grounds for believing that two other men – Ruslan Zeitullayev and Ferat Saifullayev – are also victims of this turncoat who has gained power in the FSB.

There is no evidence that any of the 14 men now in custody and facing long sentences are even members of Hizb ut-Tahrir, let alone that they have committed any crime.  Under Russian occupation, that seems tragically redundant.