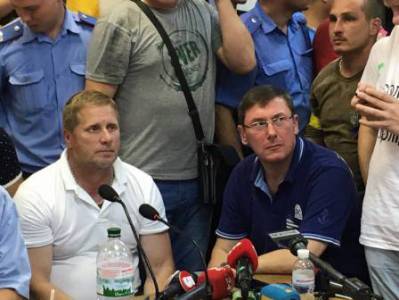 The events on July 2 around the detention of former Aidar commander Valentyn Lykholit elicited widely divergent reactions and some worrying assumptions about what need not be considered in fighting ‘separatists’  While some hailed the success in getting a hero released from custody, others expressed concern about pressure on the courts, and bemusement over the Prosecutor General’s words about the removal of liability for some peacetime offences committed by military men.

There was worryingly little public interest in the charges laid or in checking other allegations made.  Judging by an article provocatively entitled ‘Do ‘patriots’ get special dispensation to commit robberies?’, the claims about the ‘separatism’ of a man kidnapped and beaten in August 2014 did not bear scrutiny.  The article’s author is Severodonetsk journalist and rights activist Oleksy Svyetikov who had followed that episode which figures in the charges against Lykholit and another former Aidar fighter Ihor Radchenko.

Lykholit is one of the founders and ex-commander of the Aidar Volunteer Battalion which played a major role in fighting the Kremlin-backed militants in the Luhansk oblast in 2014.  He was arrested last week and on July 2 remanded in custody for 2 months by the Pechersk District Court in Kyiv.  He was, however, released at appeal level the same day following mass protest by former colleagues from Aidar, Azov and other volunteer battalions, and after the Prosecutor General Yury Lutsenko personally intervened.

The charges are based on reports received in 2014 and 2015, so remanding somebody in custody in the middle of July 2016 could certainly be seen as excessive.  Lutsenko, for example, believed there were no grounds for not believing Lykholit who had promised to cooperate with the investigators. He was released on the guarantee of some MPs.

The scenes in court at the weekend and the discussion on social networks were, however, about much more.  MP and lustration champion Yehor Sobolyev called the situation one of ‘selective justice’.  He wrote that when volunteer fighters are behind bars, and people like Renat Akhmetov, Oleksandr Yefremov and Vadim Novynsky, all closely associated with the regime of ex-President Viktor Yanukovych are doing better and better, this means only one thing – that Russian President Vladimir Putin is winning.  He does not mince words, suggesting that the victory is as a result of corruption with Russia having agents in Ukraine’s Prosecutor General’s Office, SBU [Security Service] and President’s Administration.

“Those who comfort themselves with the thought that Batya didn’t do everything according to the law should understand – you will be next”.

He later wrote from the court that they had been waiting for 6 hours for judges prepared to release Lykholit.  These, he said, only emerged after they threatened to use force to secure his release.

Lutsenko, for whom the law on the Prosecutor General was recently amended to allow a person without legal education to take office went further than simply supporting Lykholit’s release.  On his Facebook page he wrote as follows:

“Now MPs must take one further important step – and take the decision to free from liability military people who, in military conditions, violated the Criminal Code of peacetime”.

It is just possible that Lutsenko was referring solely to the requirement in the Minsk Accord for a law amnestying both sides of the conflict.  Although Ukraine has not declared war, nobody would seriously suggest that members of the volunteer battalions who took up arms to defend their country could be prosecuted under ordinary laws on causing death and injury, or use of weapons.

Lutsenko’s words were, however, widely reported, with many assuming that they pertained to the charges against Lykholit.  Many of the ex-Aidar commander’s supporters were certainly talking of him as a hero, and dismissing the allegations against him as having come from people who supported the Kremlin-backed militants.

Ukraine has not declared a state of war, and the status of the volunteer battalions in Donbas was always undefined, with this leading to inevitable legal problems.  Roman Kuybida from the Centre for Political and Legal Reform explained to Deutsche Welle that the battalion members were effectively in a legal trap, with their activities not regulated by the Criminal Code.  He believes that the situation does need to be studied and “perhaps, in cases not linked with the terrorization of the local population, amnesty could be applied or criminal liability waived”.

According to Tetyana Blyznyuk, coordinator of the Committee for the Release of Political Prisoners, the authorities do not provide reliable information about the number of volunteers arrested and / or tried.  She asserts that in Mariupol alone, there are around 300 volunteer battalion fighters in detention.

There are certainly a number of other prosecutions involving members of battalions which have caused concern, including the initial detention, and now ongoing charges against Yury Hukov.

On the other hand, Aidar has come in for considerable criticism, including from Amnesty International, which has demanded that the Ukrainian authorities investigate credible reports of abuses and war crimes by members of the battalion.

Oleksandra Matviychuk, head of the Centre for Civil Liberties, insists that every case requires thorough investigation.  “People who justify killings, rape or torture of the local population as military action have clearly forgotten what we fought for on Maidan, and what we are fighting for in this war”, she says.  She does basically agree with the reports on rights abuse from the UN Monitoring Mission in Donbas, but believes that the figures given, and details about the nature of the abuses, are not always correct.  While there is an organized system of abductions and torture of civilians in the area under Kremlin-backed militant control, she says, the Ukrainian authorities do try to react to such behaviour in areas liberated and now under government control.  They do this ineffectively, however.  There has been disturbingly inadequate investigation, for example, into the unexplained deaths not only of civilians, but of soldiers who had openly expressed protest against unwarranted actions by the military command.

Ukraine’s enforcement bodies and courts have not done much to deserve public trust, however Matviychuk is certainly not alone in finding the prospect of members of the public taking the law into their own hands disturbing.

Most of the reports about Lykholit’s arrest focused on the scenes in the court, with few doing more than briefly reporting the statement from the Military Prosecutor’s Office.

One exception is the report from Svyetikov who, as mentioned, has reported one of the episodes back in August 2014, and who refutes the allegation that the victim was a ‘separatist’.

According to Svyetikov, on Aug 1, 2014 Valentyn Kazakov, Mayor of Severodonetsk and three of his deputies were arrested by Lykholit and, according to unofficial information, Ihor Radchenko.

Svyetikov notes that Sobolyev claims that Kazakov was a separatist who organized the so-called ‘referendum’ on May 11 in Severodonetsk, and that the only loss incurred was the theft of his camera.  Svyetikov’s version of events is quite different:

“Then at night a group of armed individuals seized the deputy mayor Volodymyr Kravchenko and, together with him, turned up at Valentyn Kazakov’s home.  Kazakov opened the door to his subordinate and long-time friend.  Both of them, as well as another deputy mayor Yevhen Khalin were taken to the Aidar base at Polovinkino.  Kravchenko was brutally beaten and all three had their personal cars, cash and other valuables taken away.

Kravchenko and Khalin were released after a couple of days, having been forced to write letters of resignation from their posts as deputy mayor.  Kazakov was freed after a Ukrainian General Ihor Voronchenko arrived, together with military spetsnaz officers. Svyetikov mentions another abduction, supposedly also of a ‘separatist’, with this also including the man having his car stolen.

While also not presuming to judge whether the two men now facing charges are guilty, Svyetikov points out that the actions constitute banditry.  He also recommends that Kazakov sue Sobolyev for defamation and says that there is no evidence of the supposed pro-militant leanings.  The fact that Severodonetsk ended up under militant control in May 2014 was the fault of the enforcement bodies.  Including those, he asserts, who are now subordinates of the Prosecutor General.

In conditions of undeclared war against Ukraine, it is probably understandable, yet surely disturbing, that we should be seeing details about Kazakov’s political views as somehow relevant.  The latter may be a reason for checking the reports more scrupulously, but would hardly warrant dismissing allegations of kidnapping, robbery or extortion – in times of peace or of war.