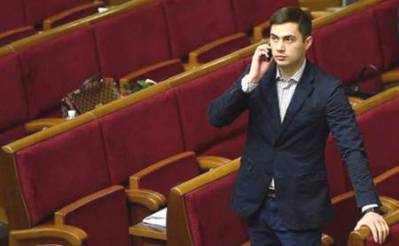 Yehor Firsov before being stripped of his mandate (Photo: Ukrainska Pravda)

A controversial law enabling factions to change candidates after the elections has been slammed by the Council of Europe’s Venice Commission.  The negative assessment, however, came as no surprise since the bill, appropriately called the party dictatorship law by the Committee of Voters of Ukraine [CVU], was adopted despite previous criticism from the same Venice Commission of the constitutional norms used for its justification.

On Feb 16, 2016 the Verkhovna Rada, with a small majority, passed Law No. 1006-VIII on amendments to the parliamentary election law.  These allowed for a candidate in a multi-mandate electoral district to be removed from the candidate list after the election results have been announced, if the decision was taken by a party congress.  The law was to apply to the lists of parties that had taken part in the October 2014 parliamentary elections.

The two main election watchdogs – CVU and OPORA, as well as the authoritative Reanimation Package of Reforms [RPR] all condemned the bill as having grave consequences for party democracy, violating the constitutional principle of direct suffrage and stimulating political corruption.  A political party would be able to exclude candidates from the list after the voters had indicated their choice, thus overriding the election result.  The law also failed to provide clear grounds for removing a candidate.

The NGOs’ calls for President Petro Poroshenko to use his power of veto were ignored, and the bill came into force.  It coincided with the decision by the Bloc of Petro Poroshenko [BPP] to remove two elected MPs – Mykola Tomenko and Yehor Firsov - from office.  The move was especially disturbing since Firsov had left the faction in protest at what he called corruption among the leadership.  Here BPL cited Article 81 of the Constitution.  That norm allows for MPs to be removed if they leave their faction and has also been criticised by the Council of Europe.

CVU Head Oleksiy Koshel pointed to the “extraordinary speed” with which the MPs had been ousted in an interview given to Deutsche Welle.  The decision was taken at a faction congress behind closed doors on March 25, and by March 28 the Central Election Commission had already stripped them of their mandate.

Since the NGOs had cited the Venice Commission’s earlier opinions of constitutional amendments as grounds for Poroshenko vetoing the law, there can have been no  surprises for Ukraine’s leaders in the new assessment.

The Venice Commission pointed out that it had already criticized the possibility allowed for in the 2004 amendments to the Constitution (Article 81) of depriving an MP of their seat because they changed faction.  The new law, the experts note, “further empowers the political parties from stifling political opinion or dissent within its own ranks by allowing them, at their absolute discretion, without any limitation, to remove from the party list a candidate with the potential to be legitimately elected by the voters, after election day and prior to such a candidate being so confirmed as elected by the Central Election Commission.”

This is against international standards and should be removed, the experts conclude in the opinion adopted on June 10-11.   There is no indication thus far of any willingness by Ukraine’s government to adhere to the quite unequivocal criticism from both Ukrainian civic organizations and the Council of Europe’s main legal experts.