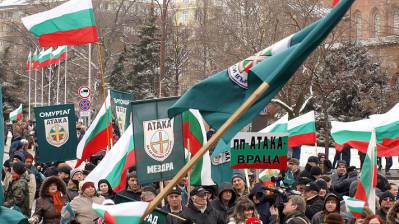 If you believe the media, ‘Bulgaria’ has endorsed the demand of local Ukrainian Bulgarians and called on Ukraine to create a Bulgarian autonomy.  This comes just weeks after Romanians were also reported to be demanding autonomy.  Ukraine, in short, is falling apart, and Crimea and Donbas were just the beginning.

As with all these reports, they immediately spread through the Russian media, with the source, however, always Ukrainian.  In this case it was Holos.ua which obliged by reporting as fact information of seriously dubious quality.

Suspicions as to who may be behind the latest spurt of separatist fakes are only compounded by the obvious attempts to link them with the possibility recently discussed in Ukraine of creating a Crimean Tatar national autonomy.  Since Russia is currently occupying the homeland of this largest indigenous group, President Petro Poroshenko’s statements about possible amendments to Ukraine’s Constitution, recognizing the Crimean Tatars’ right to self-determination elicited from Russia and its occupation lackeys.

The letter in this case claims that the possibility mentioned by Poroshenko creates an important precedent.  Bulgarians living on particular territory, it asserts, are also entitled to such autonomy.  Pro-Kremlin media on June 9 that four regions of Ukraine were ‘already’ demanding autonomy, while the supposed Bulgarian initiative is the second since then which directly claims to be following the ‘precedent’ of Crimean Tatar autonomy.  Even if any of the demands were genuine, they would not bear scrutiny.  The Crimean Tatars are in a specific situation since they are an indigenous people who have no other homeland.

In fact, the supposed ‘author’ immediately on his Facebook page calling the letter a fake and nonsense, and asking for people to send him links to any such reports.

That, in turn, prompted a new opus, originally on the Russian , but faithfully copied onto .  This states that “A Ukrainian party has demanded that the UN defend the Bulgarian community of Ukraine from the SBU’ and claims that the SBU [Ukraine’s Security Service] are putting illegal pressure on members of the Bulgarian community who speak out in favour of Bulgarian territorial autonomy.  In fact, this appeal to the UN High Commissioner for Human Rights is only planned, it transpires, by a certain Edward Kovalenko from a party called the ‘Social-Patriotic Assembly of Slavs – SPAS’.  The party’s site, which seems to be Kovalenko’s own creation, can be viewed , but was almost certainly not examined by Holos.ua when it blindly copied his assertions.   Kovalenko is reported to have asserted that Palichev “dared” to write such a letter and is now facing persecution.  He claims to have spoken personally to Palichev.

So did the author, and on July 11 Palichev stated quite unequivocally that the letter was a fake, and that he had immediately written to all sites he was aware of demanding that they remove it and / or issue a retraction.  He says that he has received many apologies.  He was not aware of Kovalenko’s contribution to the story and is now considering legal action against Holos.ua.

Palichev’s organization, he says, contains only around 40 members who are all in full support of Ukrainian unity.  He is appalled by such overt deceit, which he views as part of the hybrid war being waged against Ukraine.  Palichev had no idea who Kovalenko even was, however he is well-known to those, like Anton Shekhovtsov, who have far-right provocateurs and Kovalenko’s attempts to discredit Ukraine and its leaders were noted as far back as 2004.

It seems that a number of media received the original fake letter, and some unfortunately swallowed it without even thinking to check the information.

It is also disturbing that the Holos.ua report mentions at the end that the Assembly of Romanians of Bukovyna had “also called for territorial autonomy for Romanians in the Chernivtsi oblast”.

If Palichev and his group do exist, the same cannot be said with any confidence about the alleged ‘Assembly’.  As reported, on June 20 this re-emerged after a year’s break to again ‘demand’ greater autonomy for ethnic Romanians and to complain that the rights of minorities are violated in Ukraine.  Those reports cited Ukrainian News as their source, yet had obviously failed to check the link.  Since there was nothing at the ‘source’, the reports proved hilariously confused as to whether the alleged coordinator of the assembly was a man or woman.   A few media proved more vigilant, or had learned their lesson after the first time, and noted the fake.  Holos.ua has clearly not understood to this day, though a quick Google search would, in this case and with most either separatism fakes, have shown a trail leading clearly to Russian and pro-Russian media.

Nor was this all that Holos.ua reported, since it also saw fit, three days after the first material, its readers that “the Bulgarian Ataka Party has supported the creation of a national autonomy of Bulgarians in the Odesa oblast’.  This was then copied almost verbatim by , with the latter, however, entitling the text ‘In Bulgaria they demand that Ukraine create a Bulgarian autonomy in the Odesa oblast’.

Svetoslav Proinov and his ‘Ataka’ party should in no way be equated with Bulgaria as a whole.  It is a far-right party which has demonstrated unwavering support for the current regime of Russian President Vladimir Putin and Russia’s annexation of Crimea and aggression in eastern Ukraine.

‘Ataka’ was also one of the parties involved in propping up a supposed ‘People’s Council of Bessarabia’ in April 2015, and claiming that this was because of ongoing persecution of minorities in the area.  This ‘Council’ cited support from what it called the ‘international community’, including Proinov and Volen Siderov, founder of the Ataka Party.  He was praised during a visit by delegates from this far-right party to Crimea by the occupation regime’s leader Sergei Aksyonov as having been “the only Bulgarian politician after the state coup in Kyiv who gave an objective assessment of what had happened.”

This ‘council’s’ claims of human rights violations were roundly condemned by all national minorities in the Odesa oblast.  Dora Kostrova from the All-Ukrainian Assembly of Bulgarians, for example, them to “explain why they are presuming to speak in the name of our peoples, why they want a repetition of the scenario seen in the east of Ukraine”.  The Odesa-based Dumskaya newspaper pointed out that the ‘council’ was even in Moscow and was made up of Odesan, Moldovan, Transdniestrian and Gagauz civic figures who espouse a pro-Kremlin position.

Some 15 months later, Proinov has repeated the same lies about persecution and demands from national minorities, with Ukrainian websites willing to uncritically repeat all the claims, both from 2015 and now.

The condemnation from the very people supposedly persecuted is ignored, as is the highly questionable right of the far-right pro-Putin Ataka party to speak for anybody except itself and the Kremlin.