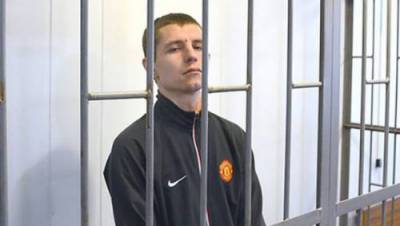 The Russian Memorial Human Rights Centre has declared Ukrainian Maidan activist Andriy Kolomiyets, recently sentenced in Russian-occupied Crimea to 10 years’ imprisonment, a political prisoner.  The renowned rights group demolishes the charges against the 22-year-old, but also points out that the main indictment is grotesque since a court under Russian law has no jurisdiction over events between Ukrainian nationals in Ukraine.

As reported, Kolomiyets was charged with what was qualified as the attempted murder of two Ukrainian Berkut riot police officers during Euromaidan in Kyiv and with transporting hashish.   The first charges pertained to the allegation that Kolomiyets had thrown Molotov cocktails at the two men and came under Article 30 § 3 and 105 § 2 of the Russian Criminal Code, namely “attempted murder of 2 or more people in connection with their official activities … out of motives of political and ideological hatred”.  He was charged also under Article 228 § 2 with transporting “a large amount” of narcotics.  Memorial has looked at the evidence for the second charge and believes it likely that the evidence against him was falsified, and notes also Kolomiyets’ account of the torture he was subjected to.  The first charge is simply not something that a Russian court has any right to address.

Memorial does, however, point out that the same is true of other sentences or ongoing trials in occupied Crimea.  Oleksandr Kostenko is already serving a sentence on equally insane charges, while Crimean Tatar leader Akhtem Chiygoz, Ali Asanov and Mustafa Degermendzhy have been in detention for well over a year charged with involvement in a demonstration that took place in Crimea, but before Russia’s invasion and annexation.

Memorial stresses that the fact that the two officers later took Russian citizenship is immaterial.

Memorial quite rightly does not consider the charges linked with Maidan, however they were insultingly absurd and are thus a chilling warning to other Ukrainians of what they could expect.

At the court hearing immediately prior to the predetermined verdict, Kolomiyets’ lawyer presented documents from Ukraine’s Prosecutor General which pointed out that Kolomiyets was not facing any charges over Euromaidan in mainland Ukraine.  The documents confirmed that while 33 Berkut officers had been injured during the Euromaidan protests, neither of the two alleged ‘victims’ had ever reported any injuries.

The two former Berkut officers claimed to have ‘suffered pain’.  This was presumably memorable enough for them to claim after two and a half years to recognize the young man.

Kolomiyets, in fact, denies ever having hurled any Molotov cocktails on Hrushevsky St, and it is more than likely that a photo proving that he had been on Maidan was all that was required to arrest the Ukrainian.

The case is especially disturbing since there is nothing even linking Kolomiyets with Crimea.  The young man who is from Kyiv oblast was arrested in the Northern Caucuses of Russia on May 15, 2015, where he was living with his partner Galina Zalikhanova and her four children.

When officers turned up on May 15, the first thing they said to her was that Kolomiyets was a Maidan activist.  During the search, they found a small package with some hashish in her ex-husband’s safe.  New testimony was presented at the last court hearing which confirms that Kolomiyets did not have access to that safe.

The story with the ‘drugs’ that Kolomiyets is accused of possessing is quite absurdly implausible.  Zalikhanova says that she had seen enough films to know that she shouldn’t touch the package.  Although the officers were put out and threatened to take her children away from her, she refused to handle the package and they did finally leave without recording the hashish in the protocol.  All of this was seen and has been confirmed by a woman who was staying in their place.

The prosecution then claimed that Kolomiyets had been ‘released’ in Nalchik where he was supposed to have stayed the night at the station, then gone to some field by one taxi, gathered some hashish growing wild, 150 grams of which the officers then ‘found’ in another taxi that he was driving in.  Even if one could believe for a second that the officers had released him, there was no reason for Kolomiyets to have stayed the night at the station, since Galina has three sisters living in Nalchik who would have happily put him up.  She believes that in all of this the same packet found in her ex-husband’s safe has been used.

The charges over Maidan were laid shortly after those for “possession of drugs in a large quantity”.  He received 6 years on the Maidan charge and 4 years for the ‘drugs’.  Worth noting that the use of a second charge, over something almost certainly planted, was first used against Kostenko.

There are other parallels between the cases of Kostenko and Kolomiyets, including the allegations (and evidence) of severe torture.  In Kolomiyets’ case these included the use of asphyxiation and electric shocks.

Kolomiyets was sentenced to 10 years’ maximum security prison on June 10.  The appeal has not yet been heard, but there are unfortunately no grounds for expecting justice to prevail.

There is instead reason to fear that this is not the end to surreal trials of Maidan activists, with the de facto prosecutor Natalya Poklonskaya having already threatened to instigate a large number.  The trials are effectively a ‘reward’ to those former Berkut officers who betrayed their oath to Ukraine and helped Russia seize control in Crimea and a thuggish warning to all Ukrainians.