Kremlin’s Donbas proxies congratulate UK for ’doing what they did’ & voting for BrexitBrexit a gift to Putin, the far right & Trump, a blow to democracyEx-Mayor of London Boris Johnson blames Russia’s annexation of Crimea on the EUWhat European Values if Dutch Referendum Result Stands?Appeal by the leaders of Ukrainian national communities to the Dutch populationFormer Soviet political prisoners call on Holland to say yes to Ukraine’s European futurePlaying with fear and ignoranceHow a democratic tool became a threat to democracyUkrainian Jewish leaders appeal to Holland: Give our country the chance to break with the pastDutch referendum puts Ukraine in spotlightNo surprises as Trump says he could recognize Crimea as ’Russian’ & lift sanctionsMark it down, Mr Trump, Russia has already gone into UkraineFrench Collaborators Kiss Monument to Russian Invaders of CrimeaUK university denies any part in Russia’s latest Crimea propaganda stuntFrench MPs paid from Russian coffers for Crimea propaganda trip?Les collabos français embrassent le monument aux envahisseurs russes en CriméeCrimean Tatar civic journalist sentenced to 11 years for refusing to collaborate with Russia"s FSB Terror by family against Crimean Tatars in Russian-occupied Crimea Unending torture of Crimean Tatar political prisoner for refusal to collaborate with Russia’s FSB Savage sentences against Crimean Tatar journalists for reporting on Russia’s ‘state terrorism’ in occupied Crimea
• Topics / Politics and human rights
• Topics / Point of view

A British Foreign Secretary who excuses Russia’s invasion of Crimea? 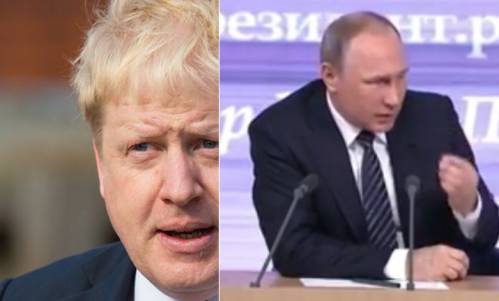 The new UK Prime Minister Theresa May doubtless had her reasons for giving leading Brexit campaigner Boris Johnson a cabinet post.  Making him Foreign Secretary, however, defies any comprehension.  It is especially difficult not to view this as an affront to all those currently facing persecution in Russian-occupied Crimea given his extraordinary attempt to blame Russia’s aggression against Ukraine on the EU.  This was only one of a long list of distortions and lies told to encourage Britons to vote to leave the EU, but it is one which makes the new portfolio a matter of immense concern.

On May 9 this year, during questions and answers after a speech on Europe, it transpired that for Johnson it was not Russia’s invasion and annexation of Crimea and its military aggression in Eastern Ukraine that had caused “real trouble”, but the EU’s actions.

“If you want an example of EU foreign policymaking on the hoof and the EU’s pretensions to running a defence policy that have caused real trouble, then look at what has happened in Ukraine, ” he told reporters.

Johnson later reacted angrily to what he called ‘smears’, denying that he was an apologist for Russian President Vladimir Putin.  He did not explain what he had meant, and what, in his view, the EU had done to stoke tensions in Ukraine.

It was hardly surprising, therefore, that his words were taken as justifying Russia’s actions.  Johnson was, after all, simply repeating a position first taken by the head of the right-wing UKIP party Nigel Farage in a speech soon after Russia’s invasion of Crimea.  In March 2014, Farage accused the EU of having “blood on its hands” for encouraging the turmoil in Ukraine which had supposedly led to Russia’s annexation of Crimea.  This was recalled days later when he was reported as saying that “Vladimir Putin is the world leader I most admire”

Farage’s view of Putin and his slanted view of Russia’s aggression against Ukraine are shared by France’s far-right leader Marine Le Pen, and in fact most far-right parties in Europe (Hungary’s Jobbik, Bulgaria’s Ataka, Poland’s Falanga and many others).  It is their members, including some individuals known for their neo-Nazi views like Luc Michel and Manuel Ochsenreiter, who are regularly invited to act as ‘observers’ rubberstamping Russia’s ‘Crimean referendum’ and ‘elections’ in Donbas.

It was undoubtedly Ukrainians’ support for closer ties to Europe and Ukrainian President Viktor Yanukovych’s reneging on his pre-election promise to sign the EU-Ukraine Association Agreement that sparked Euromaidan and the end of the Yanukovych regime.  Yanukovych had been heavily backed by Putin, and fled to Russia, together with the cronies directly implicated in the gunning down of peaceful protesters.

None of the reasons later given by Putin to justify the seizure of control by Russian troops of Crimea were substantiated.  Violent deaths, disappearances and arrests of opponents have all come under Russian occupation.  There was no evidence of any such excesses before Feb 27, 2014.

Johnson was likely parroting the line taken by Brexit lobbyists who clearly blamed the EU for somehow encroaching on ‘Russia’s patch’.  The Brexit camp, we learned, “believe that the EU’s eastwards expansion into former Warsaw Pact countries, as well as its attempts to reach economic deals with former Soviet states like Ukraine and Georgia, has provoked Russia into adopting a more aggressive military stance in areas like Crimea.”

In a nutshell, they appeared to be saying, Russia was left no alternative but to invade and annex Ukrainian sovereign territory.

This is essentially the line taken by the Kremlin, and all its friends.

It is also, disturbingly, the line which at least in 2014 was taken by the now Labour Party leader Jeremy Corbyn and appears to be held to this day by his close aide Seumas Milne.  The bogeyman for them is NATO rather than the EU, though their perceived failure to firmly campaign against Brexit has been presented as the main reason for the leadership challenge currently underway.

Britain, together with Russia and the USA, were signatories to the 1994 Budapest Memorandum which guaranteed Ukraine protection of its sovereignty and territorial integrity in exchange for giving up one of the largest nuclear arsenals in Europe.  Neither the UK, however, nor other western countries reacted adequately to Russia’s invasion of Ukraine.

The UK has, however, since taken a strong stand in supporting sanctions against Russia, imposed after Russia’s aggression in eastern Ukraine and the downing by Kremlin-backed militants of the Malaysian MH17 airliner on July 17, 2014.

Britain’s robust position was greatly appreciated, as was its acknowledgement of the grave human rights concerns in Crimea under Russian occupation.

What Johnson thinks appears to depend on the circumstances.  Certainly, in an article from December 2015, while advocating fighting on the same side as Putin and Bashar Assad in Syria, he was at least critical of Putin (though later effusive in his praise of Putin’s bloody Syrian campaign which is believed by human rights NGOs, like Amnesty International, to have sometimes targeted civilians).

It is, however, the Johnson of the Leave campaign whom the UK’s new Prime Minister has seen the need to appoint to a high-ranking post in her government, and his position on Ukraine and Crimea are therefore seriously alarming.

Any blinkered presentation of Russia’s invasion of Crimea and the pseudo-referendum used to justify annexation flies in the face of the facts and begs the question of why Russia needed to bring in all its Eurosceptic friends from the far-right and far-left to act as ‘observers’.

The abductions and disappearances began after annexation and are continuing with the latest victim – Ervin Ibragimov – a prominent Crimean Tatar activist.

The Crimean Tatars, the main indigenous people of Crimea, faced persecution from the outset and this has now escalated with the criminalization of the Mejlis, or Crimean Tatar representative assembly. Three Crimean Tatars, including Akhtem Chiygoz, Deputy Head of the Mejlis, have been in detention for well over a year on surreal charges over the pre-annexation demonstration on Feb 26, 2014, which prevented Russia from carrying out a coup and seizure of power without deploying soldiers.

There are a number of Crimean opponents of annexation in Russian prisons, including renowned Ukrainian filmmaker Oleg Sentsov.  In Crimea, 14 Muslims, almost all Crimean Tatars, have so far been arrested and face huge sentences on totally fabricated charges.  Other Ukrainians, including Mejlis leader Ilmi Umerov and journalist Mykola Semena are facing prison sentences for what Russia labels as “public calls to violate Russian territorial integrity”, otherwise known as recognizing Crimea as Ukrainian and wanting its return to Ukraine.

All of this, and much more, is the direct result not of the EU’s support for Ukraine, but of Russia’s invasion and annexation of Crimea.