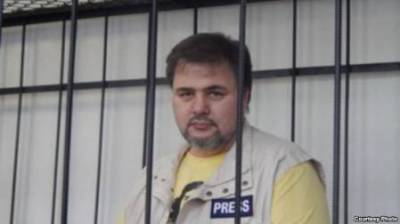 Ruslan Kotsaba, a controversial blogger and Ukraine’s first Amnesty International prisoner of conscience in 5 years, has had his conviction and 3.5-year sentence for supposed obstruction of the Ukrainian Armed Forces quashed.  He was released in the courtroom after over 18 months held in detention.

Radio Svoboda reports that the Ivano-Frankivsk Court of Appeal considered the appeal on Thursday, July 14, for around 4 hours before deciding that the charges were unwarranted and revoking the original conviction.  Disturbingly, the prosecution also appears to have appealed against the earlier rejection of the more serious charge, and demanded, on the contrary, that Kotsaba be imprisoned for 13 years.  The defence had asked for the conviction to be revoked and Kotsaba acquitted for lack of a crime.

As reported, on May 12, 2016 the Ivano-Frankivsk City Court found Kotsaba guilty of obstructing the legitimate activities of the Ukrainian Armed Forces over a video in which he expressed his negative attitude to mobilization. The court did, however, acquit him of the more serious, and absurd, charge of ‘state treason’.  The journalist and blogger was sentenced to three and a half years.  He had already spent 14 months in detention by that time.

Since the prosecution had asked for 13 years, the fact that the court rejected the more serious of the charges already demonstrated some degree of independence, but not enough since both charges were extremely dubious.

So too was Kotsaba’s ongoing detention, which prompted Amnesty International in its annual report released in Feb 2016 to declare him a prisoner of conscience.

Kotsaba was arrested on Feb 7, 2015 and charged with State treason (Article 111 § 1 of Ukraine’s Criminal Code) and under Article 114-1 § 1.  The latter article covers espionage, although in Kotsaba’s case, he was accused of having obstructed the lawful activities of the Armed Forces and other military formations.

The charges were based on a video in which he opposed the mobilization drive in Ukraine, on his cooperation with Russian pro-Kremlin media and, effectively, on his expression of his views.

The six-page indictment began with reference to the video appeal to President Petro Poroshenko entitled “I reject mobilization” which Kotsaba posted on YouTube on Jan 17.  On this video he publicly called on “all adequate people” to refuse mobilization, asserting that it had been declared in breach of Ukraine’s legislation.  The prosecution alleged that Kotsaba gave false information to back his claim to likely conscripts that mobilization is unlawful and that there is unwarranted fratricide in civil war in Donbas.  The indictment asserted that the said video had “received a significant number of hits in the Internet and had been circulated among compatriots”.

The video had, in fact, been seen by a very modest number of people until the SBU – Ukraine’s Security Service - made its author well-known.  By now it has been viewed by over 437 thousand people and remains freely available on YouTube.  No evidence was provided during the court hearings that anybody had been influenced by the video.  Yet the prosecution claimed that the video fell under Article 14 as being ‘subversive activities obstructing the armed forces”.

There are many Ukrainians who are fully aware that Russia is the real aggressor but who also consider the mobilization to be legally questionable since Ukraine has not formally declared a state of war.

There were simply no grounds for the more serious charge of state treason, and the court hearings were an embarrassment, with the only witnesses effectively only expressing outrage at Kotsaba’s views.  It is galling, therefore, that the prosecution continued to ask for a conviction for treason.

The lack of substance to the case was seen also in the indictment’s list of occasions where Kotsaba entirely legally gave interviews to Ukrainian and Russian television channels.  During these he spoke about his video and expressed the view that the events in eastern Ukraine constitute civil war.  There was only one occasion where a Russian channel offered Kotsaba money for his reports which he himself always posted on YouTube.

Ukraine’s Independent Media Union of Ukraine voiced concern immediately after Kotsaba’s arrest, pointing to the dangerous precedent it set.  “Regardless of the questionable nature of Ruslan Kotsaba’s activities, criminal prosecution creates a precedent when any journalist or public activist will be accused of state treason for utterances which contradict the official position of the state authorities”.

Kotsaba’s collaboration with the Russian media, his assertions about a ‘civil war’ and denial of the essentially undeniable role of Russian soldiers and mercenaries in Donbas certainly antagonized many people.  There are many views that in a democratic country we find repugnant but must live with.  There were no laws preventing him from giving interviews to the Russian media, nor, thankfully, to stop him expressing his views.  All too late in the day, this has been confirmed by a Ukrainian court.