UN report finds killings on both sides in Donbas, yet misses Russian soldiers 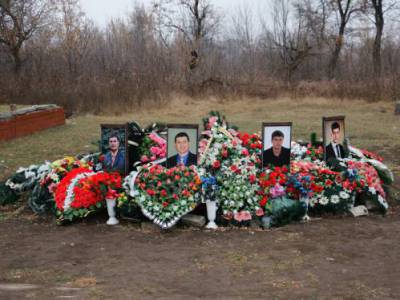 Four members of a Sloviansk evangelical chuurch murdered in June 2014

While warning that there must be accountability for all killings, and pointing out that some may constitute war crimes, the UN Monitoring Mission has chosen to ignore substantial evidence of direct engagement by Russian military personnel in the fighting in Donbas and in shelling from military positions in Russia

A UN report on killings in eastern Ukraine and Crimea since January 2014 writes of ‘rampant impunity’ and gives a damning assessment of the investigation and prosecutions over the disturbances and fatal fire in Odesa on May 2, 2014.  It suggests that some of the killings may amount to war crimes and / or crimes against humanity.

The UN Human Rights Monitoring Mission does, however, present a rather controversial list of participants in the conflict in eastern Ukraine.  It states:

“The armed conflict in certain districts of Donetsk and Luhansk regions, which has been ongoing since mid-April 2014 and which is fuelled by the inflow of foreign fighters and weapons from the Russian Federation, including former servicemen and servicemen on leave, accounts for the majority of violations of the right to life in Ukraine over the last two years.”

This is a presentation that Moscow may find palatable, but it is scarcely accurate, and is not even borne out by the people the mission interviewed, at least one of whom speaks of a Russian major among his tormenters.

Yevgeny Yerofeyev and Aleksander Aleksandrov, the two Russians captured in the Luhansk oblast in May 2015 and exchanged for Nadiya Savchenko were absolutely consistent in identifying themselves to the OSCE, the Red Cross, a Russian human rights activist and independent Russian journalist, and others as acting Russian GRU military intelligence officers.  They were to change their story only much later, and go along with Russia’s claim from the outset that they had left the military and ‘volunteered’ to fight with the LNR militants.

It is likely that most of a Pskov paratrooper regiment were killed in Donbas in August 2014.  Russian rights activists and independent investigators have since documented many other cases of Russian soldiers, including conscripts, who were sent to fight and who were killed in eastern Ukraine.  Russian President Vladimir Putin then issued an illegal decree classifying as secret information about losses during so-called ‘special operations’ in peacetime.

There was plenty to conceal – both the losses and the direct Russian military involvement particularly seen during the battle near Ilovaisk, but throughout the conflict.

In his RUSI report Russian Forces in Ukraine published in March, 2015, Igor Sutyagin writes: “The first operational successes of Ukrainian forces in late June and early July 2014 first prompted Russian artillery fire from within Russian territory, targeted against advancing Ukrainian troops on their own soil, from mid-July onwards. Direct intervention by Russian troops in combat roles then followed in the middle of August, when the prospect of rebel defeat had become realistic. The presence of large numbers of Russian troops on Ukrainian sovereign territory has, more or less, since become a permanent feature of the conflict.”

As reported, rights activists have just published important evidence of both direct shelling and military intervention from Russia.  They stressed the importance of demonstrating that the conflict is of an international nature since this will help victims defend their rights in international courts.

Since the UN monitors write that some of the killings they have documented may count as war crimes, they should not be glossing over the huge role played by the Russian military in the conflict.

The problem with such reports is the huge scope, and what gets lost in journalists’ brief summaries.  There is an important – and damning – assessment of the Odesa 2 May investigation and prosecutions, the latest of many that the Ukrainian authorities are largely ignoring.

There are, however, some frustrating aspects with respect to Crimea.  While the monitors are indeed hampered by Russia’s ongoing refusal to allow monitors unimpeded access to Russian-occupied Crimea, there is more information available about the demonstration on Feb 26, 2014 when two people died which the monitors could have used.  They instead cite the ‘investigators’ without mentioning at all that the prosecution in question is one which Russia has no jurisdiction over, which is targeting only Crimean Tatars and most specifically the Deputy Head of the Crimean Tatar Mejlis or representative assembly, Akhtem Chiygoz.

The death of Dmytro Shabratsky, it should be noted, has been raised repeatedly over the last month by human rights activists and the lawyer representing his family, Yevhenia Zakrevska in connection with the arrest of a former member of the Aidar Volunteer Battalion Ihor Radchenko.  As reported, the arrests of Radchenko and ex-Aidar commander Serhiy Lykholit have been treated by many former volunteer fighters and some MPs as persecution of national heroes.  It was due to their intervention, for example, that Radchenko was released from custody despite considerable evidence against him and the objections from Zakrevska and others.

The monitors believe that up to 2 thousand civilians may have died in the conflict, with nearly 90% of these due to indiscriminate shelling of residential areas.

In the press release, the UN High Commissioner for Human Rights, Zeid Ra’ad Al Hussein states that “accountability will be key to the establishment of sustainable peace in Ukraine, including in the eastern part of the country”.

Accountability is indeed vital, but a step towards this is surely identifying all those responsible.  The monitors’ recommendations mention Russia only in relation to Crimea.