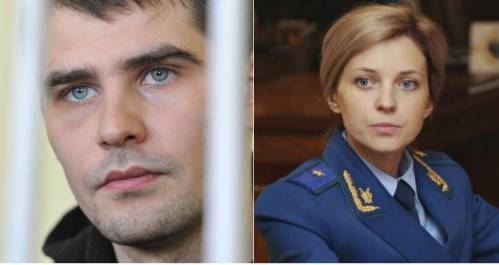 Yevhen Kostenko has been fined for showing disrespect to the judge who handed down a knowingly unjust sentence against his brother and Maidan activist Oleksandr Kostenko on May 15, 2015.  The latter was sentenced to over 4 years’ imprisonment for an unproven offence during Euromaidan in Kyiv over which a court under Russian law had no jurisdiction.

On July 18, Yevhen Kostenko was ordered to pay 60 thousand roubles for supposedly carrying out his “criminal intent to insult judge Vladimir Mozhelyansky” by showing the finger.   In his ruling, judge D. Berberov stated that the middle finger represents the male sexual organ, without making it clear why he thought so.   The restraint order against Kostenko, preventing him from leaving Crimea, remains in force until he pays the fine.

The charges against Yevhen Kostenko were first reported by his brother’s lawyer Dmitry Sotnikov who was blunt in calling them part of the general offensive against his client’s family, with this having including searches of homes despite the presence of very small children.  Sotnikov pointed to Mozhelyansky’s close collaboration with the occupation regime and noted that he had even directly insulted Oleksandr Kostenko during the trial, and been disrespectful to his mother, with this prompting Sotnikov to lodge a disciplinary complaint against him.  The Crimean Human Rights Group points out that Ukraine has initiated criminal proceedings against both Mozhelyansky and Berberov for state treason.

Sotnikov then said that the charge of ‘insulting’ the charge dated back to the court hearing just prior to sentence being passed.  In protest that even on the eve of the sentence his client was being beaten and refused food, Sotnikov left the court, with all members of the Kostenko family also leaving.  According to Sotnikov, Yevhen had a nervous twitch because of the strain they were under.  The court bailiffs interpreted his movement as an indecent gesture and demanded a formal explanation.  He explained that it had been a spasm and apologised to the judge if his gesture had been misinterpreted.

The authoritative Memorial Human Rights Centre has declared Oleksandr Kostenko to be a political prisoner and pointed to the legal absurdity of the entire prosecution.

Oleksandr Kostenko is a Ukrainian citizen sentenced by a Russian-occupied Crimean court to 4 years’ imprisonment over an unprovable offence which allegedly took place during Euromaidan in Kyiv, well before Russia invaded and annexed Crimea.  The court ignored the evidence that his first ‘confession’ had been tortured out of him, and flagrant infringements of procedure from the moment of his arrest.

As well as the lack of any jurisdiction, the actual charge of slightly injuring a Ukrainian Berkut special force officer during the Euromaidan protests was fundamentally unprovable.  This did not stop Natalya Poklonskaya, installed as Crimean prosecutor by the occupation regime, from demanding a sentence of 4.2 years which Mozhelyansky obligingly provided.

The Maidan activist was convicted of slightly injuring a Ukrainian Berkut riot police office in Kyiv on Feb 18, 2014.  Even without the lack of jurisdiction, the charges were also comical in their absurdity.  He was, nonetheless, found to have deliberately aimed a cobble stone at the Berkut officer who had suffered a bruise on his left shoulder as a consequence.  Kostenko was supposed to have been motivated by “a feeling of ideological hatred and enmity to law enforcement officers”.

The conviction which will assuredly be condemned by the European Court of Human Rights has been through all appeal levels.  No court had the courage to dispute the fundamentally lawless conviction, although his sentence was reduced to 3.5 years. On June 16, a court in Kirov (Russia) where Kostenko is being held also ignored the Russian Supreme Court’s guidelines on parole, demonstrating yet again the political nature of the entire case.