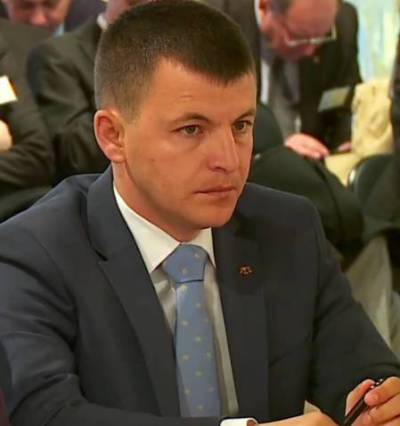 17 July is the 31st birthday of Ervin Ibragimov, the Crimean Tatar activist abducted on May 24 this year from near his home. There has been no sign of him and there is nothing to indicate that the de facto authorities are making any real effort to find his abductors.  That is if we assume that they were not behind his abduction. This is the latest of many forced disappearances since Russia invaded and annexed Crimea.

“Some people’s children are being prosecuted, but they at least know where.  We don’t know. During the day it’s still endurable but when the evening falls, it’s very hard.  During the day, I find some way to deceive myself, but the evenings are very bad”, she says.  She sits outside and remembers the video showing her son seized and pushed into the van.

Ervin Ibragimov is a member of the Executive Committee of the World Congress of Crimean Tatars and prominent in the Bakhchysarai Crimean Tatar community.  There is every reason to believe that he was abducted because of his active position.  He was seized at around 22.30 the night before a scheduled court hearing against Crimean Tatars detained for taking part in a remembrance event for the victims of the Deportation.  Ibragimov was planning to attend together with Ulmi Umerov, one of the Crimean Tatar Mejlis [representative assembly] leaders.  Umerov is now facing criminal charges, with a potential 5-year prison sentence, for affirming the international recognized fact that Crimea remains part of Ukraine and Ibragimov has not been seen since being forced against his will into a van by men who may have been in uniform..

The young man had been followed before his disappearance, and men in police uniform had stopped outside his home.  Suspicions were only exacerbated when the FSB [Russian security service] initially refused to accept the report from Ibragimov’s family and only initiated an ‘investigation’ after hundreds of Crimean Tatars ignored the likely risks under Russian occupation of reprisals and FSB surveillance and gathered outside the police headquarters demanding action in finding Ibragimov.  After publicity outside Crimea, the Russian authorities finally placed Ibragimov on the federal search list, but there is no other evidence that they are making any effort to find him.

This is despite CCTV recordings fixing the exact time of the on May 24.  The video footage shows a number of cars driving past, as well as a young couple on foot who might possibly remember something.  It seems that at one point, Ibragimov, clearly understanding the danger,  tried to flee, but was seized.   A Crimean site quoted a source in the police as saying that a local resident had found Ibragimov’s documents near a café in Bakhchysarai and handed them to the police.

This is not the first time that the de facto authorities have done next to nothing despite ample leads.  In all the cases, it is difficult not to suspect that this is because they know exactly who is behind them.  (see, for example, The Deaths & Disappearances in Crimea Putin Lied About)

Further grounds for suspicion have emerged with details of the apparent attempt to abduct Emir-Huseyn Kuku, a Crimean Tatar lawyer and rights activist on April 20, 2015.   Kuku is well-known in the Yalta region and his cries for help were heard.  After a number of cars stopped and a crowd gathered, the two assailants suddenly pulled out weapons, this coinciding with the appearance of a white van and Kuku being taken away for a ‘search’ by FSB officers.  It seems extremely likely that Kuku’s attempt to have the officers brought to answer for his effective assault led to his arrest in February 2016.  He is now among 14 Crimean Muslims facing trumped-up charges of involvement in the Hizb ut-Tahrir organization, a pan-Islamist movement which Russia declared ‘terrorist’ without any grounds at all.  The organization is legal in Ukraine and most other countries, but Russia uses the never explained decision to declare it terrorist as a way of sentencing Muslims to very long terms of imprisonment on fictitious ‘terrorism’ charges.

In Kuku’s case, there is every reason to believe that he is facing persecution for his rights activities and for exposing an apparent abduction-turned-FSB-search.

Ervin Ibragimov was abducted late at night, when shouts for help would not have been heard.

His family, friends and many other Crimean Tatars will be gathering for prayers at 19.00 on his birthday.

Please show solidarity and not only through prayer.  Ervin Ibragimov is the latest victim of the terror against Crimean Tatars and all opponents of Russian occupation.  He will not be the last without pressure from western governments and the international community.