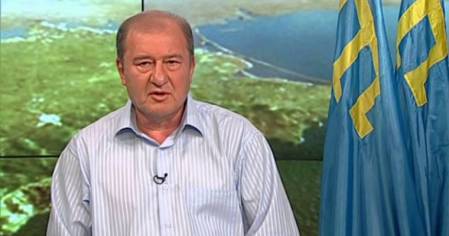 Praising terrorism on state television and suggesting it’s good for Russia if it spreads does not fall under Russia’s ‘anti-extremism’ laws.  Criticizing Russia’s occupation of Crimea, on the other hand, can get you placed against your will in a psychiatric hospital and / or jailed.

Crimean Tatar leader Ilmi Umerov is facing a possible 5-year sentence for saying that Russia should be forced to leave Crimea and Donbas.  This is the same position as that taken by all democratic countries, yet a Simferopol court under Russian occupation (judge Tatyana Rube) has ordered that Umerov be forcibly placed in hospital for psychiatric assessment.

Umerov, who recently turned 59, is in poor health with a heart condition and a number of serious medical complaints.  Any unnecessary hospitalization and medical procedures are potentially dangerous, and he himself was taken ill during the court hearing, with fears that he might have had a heart attack. He has been hospitalized in the cardiac unit.

It was doubtless his state of health that restrained Russia from holding Umerov in custody, but they have now resorted to another relic of Soviet times – claiming that those who tell the truth are ‘crazy’.

It is Russia as occupying state that has tried to push the idea that the Mejlis is a ‘civic organization’.  The Mejlis is the self-governing body of the main indigenous people of Crimea and its ban, according to Oliver Loode, a member of the UN Forum on Indigenous Issues, should be viewed as an attack on the Crimean Tatar people.

Umerov believes that the forced psychiatric assessment is aimed at declaring him mentally unfit as an attempt to discredit his views and the Mejlis.  The prosecution, for example, proved in court to have attached the testimony of a doctor prepared to assert that Umerov’s neurological complaint could lead to psychiatric problems.  Where they got this doctor from is unclear, and he had not consulted with the doctor Umerov has been under for many years.

Umerov was initially detained on May 12 and has been charged under the articles of Russia’s criminal code on ‘extremism’ because of comments made in an interview to ATR TV on March 19, 2016 about Russia’s occupation of Crimea.

That interview in Kyiv came three days before Russian MP Vladimir Zhirinovsky stated on Russian State TV that “terrorist attacks will take place throughout Europe.  And that is in our interests.  Let them all perish and die.  What are you waiting for?  Let’s do it ourselves.”   Zhirinovsky faced no legal or other consequences.

Nor is this because of any parliamentary immunity.  Igor Girkin has also not been charged despite openly admitting to war crimes while leading the Kremlin-backed militants who seized Sloviansk and other cities in eastern Ukraine in 2014.  Russian fascist ideologue Aleksandr Dugin can be easily heard or read in the Russian media and on social networks saying that all Ukrainians should be killed, or calling for the dismantling of the border between Ukraine and Russia, with Ukrainian border guards eliminated as ‘illegal armed groups’.

Ilmi Umerov, a Ukrainian national, is not the first person to be facing imprisonment for expressing the same position on Russia’s occupation of Crimea as that of all western countries and the UN General Assembly.  Those Russia can prosecute, it does, with this tragically including Ukrainians in Russian-occupied Crimea.  The new Article 280.1 of the criminal code, punishing for so-called “public calls to action aimed at violating Russia’s territorial integrity’ has, as feared, been used against critics of annexation.  Russian Tatar Rafis Kashapov is serving a three-year sentence for four social network posts criticizing Russia’s annexation of Crimea, and Russia has lodged a number of such criminal prosecutions against Crimeans, including Umerov, the forcibly exiled head of the Mejlis Refat Chubarov and journalist Mykola Semena.  The latter two have already been placed on Russia’s huge and highly specific ‘list of terrorists and extremists’.

After initially detaining Umerov on May 12, he was released on a signed undertaking to remain in Crimea, however a search was carried out of his home.  While this was underway, several hundred Crimean Tatars ignored possible reprisals from the FSB and gathered outside.  They called out that it was not they who were the traitors but those now coming to arrest people.  Umerov himself later pointed out that this is indeed the case.  Those who betrayed Ukraine and now serve Russia are actively persecuting those who remained faithful.  The vast majority of Crimean Tatars do not accept Russian occupation and continue to insist that Crimea is a part of Ukraine.

The charges against Umerov were formally laid on May 19 in a decision issued by FSB senior lieutenant I.A. Skripka.  The alleged public calls, according to this document, were made during an interview given in Crimean Tatar to TV ATR while visiting Kyiv on March 19, 2016.  A senior FSB official is in all seriousness accusing Umerov of having “with intent to carry out activities aimed at violating the territorial integrity of the Russian Federation, … deliberately and publicly called on an unlimited number of people to carry out actions aimed at returning the Republic of Crimea under Ukraine’s jurisdiction”.

This seditious deed was then posted on YouTube, with the said video containing the following words spoken by Umerov:

On August 3, the Memorial Human Rights Centre condemned the charges against Umerov as politically motivated and called for their immediate withdrawal.

The human rights group joined others in noting that Umerov had expressed an opinion shared by most of the international community and many Russians.  You would have to look to the extreme right for views similar to those expressed by Zhirinovsky, Girkin or Dugin.

It is Umerov who faces a forced psychiatric assessment and, conceivably, a long prison term.