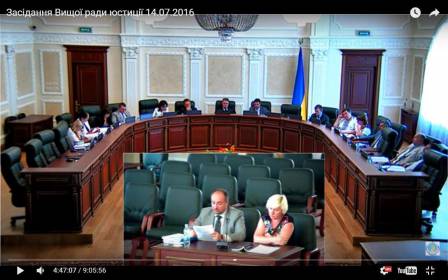 The High Council of Justice has decided that Ludmila Kozyatnik, who was directly implicated in the persecution of Euromaidan activists, is innocent and should not face dismissal from her judge’s post.  Roman Maselko, who represented one of the people whom Kozyatnik stripped of their licence is disgusted.  He notes that the High Council of Justice [HCJ] has thus far only upheld 63% of the special investigative committee’s decisions calling for judges’ dismissal.  If this continues, he says, only a small percentage of around 330 judges who persecuted Maidan activists will be dismissed.

On July 14 HCJ decided that Kozyatnik, a judge at the Shevchenkivsk District Court in Kyiv could not be dismissed.  Kozyatnik had stripped Nina Zenich and four other Automaidan drivers of their licence for 6 months on the basis of falsified documents.

Maselko defended Zenich in court and remembers the case very well.  She was accused of not having stopped although she had been nowhere near the place in question, with this being confirmed at the 3-hour-long court hearing by 6 witnesses.

The traffic police inspector, when questioned, either refused to answer or claimed to not remember.

Maselko asserts that Kozyatnik behaved very aggressively to the defence witnesses, trying to find even the smallest inaccuracy, while, on the contrary, preventing the defence from demanding details from the traffic inspector.  She rejected all the defence’s application for additional evidence to be provided.

The decision to deprive Zenich of her licence was particularly brutal.  Zenich has two small children, one of whom is disabled and needed to regularly be taken to see doctors.  Kozyatnik was well aware of this, and even claimed in the court ruling to have taken this fact into account, yet still imposed the maximum penalty.

Maselko notes that despite the numerous incidents during Euromaidan where activists’ cars were set alight, Zenich had been willing to appear at a press conference, exposing the falsification and the bias shown by judges.

The HJC had even been asked to consider Kozyatnik’s case because of an opinion from the High Qualifying Commission of Judges which considered that Kozyatnik had breached her oath and should be dismissed.

Why the HJC has found otherwise and says that Kozyatnik did not breach her oath remains unclear.  Maselko notes that this is not the first time that the HJC has handed down such questionable decisions.  He expresses concern that a body which has yet to earn public trust will soon receive the authority to dismiss and appoint judges itself.

This latest decision by the HCJ comes only two days after Ukraine’s Supreme Court found that three judges - Alla Chalaya, Yulia Shvachach and Vitaliy Martsynkevych  -had violated their oaths by detaining activists.  Ironically, in that case, the HCJ had taken the same position, with the High Administrative Court revoking its decision.

Back on Dec 29, 2013, Automaidan activists took part in car processions to President Viktor Yanukovych’s controversial residence at Mezhyhirya and the sumptuous homes of others in high positions.

Those activists and journalists who took part were subjected to intimidating ‘visits’ from traffic police officers, and many lost their licences, on the pretext that they had failed to stop at the demand of police officers.

Ukrainska Pravda was able to demonstrate that the protocols used against AutoMaidan activists to justify stripping them of their driving licenses were falsified, with one traffic inspector’s name but three totally different signatures.