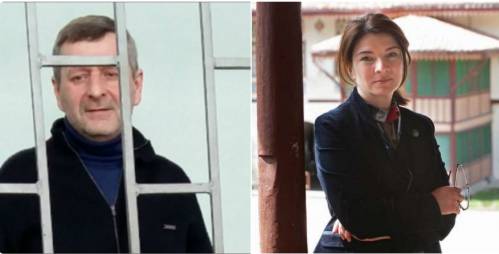 Russia’s most openly lawless prosecution since occupying Crimea has descended to a new low with the refusal to allow Crimean Tatar leader Akhtem Chiygoz to even attend his own court hearings and the unfounded decision to separate the proceedings into two trials.

A new preliminary hearing into charges against Chiygoz and five other Crimean Tatars in connection with a pre-annexation demonstration on Feb 26, 2014, over which Russia has no jurisdiction took place on July 20.  There were initially few surprises with the detention extended, despite the lack of any grounds, of Chiygoz, Ali Asanov and Mustafa Degermendzhy, all of whom have been in custody for well over a year.

The Crimean Supreme Court under occupation also, however, ordered that the charges against Chiygoz, the Deputy Head of the Crimean Tatar Mejlis [representative assembly] – of ‘organizing a mass riot’ be tried separately from those of participating in such a ‘mass riot’ against Asanov, Degermendzhy, as well as Eskender Kantemirov; Eskender Emervaliyev and Arsen Yunusov (who are not in detention).  The defence objected and intend to appeal against this decision which they believe is aimed at dissipating support for the men involved and attention to the case.

The wish to minimize public attention to the persecution of the highest-ranking Mejlis leader in Crimea almost certainly prompted another decision.  The court allowed Dombrovsky’s application for the court hearings to be held by video link from the prison where Chiygoz is being held.  The pretext given, though in no way substantiated, was that this was out of concern for the safety of the so-called ‘victims’.

Chiygoz’s wife Elmira Ablyalimova is in no doubt that the decision was taken to try to silence Chiygoz, who has spoken out with passion and authority from the courtroom.  She points out that the video link can be cut at any moment, and doubtless will if they don’t want him to be heard.  He is also in a far worse situation since he will be deprived of the right to directly and swiftly consult with his lawyers, who will instead need to visit him in the SIZO or remand prison where he has been held since January 29, 2015.  All of this must also significantly drag out the trials.

“The authorities are trying to divide the defendants to prevent a mounted defence”. This, she says, is because it was so clear during the first court hearings that all six defendants, as well as the lawyers and civic defenders were all together and had prepared a united defence.  “This seriously weakened the public prosecution which is in any case based on flagrant falsifications and violations of legislation”.

The first preliminary hearing had been on Dec 28, 2015 with only a few hearings before being returned to the prosecutor because the shoddiness was too glaring.

It is possible that the visit to Crimean of a Council of Europe fact-finding mission on January 27 prompted the hearing that day to be postponed within minutes of starting, and the subsequent decision to send the case back for some cosmetic work.

Ironically, any fears of Council of Europe scrutiny proved frustratingly unwarranted.  The report by Ambassador Gérard Stoudmann mentioned only that they had visited Chiygoz at his request, and that Chiygoz had “questioned the lawfulness of his arrest”.

A recent UN report on killings over the past two and a half years mentioned the two people who had died during the demonstration on Feb 26, 2014, while only citing the ‘investigators’’ version of events, and making no mention of the fact that the prosecution was illegal.

Other reports have been equally inadequate.  The 13th UNHCR report recommended only that the de facto authorities and Russia “ensure due process and fair trial rights for Crimean Tatars detained in relation to the February 2014 demonstration”.  There can hardly be a fair trial on charges which defy all principles of law?

In its 14th report, the UNHCR was slightly clearer, but only because of the later trial of Andriy Kolomiyets, the Ukrainian Maidan activist recently sentenced to 10 years on absurd charges linked with Euromaidan in Kyiv.  UNHCR now mentions “serious concerns of compliance with the principle of legality, and particularly the retroactive application of the law.”

They should be less delicate in their wording since there is no compliance.  The men are all charged under Russian law over a demonstration which took place on Feb 26, 2014 in Ukrainian Crimea before Russia’s invasion and annexation of Crimea and therefore under Ukrainian law.

Only Crimean Tatars have been targeted, although as well as around 10 thousand Crimean Tatars, there were a few thousand pro-Russian demonstrators outside the parliament buildings on Feb 26, 2014.  They were led by Sergei Aksyonov, the leader of a marginal pro-Russian party, who took control the following day with the help of Russian soldiers.  There are, in fact, grounds for believingthat the pro-Ukrainian demonstration on February 26, 2014, stopped Russia from achieving an effective coup without having to openly (if long denied) bring in Russian soldiers.

Although the deaths are constantly mentioned to give the impression of real crimes, not one of the men is charged in connection with them.  It is in fact unclear what specifically the men are supposed to have done, and it is very likely that Asanov, who has four small children and Degermendzhy are in custody for their integrity in refusing to testify against Chiygoz.

The Russian Memorial Human Rights Centre issued a statement on Feb 15, 2016 declaring Chiygoz, Asanov and Degermendzhy political prisoners.  It pointed to the clear lack of jurisdiction and dismissed the formal excuse presented that two of the alleged ‘victims’ are Russian nationals.  Neither had sought medical treatment at the time, and Memorial noted that both in their cases, as in those of over half the alleged ‘victims’, there were serious doubts as to the authenticity of any injuries.  They pointed out also that the fact that only Crimean Tatars had been targeted was an indication of the political motives behind the prosecution.

With respect to these ‘victims’, Novaya Gazeta reported in late February 2015, a month after Chiygoz’s arrest, that the Russian Investigative Committee had been short of ‘victims’ and witnesses, and on February 2, 4 days after Chiygoz’s arrest and 11 months after the events, had invited Simferopol residents to come forward “even in the absence of bodily injuries”.

These supposed victims are now being cited as the excuse for depriving Chiygoz of his right to be present at the trial.  The security concerns are as fictitious as the grounds for this lawless persecution of a Crimean Tatar leader and other Crimean Tatars who have refused to give false testimony against him.