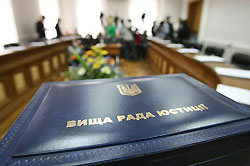 The Reanimation Package of Reforms on President Petro Poroshenko to propose amendments to the law on the High Council of Justice.  They believe that the law as it stands at present would preserve the current unreformed state of the judicial system.

The on the HCJ was drawn up by the Council on Judicial Reform, and RPR does support the progress made.  It warns, however, that the draft bill contains provisions which could lead to stagnation of the judicial system in its present state for years.

The requirement that a person must have 10 years’ experience of work as a judge to become one of the judges on the HCJ will mean that the latter will be made up of judges from the old judicial system, rather than new blood.

RPR also believes that the draft bill endangers transparency of HCJ work and justice in general.  It does not allow for effective consideration of disciplinary cases against judges and makes it possible for them to avoid being held to answer.

There is, on the other hand, no mechanism for dealing with complaints from judges about interference in their work.

RPR therefore calls on the President to take their comments and recommendations into consideration before submitting the bill to parliament.

removing the 10-year requirement and believe that the general demand that any candidate have 15 years’ experience of work in the field of law should be sufficient;

reducing the threshold from the proposed requirement of 14 votes out of 21 to a simple majority when appointing judges.  This should reduce the risk that appointment of candidates for the post of higher court judges is blocked by non-judges;

enable the public monitoring council to take part in the procedure, with the HCJ being obliged to take their conclusions into account;

restrict the opportunity for HCJ members to refuse to initiate disciplinary proceedings in the absence of a higher-level court, especially in cases where a judge is alleged to have deliberately committed an infringement or been guilty of negligence.

Restricting the options for examination of disciplinary proceedings in closed session, and ensuring the release of separate opinions.

Remove the powers of the head of the HCJ to change the make-up of the disciplinary chamber in a non-transparent manner;

Allowing the person who supported the allegation of a disciplinary misdemeanour the right to take part in the disciplinary proceedings;

removing the requirement that a judge suspected of a crime, and of an application for his or her detention be informed.  To avoid judges going into hiding, there should also be provisions for such applications to be examined without delay;

introducing an effective mechanism for responding to judges’ complaints of interference in their work, and add a section on the use by the HCJ of methods aimed at ensuring judges’ independence.