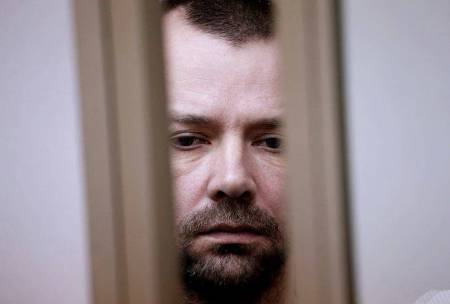 38-year-old Nuri Primov is the oldest of four Crimean Muslims now on trial in Rostov (Russia) accused of involvement in Hizb ut-Tahrir, an organisation which is legal in Ukraine, but which Russia has declared ‘terrorist’ without ever providing any grounds.  He is divorced, with one son who is 10 years old and missing his father desperately.  A graduate of the Kyiv Theatre Institute, he had previously worked as an actor, though he, Ruslan Zeitullayev and Refat Vaitov were employed on building a house when the three men were arrested in January 2015.  A fourth person Ferat Saifullayev was arrested in April that year.

He appears to have more recently become interested in Islam, and since only his mother is Crimean Tatar, it has been suspected that he was arrested to give the impression that the Russian occupation authorities were not targeting Crimean Tatars.  The next four Crimean Muslims arrested just over a year later also included Vadim Siruk, an ethnic Ukrainian and convert to Islam.

The other ironical difference is that Primov was the only Crimean Muslim of 14 currently under arrest who actually welcomed Russia’s annexation of Crimea and even took Russian citizenship.  He nonetheless remains a Ukrainian national who has doubtless lived to regret this initial support.

Like the other men now on trial, he has been illegally forced to accept a second state-appointed lawyer.  He, and the other men, deny any guilt and all four have been declared political prisoners by the authoritative Memorial Human Rights Centre.

There have been gross irregularities in this case from the outset, with the occupation authorities overtly intimidating Crimean Tatars who came to support the men at the detention hearings, and preventing the men’s chosen lawyer from defending all of them.

The prosecution’s case is based on the confused and extremely questionable testimony of a secret witness, and the open testimony of former SBU officer Alexander Kozhemyaka who appears to have used his new position in the Russian FSB to immediately seek to settle old scores with Zeitullayev and Saifullayev.

The trial is profoundly flawed, as are the charges, yet there are serious grounds for fearing that the men will all receive long sentences.  Zeitullayev is facing a life sentence, the other men 10 years.  International attention is vital.  Please circulate the brief information here: