Russia continues to torment Ukrainian it drove half-crazy through torture 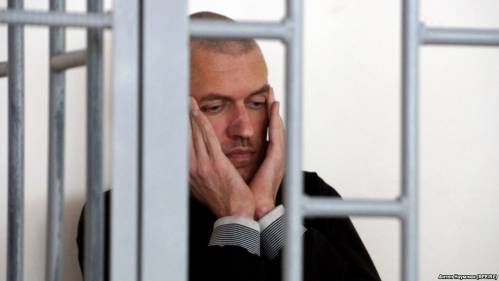 Ukraine has repeated its request for the extradition of Ukrainian political prisoners Stanislav Klykh and Mykola Karpyuk, amid increasing concern for Klykh’s psychological state after torture in Russian captivity, and as Klykh faces cynical new charges for supposed ’contempt of court’.

Russia is ignoring strong evidence of Klykh’s disturbed psychological state after being subjected to torture and filled with psychotropic drugs during 10 months held incommunicado.  It is refusing to order a proper psychiatric assessment, and has instead initiated criminal proceedings against Klykh for having allegedly ‘insulted’ a prosecutor during a court hearing.   These new charges have now been passed to a district court in Grozny, Chechnya.

Klykh’s lawyer Marina Dubrovina explained to OVD-Info that the case is based on testimony from the prosecutor as supposed aggrieved party and witnesses, as well as a linguistic assessment of Klykh’s words. The latter concludes that his words contain insults.

What was ignored is the opinion of many independent psychiatrists, such as Yury Savchenko, head of the Independent Psychiatric Association.  Although no independent psychiatric assessment has been allowed, the experts believe that Klykh’s moments of aggressions, emotional outbursts followed by periods of calm or even apathy suggest that he needs treatment.

You do not need to look far for likely reasons for Klykh’s state.  The now 42-year-old Ukrainian historian from Kyiv was seized after travelling to Russia to visit a woman friend in August 2014.  He was illegally held in Russian captivity for 10 months without any access to a lawyer, or ability to communicate with anybody.  There are medical records which substantiate Klykh’s consistent allegations that during this period he was subjected to terrible torture and that he was plied with psychotropic drugs.

Dubrovina asked for a proper psychiatric assessment of her client in November, 2015.  The report after this internal ‘examination’ stated that Klykh had been examined by a psychiatrist and neurologist, that during the examination Klykh had made no complaints and that the medical specialists had found nothing wrong.  Klykh later told her that a doctor had simply turned up, tapped a hammer on his knees, waved something around and left.

Dubrovina has recounted how on one occasion Klykh became hysterical, saying that he’d been told his father had died.  He calmed down only after Dubrovina managed to contact Klykh’s mother who confirmed that his father was fine.

In January 2016 Klykh’s behaviour became so disturbed that the court itself ordered that he undergo a psychiatric assessment.  Since there were very strong grounds for finding psychological disturbance and suspecting that psychotropic drugs had, at some stage, been used, it is likely that there was a political decision to find nothing wrong with him.  The prison personnel began forcing Klykh to take some unidentified drugs.  These were probably heavy-duty tranquilizers, but his lawyer’s attempts to ascertain their nature were fruitless.

The new charges are offensively cynical, but change very little.  If found ‘guilty’, Klykh would be fined, ordered to do compulsory work or imprisoned for up to four months.  The proceedings were initiated by the same judge Vakhit Ismailov who appeared to be working for the prosecution during the trial of Klykh and Karpyuk and who has since initiated a serious attempt at reprisals against Dubrovina and Karpyuk’s lawyer Dokka Itslayev.

Klykh and Mykola Karpyuk were sentenced in May 2016 to 20 and 22.5 years’ imprisonment, respectively, after a grossly falsified and cynical trial.

Russia claimed that Klykh and 53-year-old Karpyuk had (together with former Ukrainian Prime Minister Arseny Yatsenyuk and other prominent Ukrainian politicians) taken part in fighting in Chechnya 20 years ago and that during battles in Dec 1994 and Jan 1995 they had killed a number of Russian soldiers.   Karpyuk was accused of creating and leading a band called ‘Viking’ and Klykh of taking part in it.  The case was entirely based on their ‘confessions’ extracted during the 18 months that Karpyuk was held totally incommunicado and without proper lawyers, and 10 months in Klykh’s case.  This was backed by provably wrong testimony provided by a Ukrainian national Oleksandr Malofeyev already serving a 23-year sentence and directly dependent on the Russian prison authorities for life-saving medication.

It was on the basis of this devastating assessment of the charges that in February 2016 Memorial declared both men political prisoners.  It called the trial part of the unrelenting anti-Ukrainian campaign in the Russian state media and pronouncements from high-ranking Russian officials (see, for example, The Chilling side to Russia’s claims about Yatsenyuk as Chechnya fighter)

In its analysis, Memorial HRC demonstrated that the indictment contained fictitious crimes, and of the 30 Russian soldiers who really had died, 18 were killed in another place altogether, and a further eleven were not killed by gunfire, as the prosecution claimed.  The list of factual mistakes is enormous, as is the amount of evidence that Klykh and Karpyuk had never set foot in Chechnya.  It was all ignored.

Klykh himself has addressed a plea to Ukraine’s government to speed up negotiations on securing the release (exchange) of all Ukrainians held illegally in Russian prisons.  He asks also for help from the Ukrainian consulate in getting a television and is clearly facing an information vacuum.  The letter was made public by Serhiy Petukhov from Ukraine’s Justice Ministry who writes that an information vacuum is one of the weapons used to put pressure on Ukrainians held in Russia.  This makes the need for letters particularly acute.

Please write to Stanislav Klykh and to Mykola Karpyuk -  even a single sentence or two will send an important message both to them, and to the Russian authorities, that they are not forgotten. 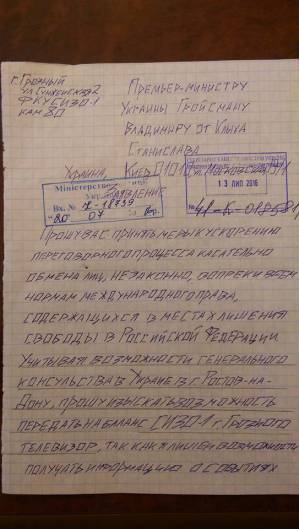