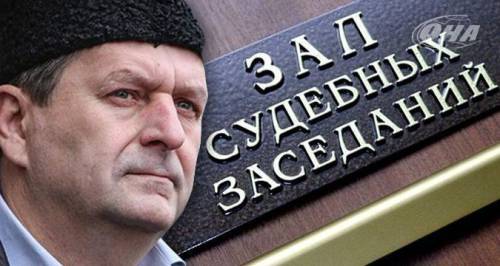 The court currently preventing Crimean Tatar leader Akhtem Chiygoz from attending his own ‘trial’ has now refused to allow prominent Crimean Tatar rights lawyer Emil Kurbedinov to defend him.  Nikolai Polozov, a Russian lawyer who is also representing Chiygoz, what he is seeing in Crimea “total lawlessness”.

This was to be expected.  Chiygoz and two other Crimean Tatars – Ali Asanov and Mustafa Degermendzhy – have been in detention now for well over a year on absurd charges regarding a pre-annexation demonstration over which Russia has no jurisdiction.  Any court proceedings are illegitimate since the trial itself is directly in breach of Russia’s Criminal Code, which prohibits prosecution for something that happened in another country.

Without any legitimate grounds, the court under Russian occupation has refused to let Chiygoz be present in person, with the proceedings and Chiygoz’s rights seriously hampered by the use of video link and the inability to consult directly with his lawyers.

No reason appears to have been given for preventing Kurbedinov from representing Chiygoz.

Polozov reports that the court also refused to allow Chiygoz to make applications, being in a hurry, he says, to question the so-called ‘victims’ in the trial.

Polozov had earlier stated that the indictment read out during the first hearing on August 2 was 99% made up of a list of the alleged ‘victims’ and their supposed injuries.

The charges pertain to a huge demonstration on Feb 26, 2014, the day before Russian soldiers seized control and three weeks before Russia ‘formalized’ its illegal annexation of Crimea.

There were around 10 thousand Crimean Tatars and other Ukrainians concerned that an attempt was planned to carry out an effective parliamentary coup.  They were opposed outside the parliamentary building by a smaller crowd of pro-Russian demonstrators led by Sergei Aksyonov.  He was at the time one of a tiny number of MPs from the marginal Russian Unity party, however it was he who installed himself as leader after a parliamentary ‘session’ overseen by Russian soldiers with machine guns.  There are grounds for believing that the pro-Ukrainian demonstration that day stopped Russia from achieving an effective coup without the use of Russian soldiers.

There were two deaths that day, but both were in the area where pro-Russian demonstrators were gathered and one died of a heart attack.  With respect to the death of Valentina Korneva, her husband has specifically  that he does not think the men on trial had anything to do with it, and that it was probably paid thugs brought to the demonstration in two coaches by the pro-Russian side.

It is no accident, therefore, that the indictment simply lists ‘victims’ with the charges against all the men blurred and unclear.  During the hearing on August 2, Chiygoz both denied any guilt and pointed to the vague nature of the actual charges.  The same applies to 5 other men, including Asanov and Degermendzhy, whose trial was unwarrantedly separated out to try to dissipate attention to these politically motivated trials.

All video footage available is essentially in the defendants’ favour.  It shows Chiygoz actively defusing conflict situations and Degermendzhy trying to get his asthmatic father who was in physical distress out of the crowd

The Russian Memorial Human Rights Centre issued a  on Feb 15, 2016 declaring Chiygoz, Asanov and Degermendzhy political prisoners.  It pointed to the clear lack of jurisdiction and dismissed the formal excuse presented that two of the alleged ‘victims’ are Russian nationals.  Neither had sought medical treatment at the time, and Memorial noted that both in their cases, as in those of over half the alleged ‘victims’, there were serious doubts as to the authenticity of any injuries.  They pointed out also that the fact that only Crimean Tatars had been targeted was an indication of the political motives behind the prosecution.

With respect to these ‘victims’, Novaya Gazeta  in late February 2015, a month after Chiygoz’s arrest, that the Russian Investigative Committee had been short of ‘victims’ and witnesses, and on February 2, 4 days after Chiygoz’s arrest and 11 months after the events, had invited Simferopol residents to come forward “even in the absence of bodily injuries”.

This then is the testimony on which one of Russia’s most openly lawless trials in occupied Crimea is based on.