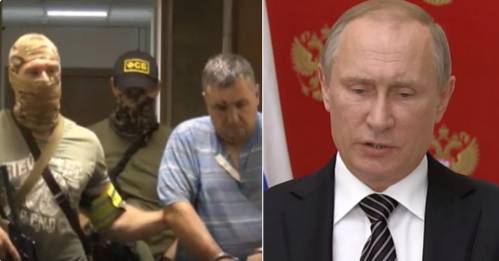 If Russia wanted to make its claims of an attempted Ukrainian terrorist attack on Russian-invaded and occupied Crimea credible, it should not have blocked the last remaining independent Internet sites days before the alleged attack.  Bringing in massive amounts of military hardware prior to the supposed event also seriously lowers plausibility.

After days of speculation about Russia’s movement of huge amounts of military technology, closure of the three crossings between Crimea and mainland Ukraine and its armed checkpoints, the FSB asserted on August 10 that Ukraine’s military intelligence had sent ‘saboteurs’ into Crimea, supposedly in order to attack critical elements of infrastructure and to destabilize the socio-political situation in “the region”.

The FSB claimed that a group of saboteurs had been discovered during the night from 6 to 7 August near the city of Armyansk.  An FSB officer had allegedly been killed while trying to detain them, and 20 homemade explosive devices had been discovered, as well as other ammunition, grenades, etc.  The stockpile supposedly contained special weapons belonging to the Ukrainian Armed Forces.

The FSB assert that they ‘liquidated’ a Ukrainian military intelligence network and have detained an unidentified number of Ukrainian and Russian nationals, all of whom have supposedly ‘confessed’.   Given the delay in reporting this and previous FSB allegations, it is surely significant that only one person detained is actually named and shown.

Yevhen Panov is, according to the FSB’s rendition, an employee of Ukrainian military intelligence.  Ukraine, which has angrily rejected all these allegations says that Panov served in the armed forces for two years and had refused after that to continue on a contract basis.  His brother, Ihor, said on Wednesday evening that they believe Yevhen was abducted from the Zaporizhya oblast.  He was visiting friends at a dacha, and last spoke with his wife on the evening of August 6.   They became alarmed after he failed to phone on Sunday, but only learned what had happened to him from the media.  Ihor Panov is adamant that his brother had no connection with the military and no interest in Crimea at all.  He works as a driver and electrical mechanic at the Zaporizhya Nuclear Power Plant, and volunteers for the Enerhodar Self-Defence.  He and his wife are planning to start a family and his brother says that it is inconceivable that he could have gone to Crimea on his own free will.

The FSB goes on to claim that Ukrainian spetsnaz units during the night from 7-8 August made two more attempts to get what the FSB terms ‘sabotage and terrorist groups’ into Crimea, with this accompanied by shelling from mainland Ukraine.  A Russian soldier was supposedly killed.

As reported earlier, a new crackdown on the main independent Internet sites covering Crimea had begun on August 1.  It was interesting and rather unexpected that the de facto prosecutor Natalya Poklonskaya effectively claimed to the government controlled RIA Novosti that this had been her own initiative.

The Crimean Human Rights Group had reported a large influx of military hardware on Aug 6.  The photos and video indicate a build-up that could in no way have been a response to a gunfight in Armyansk the previous night.  The movement of military equipment was nowhere publicly announced or admitted.  The closure of the crossings between mainland Ukraine and Crimea began at around 7 a.m. on August 7.  This, according to the FSB would have followed the first incident, but not the second, which they claim involved shelling from Ukraine.  It also followed the documented sightings of Russian military technology.

Russia’s behaviour in closing the administrative border crossings and in bringing in so much hardware caused anxiety in Ukraine that a new attack much be planned.  Such concerns were largely dismissed by the Ukrainian military who believed that Russia was planning military exercises in occupied Crimea as part of the so-called Caucasus 2016 exercises.

There is plenty of video and photographic evidence of Russian military equipment, not so of the alleged attacks.  Some kind of shooting incident on Aug 7 does seem likely given the number of different reports, from Alexander Talipov, for example, and from pro-Russian militant supporters, including Igor Girkin, the former Russian military intelligence officer who played a major role in Russia’s invasion of Crimea and Eastern Ukraine, and, in more detail, from Tanai Cholkhanov.  There does not appear to be any from the supposed shelling the following day.

There is one Ukrainian who has been arrested and is now providing the testimony required.  Confidence in such testimony is strained given clear proof which Russia was forced to acknowledge that Ukrainian political prisoner Serhiy Lytvynov ‘confessed’ to heinous war crimes with entirely fictitious victims under torture.  There are equally good grounds for believing that the ‘confessions’ used to convict four Crimeans, including filmmaker Oleg Sentsov, were obtained through torture.

There are no other suspected ‘saboteurs’ nor is there any information about the numbers arrested, or their alleged Russian casualties.

None of this stopped Russian President Vladimir Putin from claiming that Ukraine “had turned to practising terror, rather than seeking compromise” and a peaceful settlement.  He even threatened “revenge” for the alleged 2 Russian fatalities. It was Ukraine’s leaders who had "seized power" in Kyiv, not Russia which had invaded a part of Ukraine in February 2014.

While fears are high in Ukraine that the Kremlin is looking for an excuse for a mounted attack on Ukraine, this one, even with the pitiful reporting from many western information agencies, looks bad.

It is, nonetheless, frustrating that the grotesque absurdity of Russia’s claims was so seldom addressed.  Russia invaded and occupied Crimea two and a half years ago.   ‘The BBC and Deutsche Welle, both of which are public media, would be well advised to consider the adequacy of their presentation of the events in 2014 and the so-called ‘referendum’, especially when an occupier now shouts about an attempted “incursion”.   Both DW and the BBC, for example, described the annexation as occurring after a ‘referendum’.  That even was organized in 10 days after Russian soldiers seized control and at the point of machine guns.  Even then and with only ‘observers’ from far-right pro-Putin parties, the results are likely to have not been in favour of annexation.

The suspicion has arisen that the whole story was either inflated or totally invented in order to give Putin an excuse to completely back away from the Minsk Agreement which Russia has shown no sign of intending to comply with.  He specifically spoke of there being no point in holding the so-called Normandy Four talks between Russia, Ukraine, France and Germany during the G20 summit in early September.

If he hoped to abandon Minsk while claiming Ukraine to be at fault, he could have tried for a more convincing story.