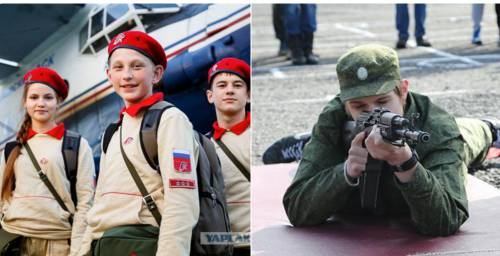 Photos from here and from the Russian Defence Ministry site

The apparent resurrection of a long buried Soviet tradition in Russia’s new Youth Army is not the most alarming feature of a children’s ‘military-patriotic’ formation which in just eight months has opened 76 regional branches and reportedly already has 12 thousand members.  Yunarmia [the Youth Army], which enlists children as young as 11, promising to teach them “to shoot from anything, except rockets”, is openly working in close cooperation with Russia’s Defence Ministry.  This kind of direct relationship was not seen even in Soviet times.

There was no public discussion about the formation of such an ‘army’ which was first mentioned back in January 2016. The media noticed it in May after an official gathering of members from all over the country with the participation of the Defence Minister Sergei Shoigu and leadership of his ministry. He was presented with a woollen tank and announced plans to open hundreds of training centres throughout the country.

It is easy to understand the attraction for young people of such a formation.  Shoigu promised them vivid experiences, plane journeys, parachute jumping and going on military submarines.  They would be able to shoot from anything except rockets, and travel on all forms of transport.  What child or teenager would say no, especially when they come from the provinces where there is nothing to do or hope for?

Yunarmia was officially registered at the beginning of August with Shoigu attending the formal ceremony, handing over the keys of ‘headquarters’ in Moscow, and referring to the formation as “our army”.

The Defence Ministry describes the Youth Army as having emerged “at the initiative” of Shoigu and as being “supported by” Russia’s President Vladimir Putin.  Its main activities will be “military – sport games and competitions on military – applied forms of sport; Memory vigils and visits to places of military glory; posts at monuments, obelisks and the Eternal Flame”.

In fact, this ‘initiative’ looks for all the world like a Defence Ministry structure, with the children learning very specific military skills.  Roman Popkov, writing for Open Russia, reports that the planned training will go much further than learning to put together and dismantle automatic rifles as they did during preliminary military training in Soviet times.  The Young Army members will undergo a course in drill and gunfire training, as well as basic military tactics.

Popkov notes that claims that only airguns will be used appears to be contradicted by the Defence Minister’s promises quoted above.

Although the direct link with the Kremlin is glossed over with words like ‘supported’, it seems likely that this ‘army’ was always planned as part of the ‘Russian Movement of School Students’, created by presidential decree on October 2015.

The new movement was, according to Putin, being created “to enhance state policy on bringing up the growing generation and facilitate their personal development on the basis of the system of values inherent to Russian society”.  According to Nikolai Pankov, Deputy Defence Minister and the person seemingly in charge of the Youth Army, the Youth Army “will be responsible for issues linked with the military-patriotic upbringing of young people” within this movement.

The Youth Army may be a unit of this Russian Movement of School Students, however it is clearly the Defence Ministry which is actively creating and directing it.

Popkov notes the extraordinary speed with which this Youth Army is being created, although the website is mainly devoted to advertising the Young Army’s uniform. The cost of this uniform would be well out of reach for many families, however cadets and members of central sports clubs would be issued them free of charge.

There is considerable propaganda about this formation and an enormous drive for numbers, so how ‘voluntary’ the membership is may also prove to be in question.

What is in no doubt is the level at which this new ‘patriotic’ organization is being pushed.  Popkov points out that the earlier pro-Putin movements like ‘Nashi’ were political PR organizations, without any open acknowledgement of links with the Kremlin.

A Youth Army, connected with a movement aimed at promoting certain supposedly Russian ‘values’ has now been formed and is being intensively pushed by Russia’s Defence Ministry. Generals are openly admitting that they want to teach kids to fight from an early age.  The enforcement bodies, Popkov believes, are demonstrating that the new ‘movement’ is a part of the state and is here for a long time.

All of this is quite different from, say the Soviet Pioneers, and much more reminiscent of the Nazi Hitler Jugend, both in the ideological component and in the concentration on militarism.

As well as military skills from age 11, members of this ‘army’ will also be learning a very specific form of patriotism.   ‘Victory’ is one of the regular ‘military sport games’ which have emerged in recent years.  They were ostentatiously held in Russian-occupied Crimea in August 2015, with teenagers aged 14-16 competing at shooting, as well as dismantling and putting together Kalashnikov rifles.  The event was, allegedly,  aimed at ensuring a “solid basis of patriotic awareness” and an “understanding of Russia’s strength and resilience”.

The camps were first started in Russia in 2014, with their aim being quite openly to prevent young people turning to political protest.  Denis Sadovnikov from the Russian Military History Society was quoted as suggesting that the children should find a ‘positive role’ model in Igor Girkin (nom de guerre Strelkov). The latter has been identified by US officials as working for Russia’s GRU military intelligence service and played an active role both in Russia’s invasion of Crimea and in the military conflict in Donbas.  At that time Sadovnikov was offering him as an example to Russian youth,

The students were also tested on their knowledge of ‘Russian history’, which undoubtedly provided a highly distorted picture of Crimean history and recent events.

The same is, unfortunately, true of the history of the Second World War, and of the role of bloody Soviet dictator Joseph Stalin.  On Sept. 1, 2016 the Russian Supreme Court rejected an appeal lodged by Perm blogger Vladimir Luzgin.  He had been fined 200 thousand roubles under the new law on ‘rehabilitation of Nazism’ for reposting a text which stated, quite correctly, that the Soviet Union had, in collaboration with Nazi Germany, invaded Poland in 1939. The Second World War, with numerous distortions of historic fact, is also increasingly used as a way of effectively whitewashing Joseph Stalin.  One of those actively involved in such ‘rehabilitation’ of the murderous dictator, is Olga Vasilyeva, recently appointed Russian Education Minister.