Green Light for Corrupt Politicians slipped into 2016 BudgetRigged and Secretive Fight against Corruption?Government accused of rigging anti-corruption selection commissionHead of Traffic Police Dismissed after Scandalous Lifestyle ExposedIt’s Tax Time In Ukraine, And Financial Discrepancies Suggest Corruption EnduresBehind the declarations: how public officials lived – and live nowParliamentarians’ secrecy regarding income given judicial OKVerkhovna Rada and Constitutional Court least willing to divulge public informationCourt rejects Verkhovna Rada claim that staffing details are not for the publicOPORA takes secretive Verkhovna Rada Office to courtCHESNO: Office of the Verkhovna Rada flagrantly violating Public Information ActUkrainska Pravda takes parliament to court over concealed informationResidences of Azarov, Lytvyn and Yushchenko to cost the taxpayer 50 million UAHCourt has no problem with parliament not handing over MP’s declarationsVerkhovna Rada Office refuses to hand over Deputies’ declarationsPublic Information Law like a Bolt from the Blue for the AuthoritiesCVU: Ukrainian authorities not ready to be openFirst legal proceedings over alleged infringement of Public Information LawStop Censorship will force Deputies to make their income declarations publicThe Public are most interested in how public funding is spent
• Topics / Social and economic rights 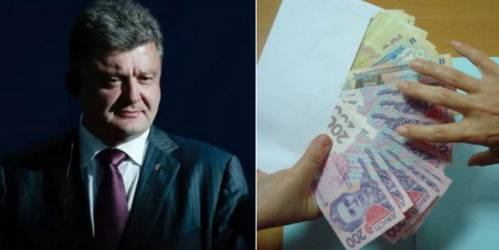 Transparency International in Ukraine and other NGOs have condemned what they see as deliberate sabotage of the electronic income declaration system, and two prominent newspapers have called on the West to refuse both financial aid and visa-free travel until Ukraine’s leaders stop trying to con the country’s citizens.

There are situations where half a reform is better than none.  This was not one of them, and civic activists are outraged at what they call sabotage of a vital reform.

Ukraine’s politicians have a long track record of hampering real anti-corruption measures.  Income and assets declarations have long been required, but there was no liability for concealment or downright lies.  In January 2016, when the system for electronic declarations had been agreed, a norm ‘mysteriously’ appeared in the 2016 Budget allowing deferment of such declarations until 2017.  The scandal then meant that measures were taken to rectify the situation and the system was set to be launched on August 15, 2016.

The National Agency for Preventing Corruption was on schedule, however there was no certification from the State Department for Communications.  Since the lack of such certification means that there will be no mechanism for punishing public officials who lie or conceal information, the system should not have been launched.

Civic activists are scathing about the situation.  Transparency International in Ukraine [TI] has called for the dismissal of Leonid Yevdochenko, head of the State Department for Communications and Natalya Korchak who heads the National Agency for Preventing Corruption.  It accuses them of having “through their actions, turned one of the main instruments of anti-corruption reform into a fiction.”

Yaroslav Yurchyshyn, TI Executive Director, says that both bodies bear direct responsibility since they have actively sabotaged the process for receiving the certification.

The certification itself is about protection of information.  Since personal data must be input together with the declarations, any attempts to process such data will be impossible.  According to Ukraine’s legislation, a court would not be able to use information as proof if it was not properly obtained in accordance with data protection legislation.

The management of the two bodies involved, Yurchyshyn explains, have now enabled officials to continue lying with impunity.

Yurchyshyn’s frustration was echoed by many speakers at a press conference on Monday.  Vitaly Shabunin, from the Anti-Corruption Action Centre, pointed out that officials were now being given an opportunity to secrete away assets obtained since Euromaidan.  He warned that the EU was likely to react by refusing to remove visa requirements.

The editorial staff of Yevropeiska [European] Pravda and its authoritative umbrella publication Ukrainska Pravda have gone even further in a joint statement on Monday evening.  They suggest that the West should refuse to provide Ukraine’s President Petro Poroshenko with financial aid or visa liberalization without radical change.

The authors stress that they have always promoted the removal of visas for Ukrainians travelling to the EU, and that on previous occasions when the government was drowning in corruption scandals, they called on European politicians to not give up on Ukraine.  The country’s ‘European choice’ was real and visa liberalization would help the country to fulfil its commitments, they had argued.

As far as IMF loans are concerned, the journalists suggest that their advice to the IMF is probably redundant since the international body would be unlikely to provide money after what they see as a rapid turnaround on fighting corruption in the last week.

So why only now?

Up till now, the authors say, the main instruments for countering reform used by Ukraine’s leaders and the main political groups have been delay tactics and imitation of reform.  There were some attempts at faking reforms – pushing through corruption-generation draft bills under the guise of pro-European reforms.  These, they say, were normally at the level of petty lobbyists and could be knocked down.   Such methods had been used under the regime of Viktor Yanukovych, and there was reluctance to perpetuate those ways in post-Maidan Ukraine.

That changed, they believe, at the weekend and there are now grounds to assert that the country’s leadership have become involved in reform-rigging.

They are convinced that the “State Communications Department’s special operation on deliberately sabotaging the certification system was approved at a high level”.  It is just as obvious, they add, that pressure from above was put on the head of the National Agency for Preventing Corruption.  She changed her line several times during those days, they point out.

At the weekend, the journalists note, allegations had been made about people around Oleksandr Turchynov, head of the National Defence and Security Council, but Poroshenko’s role was seen as unclear.  His administration had, after all, come out against launching the system without certification.

They now point to “ever more signs that if he didn’t himself initiate this, the President did at least support the reform rigging”.

Propagandists from the President’s Administration, for example, had launched a campaign to push the idea that the system was working and that the events of the last few days were a “victory”.  They also individually contacted journalists, pushing this line.  The authors note also that the member of the National Agency from the information ‘presidential quota’ [Ruslan Radetsky] had gone from being against the fake ‘launch’ on Saturday to effective support on Sunday.

“The key problem here is that the country’s leaders believe in their ability to con their own people, and the West”.

In fact, of course, the launching of a fake was viewed within the EU with distrust, and was a PR disaster for Poroshenko and the entire government, the journalists believe, both within Ukraine and in the West.

Why he did this can only be speculated upon. The authors instead concentrate, as have civic activists, on the possibilities for salvaging the situation.

The President should, they say, recognize that the situation with the electronic declarations is critical and take it under his personal control and responsibility.  He, the government and the National Agency for Preventing Corruption should work together and find a method of stopping the system which can only be a front without proper certification.  Such a way out should not be difficult to find since the launch without certification was in direct breach of Ukrainian legislation.

An official investigation must be held with those responsible punished.  Like Transparency International in Ukraine, they believe that Korchak and Yevdochenko should both be dismissed.  In Korchak’s case she should be replaced as head, but not removed from the Agency since that would then mean that there was no quorum.

The parties involved must draw up a step-by-step plan for resolving this situation with clear timeframes.  This would make it possible to restore Western confidence, reinstate the possibility of visa liberalization and remove the risk to EU and IMF funding.

This is not the first time that civic activists and the media have criticized the country’s post-Maidan leaders, but it is surely the strongest.  They warn that if the government cannot find a solution and if the EU really does block visa liberalization and funding, Ukraine’s leaders should not try to blame civil society and the media.  It was the regime’s pillaging of the country that led to Maidan, not “unpatriotic criticism” of that regime.  If Ukraine’s leaders remain deaf to these calls, they will be repeating those tragic mistakes.

“Replacing reforms with ersatz imitation, or worse, their fakes, merely pushes the country still further into crisis and steals our future.”