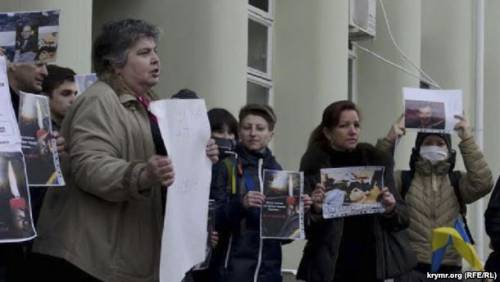 Human rights activists are warning Ukrainians to think long and hard before visiting Crimea right now.  The warnings were prompted by Russia’s recent attempts to present Ukraine as attempting ’incursions’ and ’acts of sabotage’ against its own territory which Russia is occupying, and arrest and likely torture of Yevhen Panov, Ridvan Suleimanov and Andriy Zakhtei, There are many other grounds, however, as one Ukrainian activist has learned to her cost. Larisa Kitaiska has been prohibited from leaving Crimea and formally charged over posts made on Facebook which are claimed to be ‘Russophobic’.

Kitaiska was informed of the charges on August 12 after formal interrogation during which she was shown numerous screen shots, supposedly from her Facebook page.

This followed notification of the case on the prosecutor’s office website which makes it clear in the title that Kitaiska is accused of “spreading Russophobic ideas”.

The prosecutor’s office in Yalta has supposedly verified and confirmed that it is legitimate to bring charges against her for posting “material of an extremist nature”.

It is asserted that the information posted “was aimed at inciting hatred and enmity to a group united by nationality”.  She is accordingly charged under Article 282 § 1 of the Russian criminal code (publicly inciting enmity on ethnic grounds).   This could get a sentence of up to 5 years’ imprisonment.

52-year-old Kitaiska told the Crimean Human Rights Group that the psychological pressure from the FSB, which she likens to torture has led to a deterioration in her health and her husband’s.  He was able to leave Crimea and is currently receiving treatment in a Crimean hospital.  She, however, has been forced to sign an undertaking not to leave the peninsula.

As reported, in early July Kitaiska and her husband returned to Yalta to sort out some problems to do with their flat.  The FSB arrived a few days later and took her away for questioning.  They returned with her and carried out a search of the flat.  She believes that the prosecution may in fact be an attempt to try to get their flat.

Kitaiska is a businesswoman and former Maidan activist who never concealed her opposition to Russia’s invasion of her home.  Whether or not there are venal motives in this case, the trial alone of Andriy Kolomiyets has highlighted the dangers that effectively any Ukrainian can face.  Kolomiyets was recently sentenced to 10 years’ imprisonment with the main charge being on implausible claims linked with Euromaidan over which a court under Russian occupation can have no jurisdiction.

Kitaiska’s initial visitation from the FSB coincided with the publication by the Crimean Human Rights Group of advice to Ukrainians visiting Crimea.

This document specifically warned that the FSB closely follows social networks, and that even reposts can be dangerous.

The activists noted that Russia’s ‘anti-extremist’ and ‘counter-terrorist’ legislation was dangerously vague, applied selectively and for political reasons. For that reason, it was impossible to hope for any fair judicial assessment in Crimea at present.

They advised then to suspend all social network accounts since these are closely followed, with any criticism of the Russian authorities, any publications expressing a pro-Ukrainian position, photos from Maidan, or with Ukrainian soldiers, etc. potentially qualified by the Russian FSB as ‘extremist’ or ‘terrorist’. The FSB will also pay attention to who your friends are on social networks.

Advice was given on cyber security if you are unable to suspend your account.  The activists repeat advice given by Ukraine’s Security Service, warning Ukrainians to steer clear of VKontakte and a few other networks which are closely monitored by the FSB.  They should be aware that even material which has been deleted on VKontakte will remain accessible to the Russian security service, including private messages and chats.

All of this is very Soviet, but none more chillingly so than the warning that the people you speak with in Crimea could write a denunciation to the FSB against you, with this positively encouraged now by the occupation authorities.