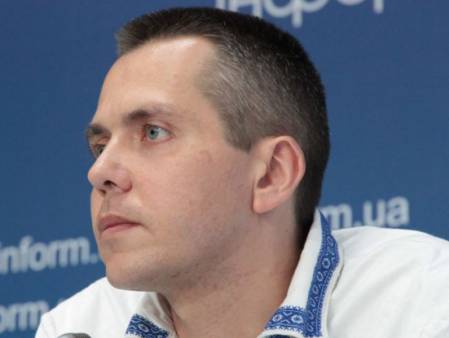 Update:  In reporting Yury Ilchenko’s successful escape from Crimean imprisonment on Thursday, the questions that came to mind were hinted at, but no more.  The Soviet echoes in this case, however, became deafening within hours of Ilchenko’s press conference, with claims from the Sevastopol branch of Russia’s Investigative Committee that Ilchenko was in fact charged over alleged sexual offences against an 11-year-old child.  Whether this was planned all along and explains the unprecedented decision in Russian-occupied Crimea to release Ilchenko under house arrest remains unclear.  Please see below for earlier reported information about the allegations which aroused doubts from the outset.

One of the ever-increasing number of Russia’s political prisoners in occupied Crimea has managed to escape. After nearly a year spent in detention on ‘extremism’ charges, Yury Ilchenko, Sevastopol teacher and blogger, was released under house arrest.  Expecting no justice from a court in Russian-occupied Crimea, Ilchenko decided to flee to mainland Ukraine.

His story is eerily Soviet.  Not all details of his escape have been revealed for obvious reasons, and the flight has only become public now, after his parents were also brought to safety. The family, which Ilchenko says, was the first to openly reject Russian citizenship after Russia’s invasion, are now together in Lviv.  Certaub questions remain unanswered, but then that is also a chilling echo from Soviet times, when the Security Services positively tried to instil distrust.

37-year-old Ilchenko ran a language school in Sevastopol, and also wrote blogs and poetry.  He was entirely open in his opposition to Russia’s invasion and annexation of Crimea.  At the press conference on Wednesday, he explained that he had been accused of “anti-Russian posts”.  If by anti-Russian, they mean anti-occupiers, then that’s right, he says.  He openly opposed Russian occupation and he encouraged others to reject Russian citizenship.

As reported, the FSB and so-called ‘Centre for Countering Extremism’ appeared at his home on July 2, 2015.  A search was carried out, with all technology removed and all kinds of material that had nothing to do with his views.

He was initially charged over a post on the Internet in which he called for a total blockade of Crimea under occupation and called for traitors to be held to answer.  He also expressed the view that Ukraine should be more active with respect to Crimea.  This was considered to fall under Article 282 of Russia’s criminal code – ‘incitement to hatred and enmity’.  Around a month later, the FSB added charges over a repost of a text by Dmytro Yarosh, at the time still head of the ultranationalist Right Sector.  In that text, which Ilchenko had posted ‘for discussion’, Yarosh had suggested that Ukraine should react to Russia’s gas blockade of Ukraine by blocking Russia’s transit pipes to Europe through Ukraine.  This was deemed to constitute ‘public calls to extremism’ under Article 280.

Ilchenko was remanded in custody and was held in the SIZO for 11 months.  He says that another prisoner made it clear that he’d been offered a lighter sentence for persuading Ilchenko to accept Russian citizenship and to sign all kinds of ‘confessions’.  In general, they tried to keep him away from other political prisoners, though he told Ukrainska Pravda that he was able to spend some time in the same cell as Rustem Vaitov, and also spoke with Arsen Dzhepparov.  Both are facing grotesque ‘terrorism’ charges.  Vaitov and three other men are now on trial in Rostov and have already been recognized as political prisoners by the renowned Memorial Human Rights Centre.

Ilchenko mentions that he saw imprisoned Crimean Tatar leader Akhtem Chiygoz only once and only long enough to shake his head.  He calls that an honour and says that he prays that he will one day be able to shake his hand when they are both free men.

Ilchenko rejected all attempts to force him to sign ‘confessions’ despite threats that he could spend a decade or more in a Magadan prison and torture.  The beating was done so that it didn’t leave obvious scars, and other methods were also applied.  He recounts how they used deprivation of sleep, then beating him for ‘pretending’ when he lost consciousness after four days.  The family was also clearly put under pressure.  In October 2015, his father Hennady Ilchenko, who had initially spoken with Radio Svoboda’s Krym.Realii, suddenly changed and refused to speak with journalists. He explained then that he didn’t want his son to get a worse sentence.

There were many appeals through those 11 months and applications against his continued detention.  Ilchenko says that he was surprised himself when, on June 2, 2016 the court agreed to release him under house arrest.  He was to be confined to his home with an electronic bracelet.

According to the account now given, Ilchenko managed to cut through the electronic bracelet and then fled, initially through the forest, and then managing to hitchhike to the Armyansk crossing into mainland Ukraine where he climbed over the fence.   He had hoped to see only Ukrainians from that point, but a Russian soldier came up and asked to see his passport.  He says he panicked and began running to the Ukrainian crossing.  Thankfully the soldier only ran after him and didn’t shoot, and he was able to reach the Ukrainian guards to whom he explained who he was.  He reached Lviv two months ago.  That period was spent with volunteers from the Crimea SOS office who provided him with support.  Yury’s mother is suffering from Alzheimer’s, and nothing at all was made public until she and her husband were able to join their son.

Yury Ilchenko is now free.  The arrests and politically motivated prosecutions in Crimea are, however, only increasing.   Please remember and show solidarity with all of those who remain in Russian captivity, either in Russia or in Crimea under occupation.  As well as addresses to write too, there are also details about the prosecutions here:

A video which Ilchenko has dismissed as a fake was posted by a fairly questionable source soon after Ilchenko’s press conference.  Since Ilchenko spoke only of political charges, nothing else was mentioned here.  The links given to earlier reports, however, do make it clear that the charges appeared early on and were viewed with immense scepticism.

In August 2015, a Ukrainian marathon swimmer from Sevastopol Oleg Sofyanik announced that he had decided to stay in mainland Ukraine after being summoned for questioning about his friend Yury Ilchenko.  Sofyanik, who like Ilchenko, opposed Russia’s invasion and occupation of Crimea, explained to Novoye Vremya that he had received a call at the end of July that FSB officers had appeared at his flat in Sevastopol several times, forced their way in, carried out a search and left a note from Mikhail Novoseltsev, head of the ‘Centre for Countering Extremism’ in Sevastopol.  Sofyanik called him and asserts that Novoseltsev said the following:

“We came to you because of the arrest of your friend Yury Ilchenko, the Sevastopol blogger. He was arrested on July 2 for posts on [the social network] VKontakte. He wrote anti-Putin statements and articles.  He has been in the Simferopol SIZO since July 2.”   According to Sofyanik, Novoseltsev effectively confirmed that he could face arrest, and unsurprisingly Sofyanik decided not to go back.

Sofyanik asserted that Ilchenko had also received several visitations from Novoseltsev during the winter.  He was interrogated many times and forced to delete material from VKontakte and Facebook.