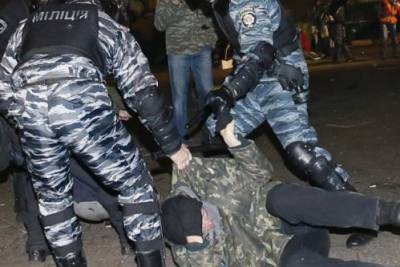 President Petro Poroshenko has used his power of veto against a draft bill which in its present form could have removed liability for crimes against Maidan activists, looters and other serious offences.  The law was adopted in July and slated by human rights activists for the potential impunity it envisaged for real crimes if committed by people who had fought in the military conflict (known as the ‘Anti-Terrorist Operation’ or ATO).

The 2016 amnesty law (No. 4255) was supported by 247 MPs on July 7, with this a comfortable, though not overwhelming majority.  Only one aspect of the bill was controversial, namely the fact that the amnesty was extended to “participants in military action who in defending Ukraine’s independence, sovereignty and territorial integrity had taken part directly in ATO”

The bill specifically excluded those convicted of grave and especially grave crimes, as well as corruption-related offences committed by people using their official position.

There were undoubtedly problems at the very beginning of the military conflict.  Ukraine’s military capacity had been gravely eroded during Victor Yanukovych’s presidency, and for the first few months in early 2014 it was newly formed volunteer battalions who fought against heavily armed Russian and pro-Russian fighters.  Since that time, some members of the battalions have faced prosecution on charges which in no way recognize that the actions were committed during a time of military conflict.  Seizure of property during the fighting has, for example, been qualified as ‘armed robbery’, regardless of the circumstances.  Such prosecutions have been criticized, among others, by Yevhen Zakharov, Director of the Kharkiv Human Rights Group, who believes that you cannot always assess actions committed in wartime, using peacetime categories.

The problem, however, is that this draft bill envisaged an amnesty that was much too broad.  No amnesty should cover looting, nor can it justify waiving liability for crimes not committed during the conflict.  In its present version, the bill would mean that any former enforcement officer who took part in ATO could no longer be charged with crimes against peaceful protesters during Euromaidan.

The amnesty question is extremely fraught in Ukraine, especially because of the requirement to introduce an amnesty law in the Minsk Agreement.  One of the points of that agreement is to “provide pardon and amnesty by way of enacting a law that forbids persecution and punishment of persons in relation to events that took place in particular departments of Donetsk and Luhansk Oblasts of Ukraine.”

The heated debate in Ukraine is chiefly over who would be amnestied, with it often forgotten that liability for war crimes and crimes against humanity cannot be waived.

Instead of passing faulty laws, Ukraine’s parliamentarians could profitably address the lack of any such categories in Ukraine’s criminal code.

It is known only that the President has tabled his proposals for changes to the bill, not what these are.

The move is certainly welcome.  Although the scale of crimes committed by Kremlin-backed militants in Donbas is incomparably greater than those committed by ATO fighters, as is the level of impunity, any attempt to extend a near blanket amnesty would be a very dangerous precedent.