Mark it down, Mr Trump, Russia has already gone into UkraineNo surprises as Trump says he could recognize Crimea as ’Russian’ & lift sanctionsA British Foreign Secretary who excuses Russia’s invasion of Crimea?Kremlin’s Donbas proxies congratulate UK for ’doing what they did’ & voting for BrexitBrexit a gift to Putin, the far right & Trump, a blow to democracyEx-Mayor of London Boris Johnson blames Russia’s annexation of Crimea on the EUWhat European Values if Dutch Referendum Result Stands?Appeal by the leaders of Ukrainian national communities to the Dutch populationFormer Soviet political prisoners call on Holland to say yes to Ukraine’s European futurePlaying with fear and ignoranceHow a democratic tool became a threat to democracyUkrainian Jewish leaders appeal to Holland: Give our country the chance to break with the pastDutch referendum puts Ukraine in spotlightNo ‘G8’ until Russia ends its occupation of Crimea & frees all Ukrainian hostagesRussia forced to withdraw trumped-up charge against Crimean Tatar activistWith Trump on his side, Putin admits Russia staged the ‘referendum’ to annex CrimeaIf Putin admitted Crimea is Ukraine, why would Trump recognize illegal Russian annexation?Ukraine lawmaker calls on USA to investigate new ‘evidence’ of secret payments to ManafortUkraine as testing ground for Kremlin-Trump ’dialogue’Avdiivka Offensive Aimed at Kremlin ‘Dialogue’ with Trump & Undermining Minsk Agreement
• Topics / Politics and human rights

Paul Manafort Is the Tip of the Iceberg 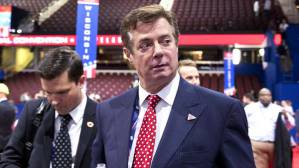 Trump’s campaign chairman is under the microscope for his dealings in Ukraine, but he is part of a much larger consulting industry that serves the interests of autocrats.

A few months after his 2010 election as Ukraine’s president, Viktor Yanukovych laid out his governing agenda before a New York audience composed primarily of executives from the blue-chip corporate and finance worlds. Yanukovych had won the election in a fair fight against Yuliya Tymoshenko, the leading candidate of the Orange Revolution forces. But officials and business elites in the United States and Europe were wary of the new government, given that Yanukovych and his political faction, the Party of Regions, had a reputation for being pro-Russian, highly corrupt, and unconcerned about the niceties of democracy.

On this day, however, Yanukovych came well-prepared to address an apprehensive audience. Nearly every sentence of his presentation included references to democracy, reform, or the fight against corruption. He promised to accelerate Ukraine’s transition to honest government. Foreign business interests, he pledged, would find in Ukraine a hospitable and graft-free environment for investment. If global corporations were looking for a profitable and politically stable setting, then Viktor Yanukovych’s Ukraine was the place to be.

We do not know whether someone from Paul Manafort’s consulting enterprise drafted Yanukovych’s remarks. Clearly, however, the new president had been tutored by advisers who were familiar with American politics. He told his guests what they had hoped to hear. He even survived one tense moment when a journalist asked him about the Orange forces’ contributions to Ukraine’s political development. Recall that the Orange protest movement had thwarted Yanukovych in his 2004 bid for the presidency, forcing a rerun after it was discovered that the first balloting, which gave Yanukovych the lead, was rigged. Asked about the Orange legacy, Yanukovych fumbled, hemmed, hawed, and generally impressed some listeners as a man still nursing a grudge.

Within a few months, the democratic Yanukovych had been replaced by a vengeful Yanukovych. His government launched a campaign to prosecute leading members of the previous government, Tymoshenko front and center. He took other actions that weakened Ukraine’s already fragile institutions. He allowed corruption to flourish. And eventually, in early 2014, he was forced to flee after attempting to crush a new protest movement triggered by his capitulation to Vladimir Putin’s demands that Ukraine tie its future to Russia rather than democratic Europe.

As a result of his role as campaign chairman for Donald Trump’s presidential bid, Manafort has run into unwanted publicity over his dealings with Yanukovych and the Party of Regions. Among other pieces of evidence, the notorious “Black Ledger, ” discovered in the aftermath of Yanukovych’s downfall, suggests that the American consultant received millions of dollars in off-the-books cash payments for his work in Ukraine. We still don’t know the precise nature of his business affairs, but we do know that Manafort labored to portray a man with an autocrat’s instincts as a convinced democrat to key American audiences.

Manafort served as a strategist and adviser to the Party of Regions from 2005 through at least 2012. According to the Wall Street Journal, he was heavily involved in the party’s revival after Yanukovych’s 2004 defeat, working especially hard to overhaul Yanukovych’s image in the run-up to the 2010 election. Under Manafort’s management, Yanukovych emerged as a better public speaker and a more disciplined candidate who seldom deviated from talking points prepared by Manafort’s team. After Yanukovych fled to Russia in early 2014, Manafort returned to help reorganize the remnants of the disgraced Party of Regions into a successor group that was able to compete in parliamentary elections.

Of course, Manafort is not alone in selling his services to autocrats and strongmen.

Dispensing political advice to regimes that imprison dissidents, censor the media, and persecute minorities is a growth industry, both in America and Europe.

Until rather recently,  Azerbaijan was represented by a battalion of lawyers, political operatives, and public relations specialists in Washington, London, and Brussels. While some of the consultants worked for the national energy company, others were hired directly by the government to explain away the regime’s miserable human rights record to the administration, members of Congress, think tanks, and other opinion makers in the United States.

Bahrain spent over $32 million between 2011, when political protests broke out, and 2015 on political consultants in the United States and Britain. During that period, the country experienced an explosion in the number of political prisoners and an often violent persecution of the Shiite majority.

Despite his efforts to hollow out Venezuela’s democratic infrastructure and his virulent anti-Americanism, the late Hugo Chávez had no difficulty in finding American consultants who would represent the interests of his government and the national oil company.

China’s interests are represented by an array of law firms and consultancies in Washington and Europe. Recently the Chinese government set up a competition among leading American public relations firms for a contract to burnish the country’s image, which has suffered from the current leadership’s crackdown on human rights lawyers and other dissidents.

Some consultants confine their work to legal and regulatory issues for economic entities, like state energy companies. But others work directly for the government or the political leadership, dressing up their image, excusing acts of repression, pounding home the country’s strategic importance. And in a time of American political polarization, doing PR work for autocrats is a thoroughly bipartisan enterprise, including Republicans like former House Appropriations Committee Chairman Robert Livingston and former Senate Majority Leader Trent Lott, as well as Democrats like former Senator John Breaux and veteran political operative Tony Podesta. The consulting universe is also inhabited by global figures like Tony Blair and Henry Kissinger, the founders and principal personalities of their respective consulting firms.

Fortunately, consultants are often unable to convince the world that obviously corrupt figures like Viktor Yanukovych are in actuality committed to the fight against graft. Or that Vladimir Putin is a man we can do business with. Or that Xi Jinping is building Chinese democracy in his own way and at his own pace.

It is nevertheless deeply troubling that the same techniques that have turned mediocrities into political winners in this country are being employed, by American image doctors, to persuade our political and business elites that autocrats who sneer at our values are actually committed to democratic reforms and harmonious coexistence.

Analyses and recommendations offered by the authors do not necessarily reflect those of Freedom House.