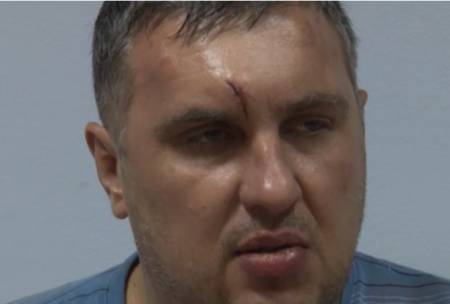 If a person has freely confessed to planning ‘sabotage’, there is no reason to prevent him from seeing a lawyer of his own choice.  This is what Russia is doing in the case of imprisoned Ukrainian Yevhen Panov, and it only confirms the suspicion that his televised ‘confession’ to acts of ‘sabotage’ in Russian-occupied Crimea was given under duress.

Russia is continuing its efforts to persuade an unconvinced world that Ukraine’s military intelligence was planning acts of sabotage against Ukrainian Crimea which Russia invaded and is still occupying.  The FSB’s assertions of major incidents alleged to have taken place during the nights from 6-7 and 7-8 August were backed only by the supposed confession on TV of Panov, who showed clear signs of beating and then later by two other men’s ‘confessions’..

All the claims have been dismissed by Ukraine’s military intelligence.  That, of course, is only to be expected, however, their denial, unlike the ‘confession’ is given considerable weight by the lack of anything to confirm the FSB’s claims.  Except the one thing that Russia has come up with in all cases involving Ukrainians taken prisoner in Russia or occupied Crimea -  ‘confessions’.

There is an urgent need for Panov to be given access to a proper lawyer, the one his family have organized to represent him.   Panov’s brother Ihor Kotelyanets has told the Crimea Human Rights Group that the lawyer they found in Crimea has been trying without success to see his client for several days now.  The investigator is claiming that Panov already has a lawyer.

Panov has no independent access to lawyers, meaning that any ‘lawyer’ other than the one appointed by his family, has been provided by the investigators themselves.

Olha Skripnik, Head of the Crimea Human Rights Groups, believes it possible that Panov is being forced to reject any lawyers except those which suit the investigators and FSB.

It is easy to see what suits the FSB and investigators by looking at other cases where Ukrainians have been imprisoned and tried in Russia.

Yury Soloshenko, then 72 and with a heart condition, was arrested in August 2014 and accused of ‘spying’.  After it was finally learned what had happened to the pensioner when he arrived in Moscow, his family arranged that human rights lawyer Ivan Pavlov would represent him.  Pavlov was quite simply prevented from seeing his imprisoned client, while in the meantime Soloshenko was placed under enormous pressure to accept the investigators’ ‘lawyer’.  The latter – Gennady Blokhin – persuaded him to ‘confess’, claiming that he would then be returned to Ukraine.  Instead he received a 6-year sentence (which was only so ‘short’ because Soloshenko was by then almost 74).

It is surely indicative that in all other cases, except that of the one female prisoner Nadiya Savchenko, there is a clear divide depending on whether or not the person has a lawyer of their own choice.

Mykola Karpyuk and Stanislav Klykh were held incommunicado for long periods (Karpyuk 18 months, Klykh – 10).  A series of ‘lawyers’ were brought in to sign any relevant documents.  Both men immediately retracted all confessions as soon as they were provided with real lawyers.

Serhiy Lytvynov ‘confessed’ to heinous war crimes with the video first shown by Russia’s Investigative Committee, then by all pro-Kremlin media.  Soon after Viktor Parshutkin began representing him, he succeeded in forcing the Investigative Committee to withdraw the charges, since the alleged victims and the streets they supposedly lived in were proven to be fictitious.

Gennady Afanasyev, one of the four opponents of Russia’s annexation of Crimea arrested in May 2014, found the courage to stand up at the trial of Oleg Sentsov and Oleksandr Kolchenko and say that his testimony against them and ‘confession’ had been given under torture.  He had not until then had a proper lawyer.

Valentin Vyhivsky did not get legal representation until after his initial conviction for ‘spying’.  This was based on confessions obtained through torture which included mock executions.  He was sentenced to 11 years, with the ‘lawyer’ appointed by the investigators clearly working for the latter.

Three men – Panov, Ridvan Suleimanov and Andriy Zakhtei -  have now been remanded in custody in Crimea in connection with Russia’s allegations of a ‘Ukrainian sabotage’ plot.  Other arrests are also likely.  Why not, when the prosecutor and courts are endlessly servile and ‘confessions’ can be used to conceal the lack of any semblance of real evidence?