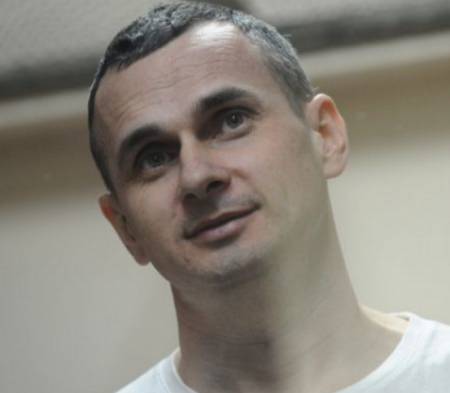 A letter has arrived from Ukrainian filmmaker Oleg Sentsov almost exactly a year after the ‘absolutely Stalinist trial’ in a Russian military court of Sentsov and civic activist Oleksandr Kolchenko ended in 20- and 10-year sentences.  More about their persecution below, but first his powerful letter.

“I am spending a third year in a Russian prison.  This is the third year that war is being waged against my country.  The enemy is fighting in a dirty manner, furtively, pretending that they have nothing to do with it.  War is never nice, but the truth is nonetheless on our side.  We did not attack anybody; we are defending ourselves.

As well as this, main enemy, whom we all know and who is from outside, there are others also. They’re smaller-fry, but they’re inside, here, under the skin, they’re almost our own. Yet they are not for us, they’re for themselves. Some have remained from the old times, some simply want to live as they did before, but under a difference face. It won’t work.  That greater [enemy], and these smaller fry have different goals, however we are on a different road. And I won’t say that we’ll see who beats whom.  I already know who will win. You cannot stop the struggle for freedom and progress.

There are a lot of us in captivity in Russia, and even more in Donbas.  Some have already been released, others are waiting and hoping.  Each has their own story, their own conditions. Some of the prisoners are seeking publicity, others are really working. Trying to become more well-known in order to be exchanged more quickly than others – that’s not a road I want to take. I don’t want to claim more for myself. I would like to remain simply a name in the overall list. They probably won’t suggest that I’m freed last, yet that would be a good choice.

Here, in captivity, we are restricted.  Not even freedom – that they can’t take away, but in the fact that there’s so little we can do for the country. More exactly, there’s only one thing we can do – hold firm.   There is no need to get us out at any price – that won’t bring victory any nearer. Use us as a weapon against the enemy – that yes.  Be aware that we are not your weak point.  If it’s intended that we become the nails in the coffin of the tyrant, then I would like to be such a nail.  Just remember, that this nail will not bend.”

Oleg turned 40 on July 13 in the Yakutia oblast prison where the Kremlin sent him to keep him as far from the public eye, from the media and foreign diplomats as possible.

He, Kolchenko and two other opponents of Russia’s invasion and annexation of Crimea – Gennady Afanasyev and Oleksiy Chirniy – were arrested in May 2014.  They were held incommunicado in Simferopol and tortured, then taken illegally to Russia where the FSB claimed that Sentsov had masterminded and the others had taken part in a ‘Right Sector terrorist plot’.

There was no evidence at all, only the videoed ‘confessions’ of Chirniy and Afanasyev.  On July 31, 2015, despite already being in a Russian prison and likely to face reprisals for his courage, Afanasyev stood up at the trial of Sentsov and Kolchenko and stated clearly that any confessions had been extracted through torture.  He retracted all his testimony and later, when he was finally given a real lawyer, described in detail the torture he had been subjected to.

His account is totally in keeping with the allegations made from the beginning by both Sentsov and Kolchenko of torture.

In his final address to the ‘court’ on Aug 19, 2015 Sentsov spoke of cowardice being the greatest sin in this world, with that including personal betrayal.  Both he and Oleksandr Kolchenko have, from the outset, remained true to themselves and unbroken.  Sentsov’s steadfast refusal to ‘cooperate’ with the FSB, despite all the torture and threats, was the reason that he was accused of having ‘masterminded’ the non-existent ‘terrorist plot’.

Please write to Oleg Sentsov, Oleksandr Kolchenko and to all the prisoners Moscow is holding in Russia or Russian-occupied Crimea!

The letters need to be in Russian.  If that is a problem, you could copy-paste the brief message suggested, maybe with photos, pictures, etc.

It is Independence Day on August 24 and we are asking people to send sunflowers (pictures!) to all the prisoners.  Please see the text here for suggested messages, addresses and, of course, photos of sunflowers!

The addresses for Oleg Sentsov and Oleksandr Kolchenko are also below, with a kind of general letter unrelated to Independence Day, if you prefer. 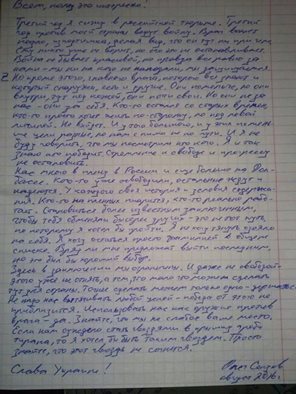