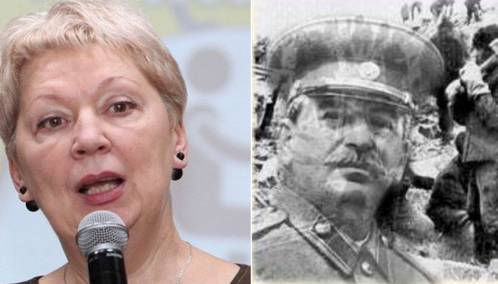 It may possibly have been coincidence that President Vladimir Putin’s new appointment was announced on August 19, the 25th anniversary of the coup which led to the collapse of the USSR.  The news could not have been more indicative of Russia’s slide into its Soviet past.

Vedomosti quotes an unnamed person “close to the current management of the Education Ministry” as calling Vasilyeva’s appointment a “spit in the face for modernization” with Vasilyeva described as an arch conservative who is in favour of prioritizing religious education.  In the one sphere, he adds, where the need had been understood for international cooperation and global competitiveness, the country seems to be moving towards isolation.  The same source assumes that under Vasilyeva, there will be some kind of Orthodox Christian education throughout all school levels.

56-year-old Vasilyeva had up till now been the deputy head of the civic projects department within President Vladimir Putin’s Administration.  This may sound bland and bureaucratic.  It is not.  The department was created in 2012 after Putin’s third term as president aroused widespread protest which in turn provoked a whole new scale of repression.  The department is supposed to “consolidate patriotic upbringing and spiritual and moral foundations”

One of the main projects, Kommersant wrote back in 2013, was an exhibition entitled ‘Orthodox Rus. The Romanovs’.  This presented Russia and the Romanov dynasty as facing and conquering all kinds of internal and external enemies.  The Decembrists, who were always viewed as heroic champions of freedom and progress are claimed to have been planning to “destroy the Tsar’s family and divide the country into several states” and to have been ready to subject Russia to “bloody chaos”. The video entitled ‘Russia from 1917 to our times’ which ends the exhibition concludes with “the revival of Russia with Putin and the Patriarch” [Patriarch Kirill from the Russian Orthodox Church].

The department was supposed to come up with a concept framework for patriotic education, with this and the task of producing a single history textbook were given priority.

Kommersant reported that the concept for this textbook had long been written, but that it still aroused controversy.  A couple of weeks earlier, it wrote, Vasilyeva had given a lecture to members of the ruling United Russia party.  According to a person present, Vasilyeva had made in clear that Stalin, for all his failings, had been “a blessing for the state” [государственное благо] since on the eve of the War, she claimed, he had engaged in uniting the nation, had reinstated the heroes of pre-revolutionary Russia and promoted the Russian language and literature, with this essentially making it possible to win the War.  The Bolsheviks on the other hand had being about dividing the nation, destroying statehood and national ties.

This has been widely quoted, although it cannot, in fact, be verified.  Other assertions, however, can be.  It is not in dispute that Vasilyeva maintains that the Bolsheviks rejected history prior to 1917, and that from then until 1934, the term ‘patriotism’, and the understanding of it, were lost altogether.

“In the past we couldn’t have a Fatherland, but now that we have overthrown capitalism, and we have people’s rule, we have a Fatherland, and we will defend its independence”.  According to Vasilyeva, it was then in 1931, that the concepts of Fatherland and patriotism were ‘rehabilitated’, with this “returning the Fatherland as a synonym of pre-revolutionary Russia”.

Then came 1991, and the collapse of the Soviet Union which Putin has claimed was the “greatest geopolitical catastrophe of the twentieth century”.  Vasilyeva also clearly condemns the changes 1991 brought, claiming that the “same experiment as in 1917 was repeated”.

Both of these developments saw attempts to wipe out history, she alleges, an attempt “to blacken the past, to try to expunge tradition from the public consciousness.   People again stopped speaking about ‘patriotism’.

Vedomosti gave a link to this address with an apparent quote that the estimated number of victims of the Terror is much exaggerated.  No, Vasilyeva did not use those words, however her apologists should be less ingenuous.  Vasilyeva speaks of how Vitaly Korotych’s Ogonyok magazine came out every Wednesday, and talks of “the myths” created in that journal, saying that if you counted up the number of victims, there would be nobody left.  The implication is clear that these are stories that are exaggerated, by people who were rejecting the ‘Fatherland’s history’ and who are not ‘patriotic’.

Ogonyok was particularly important in those first years of perestroika and after 1991 in publishing the truth about the Terror.  Local branches of the Memorial Society also helped uncover the truth about the terrible crimes committed.  Most importantly, they made it possible for huge numbers of Russians, Ukrainians and people from the other Soviet republics to finally learn how their parents or grandparents had died.

Vasilyeva’s academic interests, starting from her PhD thesis, have focused on the history of the Russian Orthodox Church. She appears to seriously contend that the revival of the Orthodox Church after Bolshevik repression began from 1931, with this once again viewed as thanks to Stalin.

Vasilyeva’s appointment comes just over 9 years after the first signs of a new approach in presenting Russian and Soviet history.  After a speech given by Putin to teachers in June 2007, a manual by Alexander Filippov appeared, describing Stalin as “one of the most successful leaders of the USSR”.  Stalin’s aim in both domestic and foreign policy, it was stated, had been the restoration of the Russian Empire.  The purges had “led to the formation of a new governing class, able to cope with the task of modernization given the shortage of resources – unwaveringly loyal to the upper echelons of power and irreproachable from the point of view of executive discipline”.  It was material like this that by October that year made Putin welcome “certain positive moves”,  noting that “up till quite recently we read things in textbooks that made our hair stand on end…”

Since then there has been an effective ‘rehabilitation’ of the dictator, not his victims, and serious distortion of historical fact, especially about the Second World War.

Human rights lawyer Ivan Pavlov recently wrote about how common it is to find portraits of Stalin in the offices of investigators, FSB officers, etc.

The ‘positive moves’ Putin spoke of have resulted in people being prosecuted for telling the truth about, for example, the Soviet Union’s invasion of Poland in September 1939 and the Molotov-Ribbentrop Pact.

In July 2015, as a new Stalin museum and monument were unveiled in Tver, an article was published by Russia’s Culture Minister Vladimir Medinsky in which he effectively defended Stalin’s role in the country’s history.

All of this is coinciding with measures aimed at concealing information about Stalin’s crimes.  The notorious Perm 36 Labour Camp which had provided vital information about the GULAG was temporarily closed, then opened effectively eulogising those who administered the repression.  The archives of all the secret police [officially ’state security’] bodies (Cheka, NKVD, KGB, etc.) are now to remain classified as secret for another 30 years.  This includes the vast bulk of material regarding the Great Terror of 1937-1938, which Russia’s new Education Minister recently suggested was not nearly as bad as unpatriotic individuals make out.

And even if it was, we will still remember Stalin as having ‘rehabilitated’ the concept of ‘patriotism’ – while killing millions of his compatriots.