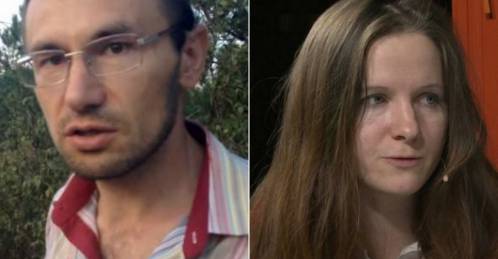 Telling the truth is now seemingly qualified as a threat to Russia’s national security.  There could certainly be no other way in which Yevhenia Zakrevska, a young Kyiv lawyer, could pose a danger, yet she has just been denied entry to Russian-occupied Crimea.  The legal norm cited, she was told, means that the FSB [Russian security service] sees her as a threat.

The truth is undoubtedly damning.  There are serious grounds for suspecting the FSB of direct involvement in a failed attempt to abduct Crimean Tatar human rights activist Emir-Huseyn Kuku.  He has since been arrested on trumped-up charges and is in effectively indefinite custody.  Zakrevska is representing him in an application to the European Court of Human Rights and also in the criminal investigation launched by Ukraine’s Prosecutor General, in which Kuku is a victim.

40-year-old Kuku  joined the Crimean Contact Group on Human Rights after young Crimean Tatars began being abducted and/or disappearing in the months after Russia’s invasion and annexation of Crimea.  He was active in monitoring rights abuses in the Yalta oblast where he lives with his wife and two small children.

The first ‘episodes’ would not be worth mentioning were it not for what came later.  Kuku was pestered by Alexander Kompaneitsev, a former Ukrainian SBU officer and turncoat, now working for the Russian FSB.  Kuku is from a much respected family and his father was a veteran of the Crimean Tatar national movement.  Kompaneitsev doubtless decided he would get brownie points for ‘recruiting’ Kuku, and tried to persuade Kuku to become an informer.  He failed.

On April 20, 2015, Kuku was set upon from behind by two men who began beating him.  He managed to turn and recognized one of them as a person who had obviously been following him.  The men proceeded to pummel him around the head and kidneys.

He was still assuming this was a robbery and since he did not know if the men were armed, did not try to physically resist.  He did, however, shout.  He is well-known in the area, and first one car stopped, then others.

They had Kuku’s head to the ground, but he heard how those who’d stopped demanded to know what the assailants were doing.  When one said that they were from the police, he demanded that they show their ID.  They responded with foul abuse and told the crowd which had by that time gathered to disperse.

They had just pulled out a weapon when a white van drove up.  At least four masked men in full military gear with machine guns jumped out and demanded that the people around leave.  They violently forced Kuku into the van, and drove off, followed by some of those who’d stopped to help Kuku and feared he was being abducted.

In the van they proceeded to beat him, and he heard one of them on the phone tell somebody that they were being followed and needed to change cars.  The masked men were angry that he had attracted a crowd – he, not the men who had attacked him.

They stopped the car somewhere in Yalta, and kept getting in and out, obviously consulting with somebody.  Presumably the attention which Kuku’s attack had aroused proved a deterrent, and they finally stopped beating him and announced that they needed to carry out a search of his home.

It was then that Kompaneitsev appeared and stated that they were carrying out a search in accordance with a court warrant.

Only the latter part of the run-in with ‘enforcement bodies’ was reported at the time.  Kuku posted photos of the marks from beating he had received, and said that if he disappeared, they should look for him at the Yalta FSB office.

In December 2015 new charges seemed to have emerged under Russia’s notorious ‘extremism’ laws.  This was in connection with material posted on his Facebook page.

There was no mention then of Hizb ut-Tahrir, the pan-Islamist organization which is legal in Ukraine and in most other countries.  Russia has declared it ‘terrorist’ without providing any grounds for this, and uses it for multiple arrests and guaranteed long sentences (see: Terror on a Conveyor Belt in Russian-occupied Crimea).

On Feb 11, 2016, armed searches were carried out of a number of Crimean Muslim homes and 20 people taken away.  There are photos showing that Kompaneitsev was personally involved in the searches.   Kuku and three other men – Muslim Aliev, Vadim Siruk and Envir Bekirov – remained in custody and are now facing charges of so-called ‘involvement in a terrorist organization’.

Damir Minadirov, a good friend of Kuku’s, also got an armed visitation.  He, however, did one thing before opening the doors and may have protected him from the same fate as the other men - he posted a message about the visitation on Facebook.  The ‘officers’ were furious when they learned of this, but did begin behaving themselves.

Later, however, Minadirov was taken to the FSB where Kompaneitsev turned up, said that the others had been imprisoned and tried to get Minadirov to give testimony against them.  The ‘persuasion’ was first verbal, and then with the use of a plastic bag over his head.   He was also threatened with being arrested, together with the others, if he did not agree to collaborate with the FSB.   Minadirov refused, but immediately afterwards left Crimea and is now living in Kyiv.

Both Minadirov and Popkov are convinced that Kompaneitsev’s personal animosity towards Kuku has played a major role in the new prosecution.  There are also strong grounds for believing that the first arrests and particularly those of Ruslan Zeitullayev and Ferat Saifullayev were also motivated by turncoat Kompanetsev settling old scores dating back to his involvement in corruption back in 2012.

In May this year another Crimean Tatar activist Ervin Ibragimov was abducted.  He has not been seen since, and it is difficult not to suspect that the April attack was a prelude to Kuku’s abduction.

Instead, Kuku is facing absurd charges and a very real threat of a long sentence.