Raising the Ukrainian Flag Volodymyr Rybak and Many Others Died For 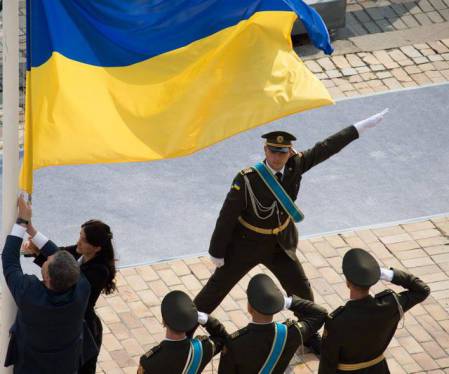 The 25th anniversary of Ukraine’s Independence would have been a very special date under any circumstances. After Maidan and then Russia’s invasion, that anniversary and the Day of the Ukrainian Flag have become imbued with acute poignancy.  It was therefore fitting that the Ukrainian Flag on Tuesday was raised by the President and the daughter of Volodymyr Rybak, the Horlivka councillor murdered for defending that very flag.

“I am convinced that thanks to our unity and love for our native land, what Volodymyr Rybak struggled for to his last breath will come to pass. Ukraine will once again be whole. As my father said: “Our mouths cannot be silenced while we know the words of the national anthem, they cannot block our ears while we remember how it sounds, and nothing can close our eyes while the blue and yellow flag is before us” 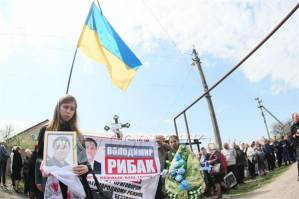 Panykhyda [a service of remembrance] for Volodymyr Rybak

42-year-old Volodymyr Rybak was a Horlivka City Council deputy who was abducted after a demonstration on April 17, 2014.  Militants from the so-called ‘Donetsk people’s republic’ had taken down the Ukrainian flag and put up their own which Rybak tried to remove.  His tortured and mutilated body was found 5 days later in a small stream outside Sloviansk, together with that of19-year-old student Yury Popravko.  Theirs were not the only such murders almost certainly attributable to the militants under the command of Russian former military intelligence officer Igor Girkin [nom de guerre: Strelkov].

It soon became very dangerous to be seen with a Ukrainian flag.  Nonetheless, the courageous people representing different faiths who stood each day at a Prayer Marathon in the middle of Donetsk held out for many months. 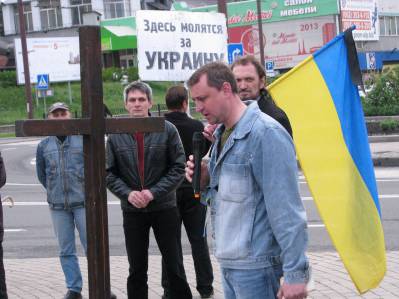 Sergei Kosyak and others at the Prayer Marathon [photo his]

Sergey Kosyak, one of the initiators of the Marathon, recalls that from February to August 2014, they stood in prayer under the Ukrainian flag. 16 participants ended up taken captive, with 5 of them subjected to mock executions. One person was killed, and two are still held hostage.

Pastor Sergey explains that people even came up and told them to take away the flag and they could pray as much as they wanted to.  They refused “since for us it was more than a flag”.

“We are here, - the Pastor explained on one occasion – to defend the honour of this flag.  Various types of evil have been committed at times under it, but today we are rehabilitating its symbol, praying under it for peace, for love, for the people living in our country”

In Russian-occupied Crimea they ‘only’ prosecute people for Ukrainian or Crimean Tatar flags.  Leonid Kuzmin, head of the Ukrainian Cultural Centre has already received an official warning about the ‘inadmissibility of breaching anti-extremism legislation’.  Kuzmin is familiar with all this insanity.  In March 2015, he and three other Ukrainians were detained while taking part in a totally peaceful gathering to mark the 202nd anniversary of the birth of the great Ukrainian poet Taras Shevchenko.  The police later claimed, and a court under Russian occupation agreed, that the Ukrainian flag was a ‘prohibited symbol’

On this Independence Day, Russia is holding even more political prisoners in occupied Crimea and Russia.   Greet them with what is, after all, a very special day.  Details, addresses,  and sunflowers! – here