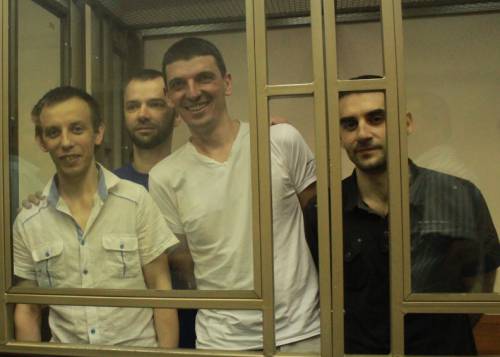 The ‘trial’ is ending in Rostov [Russia] of four Crimean Muslims from Sevastopol, who are accused by the Russian occupiers of involvement in an organization which is legal in Ukraine.  The prosecutor has demanded sentences of from 7 to 17 years.  Since the event is taking place in the same court that on August 25, 2015, sentenced two other Crimean opponents of annexation – Oleg Sentsov and Oleksandr Kolchenko to 20 and 10-year sentences for nothing, nobody is expecting acquittals, despite the lack of any grounds for criminal charges at all.

The men are accused of involvement in Hizb ut-Tahrir, a totally peaceful pan-Islamist organization which back in 2003 Russia’s Supreme Court declared ‘terrorist’, together with 14 other organizations.  No grounds were given and the ruling was effectively concealed until it was too late for the organization itself, and human rights NGOs to appeal against.

Not only is there nothing incriminating against Hizb ut-Tahrir, but there is also no proof that the four men are in fact members. All four men deny such involvement.  Ferat Saifullayev; Rustem Vaitov and Nuri Primov all gave testimony this week.  Ruslan Zeitullayev, the 30-year-old father of three who is accused of ‘organizing’ a Hizb ut-Tahrir group refused to testify, citing Article 51 of the Russian Constitution.  His reason was simple:  he has seen that the court is biased, and he does not expect objective assessment.

Every report from the court hearings suggests that Zeitullayev is right.  Entirely valid applications are automatically rejected, and there are constant infringements of procedural law.

The men are effectively being tried on the basis of ‘conversations in the kitchen’.  As is often the case with such prosecutions, Russia has resorted to testimony of a secret witness, who could not even be cross-examined properly.  The man, whose voice was (illegally) distorted, was clearly being prompted by somebody and there were long gaps after he was asked a question.  Even the prompter could not prevent a number of totally contradictory statements.

None of this stopped the prosecutor on Aug 24 from demanding a 17-year maximum security prison sentence for Zeitullayev.  Saifullayev faces an 8-year sentence in a medium-security prison for alleged participation in the organization, while the prosecutor asked for 7 years in the case of Nuri Primov and Rustem Vaitov.  The proposed sentences are supposedly lighter to allow for extenuating circumstances – all but Primov have very small children.

Emil Kurbedinov, a rights lawyer who was illegally permitted only to defend one of the four men, hopes he is proven wrong, but expects the worse.  What else, in fact, can be expected when the entire trial is so clearly politicized?  The criminal code in fact imposes minimum sentences of 15 years for the so-called organizing, and 5 for participation.

Three of the men have now been in custody for over 18 months; Saifullayev since April 2015.  All complain of the conditions.  A typical feature of this appalling case is that the men are able to eat only food they receive In parcels or from local Muslims since the SIZO or remand prison tries to give them pork which they, as practising Muslims, cannot eat.

There have also been deliberate attempts to humiliate Zeitullayev.  He was recently placed in a punishment cell after the prison staff suddenly demanded that he take off all his clothes. There were no grounds except to demonstrate their power, and, perhaps, to justify punishment since Zeitullayev had religious grounds for being unwilling to stand totally naked.

The arrests in January 2015 were, unfortunately, a ‘test run’ and since February 2016 10 other Muslims, all but one Crimean Tatar, have been arrested.

There are also, however, very strong grounds for believing that, at least in Zeitullayev and Saifullayev’s case, they are being targeted by Alexander Kozhemyaka, a former Ukrainian security service officer who turned traitor and is now working for Russia’s FSB in Crimea.

The defendants all say that Kozhemyaka waged a personal vendetta against them back in his time in the SBU, and that Zeitullayev and Saifullayev had even made complaints about his treatment of them back in 2012-2013.

According to Kurbedinov, there is evidence confirming the men’s account of an attempt to seize control of the men’s community and valuable land on which their building was situated.  SBU officers are said to have helped those from a conflicting group, with Kozhemyaka and others doubtless annoyed when a Ukrainian court back in 2012 found in favour of Zeitullayev and his community.

It was noticeable that most of the supposed prosecution witnesses denied having given testimony against the men, and showed courage in court by refusing to say anything against the four.   One person – Timur Afrandzha had himself faced armed searches in January 2015 and was now frightened to even meet with practising Muslims, etc.  He nonetheless had nothing negative to say about the men, and confirmed that nobody had tried to ‘recruit’ him.

Please see Terror on a Conveyor Belt in Russian-Occupied Crimea for more information about all these arrests which seem clearly designed to instil terror among Crimean Tatars and any other Ukrainians who convert to Islam.

The authoritative Memorial Human Rights Centre  the first four men, now on trial as political prisoners.  Its hard-hitting statement condemns the prosecution in occupied territory of Ukrainian nationals, especially where the organization is legal in Ukraine, and calls the arrests “part of the campaign of repression unleashed in the occupied peninsula”.

PLEASE WRITE TO RUSLAN ZEITULLAYEV AND THE OTHERS!