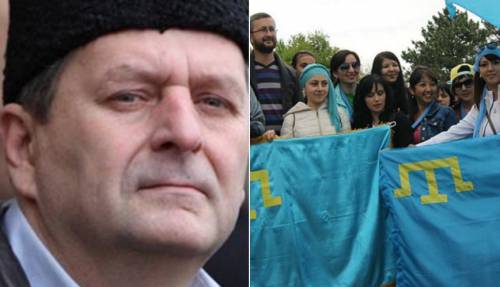 The current ‘trial’ of imprisoned Crimean Tatar leader Akhtem Chiygoz is proving as openly contemptuous of the law as the charges themselves which are in direct breach of Russia’s own legislation.  Chiygoz has been prevented from attending his own ‘trial’, or even properly hearing what is being said, and the prosecutor makes no attempt to conceal his racist views.  Why indeed should he, when the court accepts all irregularities, rejecting any protests from Chiygoz or his defence?

Chiygoz, the Deputy Head of the Crimean Tatar Mejlis [representative assembly] has now been imprisoned for over 18 months, and Russia clearly has no intention of releasing him.   He and five other Crimean Tatars, two of whom – Ali Asanov and Mustafa Degermendzhy – have also been in custody for over a year, are charged with involvement in a pre-annexation demonstration over which Russia has no jurisdiction.  As if that were not sufficient, the charges are woolly and incomprehensible, making the court hearings surreal in their absurdity.  Chiygoz is charged with ‘organizing mass riots’, the others taking part in them.  In fact, all video footage shows Chiygoz actively working to calm demonstrators and there is nothing directly against any of those charged.

At the preliminary hearing on July 20, the judge separated the trials and ordered a further violation of the men’s rights by prohibiting them from being present at the hearings.  The measures are fairly clearly aimed at muffling the defendants and trying to prevent them presenting a single united front.

Chiygoz’s address to Ukrainians on Independence Day, August 24, make it quite clear why Russia and its occupation regime puppets are trying to keep the Crimean Tatar leader out of the courtroom.  In his short address, he wrote that this was the third year that Ukraine was marking Independence Day with some of the country under occupation. “Some of us are in prison for having with honour and dignity declared our citizenship of Ukraine and our refusal to recognize Crimea as Russia. Crimea itself has become a ‘prison zone’ for freedom-loving people.”   At a time when the people of Ukraine are facing a threat to their independence,  “each of us must carry out their duty and defend their future and the future of their children!”

“We look with hope to the future and are convinced that Ukraine will become a successful democratic European country. It was for just such a future from the moment that Ukraine gained Independence that the Crimean Tatars have always and are continuing to struggle for”

In his accounts of the court proceedings, Chiygoz’ lawyer Nikolai Polozov has drawn attention to the disgraceful behaviour of the prosecutor Alexander Dombrovsky who, in Chiygoz’s forced absence, makes foul remarks and jokes about him.

Dombrovsky went even further while questioning one ‘witness’ on August 20.  He asked Vladimir Kosarev to confirm that “the demonstrators were divided into two groups – Crimean Tatars and residents of Crimea”.

Chiygoz was outraged, calling this “a demonstration of deep chauvinism and incitement to inter-ethnic enmity”.  He was backed by the defence and ignored by the court.

Typically, Kosarev did not provide any evidence against Chiygoz.  The prosecution has been trying to claim without any evidence that the crushing that day which resulted in one person’s death was due to action from the pro-Ukrainian (mainly Crimean Tatar) demonstrators.

Kosarev denies this totally, as he does any specific forms of violence against him. His injury was not caused by the pro-Ukrainian demonstrators, he said.

Since the ‘trial’ is for the moment endless questioning of alleged witnesses, it is worth noting that Novaya Gazeta reported in late February 2015 just how the investigators were finding them. On February 2, 4 days after Chiygoz’s arrest and 11 months after the events, they invited Simferopol residents to come forward “even in the absence of bodily injuries”.

In its statement on Feb 15, 2016 declaring Chiygoz, Asanov and Degermendzhy political prisoners, the Russian Memorial Human Rights Centre pointed to the clear lack of jurisdiction and dismissed the formal excuse presented that two of the alleged ‘victims’ are Russian nationals.  Neither had sought medical treatment at the time, and Memorial noted that both in their cases, as in those of over half the alleged ‘victims’, there were serious doubts as to the authenticity of any injuries.  They pointed out also that the fact that only Crimean Tatars had been targeted was an indication of the political motives behind the prosecution.

The lack of any substance to the charges, and the questionable nature of the prosecution witnesses’ testimony is seen at each court hearing.

On September 1, for example, Sergei Sinetsky gave testimony.  Like many of the other alleged ‘victims’, he is a former member of the Ukrainian law enforcement bodies who switched allegiance.  He is now deputy head of the department guarding high-ranking officials and says that he was asked to appear as an ‘aggrieved party’ by Sergei Aksyonov, the person installed as head after Russian soldiers seized control.

Sinetsky claims that he was injured in the crush, but did not seek any medical treatment at the time.

Sinetsky even recalls seeing the discussion between Aksyonov and the Head of the Crimean Tatar Mejlis Refat Chubarov about measures to ensure that the demonstration passed peacefully.

He also has nothing to say about Chiygoz’ role in ‘organizing mass riots’.  He asserted that these had been organized by the Mejlis and leaders of the Ukrainian ultra-nationalist movement Right Sector.  Like others challenged on such assertions, he was unable to give any justification or source of information for such an opinion.

On Aug 23, three other such former Ukrainian police officers who betrayed their oath were questioned.  They were more obliging in claiming, against all video footage, that the Crimean Tatars and other pro-Ukrainian demonstrators were somehow a violent mob, but no more convincing.

Pavel Petrov claimed, for example, that he had seen Chiygoz walking through the corridor created by the police giving instructions. The implication was clearly that Chiygoz was causing the crush.  The trouble is that Chiygoz was speaking in Crimean Tatar which the officer could not understand.  He asserted that later “a Muslim he knows” had translated the words for him.  Not unexpectedly, he “didn’t remember” the name of this person.

There were around 10 thousand Crimean Tatars and other Ukrainians concerned that an attempt was planned to carry out an effective parliamentary coup.  They were opposed outside the parliamentary building by a smaller crowd of pro-Russian demonstrators led by Aksyonov.  He was at the time one of a tiny number of MPs from the marginal Russian Unity party, however it was he who installed himself as leader after a parliamentary ‘session’ overseen by Russian soldiers with machine guns.

There are grounds for believing that the pro-Ukrainian demonstration that day stopped Russia from achieving an effective coup without direct intervention.  Russia as occupying regime is now rewriting – or simply flouting – the law and history in prosecuting representatives of the Crimean Tatars who prevented a covert coup the day before.