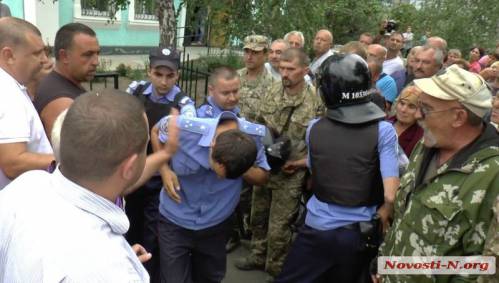 Three police officers are currently in detention after a 32-year-old man was beaten and fatally shot while in handcuffs in the early hours of August 24.  The response from the head of the National Police and assurances that nobody will escape punishment for this crime are undoubtedly welcome.  The reaction, however, came after local residents gathered in force, clearly fearing that the culprits would not be prosecuted. Mykolaiv has already had one such high-profile case after 2 police officers from Vradiyivka were accused of brutally raping a young woman and leaving her for dead.  If that was under the regime of President Viktor Yanukovych, in conditions of total degradation of the law enforcement bodies, this killing comes after Maidan, and all eyes will be on the authorities.

The police had been called to the home of 32-year-old Oleksandr Tsukerman from Kryve Ozero in the Mykolaiv oblast by his wife who complained that he was drunk and causing trouble.  He had apparently used a spade to smash the back window of a taxi car belonging to a neighbour, though there are varying reasons given as to why.

The police initially claimed that Tsukerman had gone for them with a spade in his hand and had needed to be restrained through force and handcuffs.

Witnesses and Tsukerman’s wife and mother are adamant that Tsukerman had got into his own car and had fallen asleep.  They say that three police officers arrived, took him over to their car and began beating him.  Another three officers then turned up.  By this stage, both Tsukerman himself and his family were pleading with the police to stop.  The police officers continued, despite even the presence of Tsukerman’s 13-year-old son who was obviously distressed.  They called an ambulance only after Tsukerman stopped reacting, with the paramedic immediately saying that Tsukerman was dead.  Novosti-N reports that the police then fled the scene, leaving their victim’s body to lie there all night.

A forensic examination has now established, however, that the immediate cause of death was not the beating, but four shots at close range, including to the heart, from a shot gun.

Top officials are not denying that the victim was beaten and that he was shot when he was already in handcuffs and could not possibly have presented any danger.

Six police officers are suspected of some degree of involvement.  Three, including the person believed to have fired the shots, have been remanded in custody.  The other three appear to be cooperating with the investigators, but were reported on August 26 to have been suspended from duty.

All three men in custody are charged under Article 365, part 3 – exceeding official powers by law enforcement officers leading to grave consequences.  This carries a punishment of between 7 and 10 years.  The man accused of firing the fatal shots – Denis Lyakhvatsky has also been charged with murder.  Lyahvatsky denies the homicide charge, while admitting ‘exceeding official duties’. The charges under Article 365 are often brought in cases where people have died, even when others, including torture, seem much more appropriate.  If all three men were beating a man in handcuffs, this had nothing to do with their official duties.

Khatia Dekanoidze, head of the Ukrainian National Police announced on Aug 25 that the Kryve Ozero police station whose officers were involved in the killing was to be disbanded.  The Minister of the Interior Arsen Avakov and Prosecutor General Yury Lutsenko have both promised that a proper investigation will be carried out and that those responsible will be severely punished.

What remains unnerving is the slight delay in the news becoming widely known, and the question of how much would have come out had local residents not gathered, determined to prevent a cover-up.

News of the killing spread and by 11 a.m. when police from Pervomaisk arrived to take the body away, a crowd of several hundred stopped them, saying that all the police in Pervomaisk are corrupt.  The family and others present only agreed mid-afternoon to allow Tsukerman’s body to be removed for examination on condition that this was carried out in Mykolaiv, not in Pervomaisk.

There were even greater difficulties getting the suspects out of the prosecutor’s office to a police van taking them to Mykolaiv, past a 300-strong crowd.  Despite an agreed corridor, a few of the local residents broke through the police cordon and began beating the officers.

It has since become clear that one of the officers had failed the police re-attestation procedure, but managed to get himself reinstated via a court ruling.

In June 2013, a young woman from Vradiyivka was raped and savagely beaten after leaving a local discotheque.  She managed to drag herself to the town and was taken to emergency care.  She was able to identify her assailants, naming two police officers, and a taxi driver.

Attempts at the time by the police to shield one of the officers prompted a huge crowd to storm the police station and led to protests throughout Ukraine.

There were initially threats of criminal proceedings against the protesters however the level of outrage and publicity over the case far beyond Ukraine led to both officers being arrested.  The two ex-police officers were sentenced to 15 years’ imprisonment.  The verdict, however, was passed on Nov 30, 2013, when all attention was focused on the brutal dispersal of young Maidan supporters in Kyiv, and the report of pressure being put on the victim’s family was scarcely noticed.    The same was also true of slightly earlier reports that other criminal investigations into crimes, including suspected murder had been quietly shelved.