Crimean Tatar fined in Russian-occupied Crimea for warning about repression 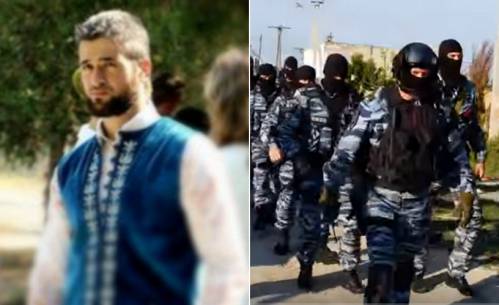 In December 2013, an attempt at night to violently crush the Euromaidan protests was thwarted in large part by St. Michael’s Monastery whose bells began ringing to warn of danger. No attempts were made by the Yanukovych regime to penalize the Monastery.  In Russian-occupied Crimea two and a half years later, a Crimean Muslim used a Mosque loudspeaker to warn of similar danger.  Seiran Saliyev was prosecuted and fined for supposedly ‘organizing an unauthorized demonstration’.

Saliev appealed against the original court ruling, but this was upheld by the Crimean Supreme Court under occupation on Aug 23. He plans to continue his struggle, saying that the charges are groundless.

He certainly did use the loudspeaker to inform that searches were underway, but says that it is absurd to call this ‘organizing’ any mass event.

“I informed that the enforcement bodies were carrying out searches. As a Muslim and a citizen I informed of their actions. These were open investigative operations.  It is unwarranted to accuse me of organizing a meeting, I didn’t organize any meeting”, Saliev stated in court.

In the early morning of May 12, a huge number of masked and armed Russian OMON riot police turned up in a part of Bakhchysarai, and carried out searches of the homes of four Crimean Tatars: Rustem Abilltarov; Zevri Abseitov; Enver Mamutov; and Remzi Mememov.  All four men were taken away and are now in custody, charged with involvement in Hizb ut-Tahrir.  This organization is legal in Ukraine and most countries, and Russia has never provided any sensible grounds for the decision, long kept secret, to declare the organization ‘terrorist’.  Despite the lack of any justification for criminalizing the organization or for accusing the men of involvement in it, they are among the 14 men so far facing seriously long sentences.  The ‘trial’ on identical charges of four Crimean Muslims from Sevastopol is currently ending in Rostov, with the Russian prosecutor having demanded sentences from 7 to 17 years.

These prosecutions are terrifyingly lawless, and have been described by Crimean human rights lawyer Emil Kurbedinov as a ‘conveyor belt’.  It is telling that one of the defence lawyers representing the Sevastopol men has pointed out that the prosecutor has simply copy-pasted an indictment used in Russia in 2013.

In declaring the four Sevastopol men political prisoners, the Memorial Human Rights Centre noted that in addition to the normal concerns about these so-called ‘Hizb ut-Tahrir cases’, Russia is now prosecuting Ukrainians on occupied Ukrainian territory over an organization which is legal in Ukraine.

There had already been many such armed searches by May 12, and certainly many other Crimean Tatars came out onto the street. Some, especially the young men, showed courage in demanding to know what the armed men were doing there, since they could also have ended up arrested.

Some of the scenes from that day were captured on video, with one particularly poignant.  Outside Remzi Memetov’s home, one elderly lady cried:

As well as armed searches of Crimean Tatar homes, a mosque and a restaurant, Ilmi Umerov, the Deputy Head of the Crimean Tatar Mejlis [representative assembly] was detained and a search carried out of his home in Bakhchysarai.  He has been charged with ‘public calls to action aimed at violating Russia’s territorial integrity’ for saying what all western leaders repeat, that Russia must be forced to leave Crimea and Donbas.  Umerov has many medical problems which prevented the occupiers from holding him in prison, but has not stopped them risking his life through the use of punitive psychiatry.

The armed searches began from soon after Russia’s invasion and annexation of Crimea, and have continued, with only the pretext changing – and the level of repression which seems clearly aimed at terrorizing Crimean Tatars into submission or exile.