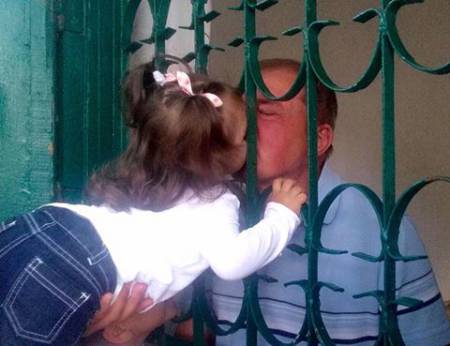 Ilmi Umerov was only allowed to greet his granddaughter through the grating (Photo: Ayshe Umerova)

Ilmi Umerov has now been confined in a psychiatric clinic for 10 days, and was even prevented from seeing his grandchildren except through the grating on Saturday.  His health continues to give real cause for concern, yet even the simple request to allow the 59-year-old who suffers, among other things, from diabetes, three meals a day, instead of the present two with a huge interval, has been ignored.  Ayshe Umerova reports that her father has had to increase the doses of all medication to keep his blood pressure under control.  This has, at least, enabled some degree of stability after the alarming deterioration in his health a week ago.

In a further worrying development, however, three people have now been placed in the same room as him.  In at least two cases, these are men who are suspected of theft, and it seems more than likely that they are there either to report on Umerov to the FSB, or for some kind of provocation.  Although supposedly in the clinic for an ‘assessment’, he has now been told that he will be held there for a minimum of 28 days.

Russia has, in short, reinstated punitive psychiatry, and is brazenly using it against the Deputy Head of the Crimean Tatar Mejlis [representative assembly] who is charged with saying what all western leaders have reiterated many times, namely that Russia must leave Crimea and Donbas.

Ukraine’s protests are always ignored, but Russia is now also disregarding formal statements of protest from the European Union, from Human Rights Watch and Freedom House.

Umerov’s original detention on May 12 came shortly after Russia criminalized the Mejlis, effectively for its consistent opposition to Russian occupation of Crimea.  He is now the second Mejlis leader to be effectively deprived of his freedom.  Akhtem Chiygoz has been in detention on insane charges over which Russia has no jurisdiction since January 2015.  The Head of the Mejlis Refat Chubarov and veteran Crimean Tatar leader Mustafa Dzhemiliev were banned from their homeland soon after Russia’s invasion.

In an interview to Hromadske Radio, Refat Chubarov gave a blistering assessment of Russia’s behaviour.

“With the illnesses which Ilmi Umerov suffers from – sugar diabetes, Parkinson’s Disease [and a heart condition] -  he cannot be put behind bars.  Even if the trial took place now on the illegal charges, they still could not decide to imprison him. They are very well-aware of that. They have therefore found other way of killing Ilmi.  They came up with the idea that a person in his right mind could not assert that Crimea is Ukrainian, not Russian.”

Umerov himself believes that the forced psychiatric assessment is aimed at declaring him mentally unfit as an attempt to discredit his views and the Mejlis.  The prosecution, for example, has attached the testimony of a doctor prepared to assert that Umerov’s neurological complaint could lead to psychiatric problems.  Where they got this doctor from is unclear, and he had not consulted with the doctor Umerov has been under for many years.

Chubarov reiterated what everybody who knows Umerov points to, namely the latter’s high ideals and moral calibre.  Chubarov noted that even when they were children, he and his brother posted leaflets calling on older Crimean Tatars to be worthy of their people and to fight for the right to return to their native land.

It was with Ukraine’s Independence that the Crimean Tatars were able to return to their native homeland which has now been invaded and occupied by Russia.

The formal document laying charges seriously reads that Umerov “with intent to carry out activities aimed at violating the territorial integrity of the Russian Federation, … deliberately and publicly called on an unlimited number of people to carry out actions aimed at returning the Republic of Crimea under Ukraine’s jurisdiction”.

Soviet punitive psychiatry was used against those who dared express views which the regime was unwilling to tolerate.  Now, however, it is being used against Ukrainian nationals in their homeland which Russia invaded – and for saying that Russia must leave.