How to Manufacture a War 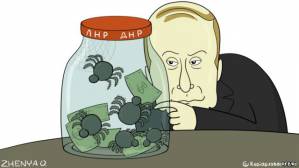 Before there was a war in the Donbas, there was the so-called Russian Spring.

There has long been scant doubt about the Kremlin’s deep involvement in -- and instigation of -- the war in Ukraine’s Donetsk and Luhansk oblasts that began in April 2014.

But the mass antigovernment demonstrations that erupted in Russophone cities in eastern and southern Ukraine in the months prior -- dubbed the Russian Spring by the pro-Kremlin media -- were always much more ambiguous.

In the hypercharged and chaotic environment after pro-Moscow President Viktor Yanukovych was ousted by the Euromaidan uprising in Kyiv, it was entirely plausible that the Russian Spring was an organic local grassroots phenomenon that the Kremlin merely exploited and piggybacked on.

But that seems a lot less plausible now.

Ukraine’s Prosecutor General’s Office this week released what it says are recordings of intercepted telephone conversations between Kremlin aide Sergei Glazyev and proxies in Ukraine, in which he gives them specific instructions about instigating unrest in Donetsk, Kharkiv, Zaporizhzhya, and Odesa as early as February 2014 -- before Russia had even annexed Crimea.

The intercepts suggest not only that the Russian Spring was instigated, organized, and financed by Moscow, but also that the Kremlin planned to annex large swaths of eastern Ukraine if the uprisings proved successful.

But in order to do this, they needed a "massive local insurgency,  Anton Shekhovtsov of the Vienna-based Institute of Human Studies noted.

It didn’t matter "whether those locals would be ideologically mobilized or bought, Moscow needed them to present a picture of a native uprising and justify the military invasion "in defence of the people, " Shekhovtsov wrote on Facebook.

As it turned out, Russia only managed to stir up sufficient unrest to intervene militarily in Donetsk and Luhansk. They failed in Kharkiv, Odesa, Zaporizhzhya, and elsewhere.

But it apparently wasn’t for a lack of trying.

In one intercept, dated February 28, 2014, Glazyev discussed financing uprisings in Kharkiv and Odesa with Konstantin Zatulin, a former State Duma deputy and now an official in Russian-annexed Crimea.

In another, dated March 1, he berates a man identified only as Anatoly Petrovich, about the lack of crowds on the streets of Zaporizhzhya and instructing him to organize people to take over the Oblast Council building.

“Why is Zaporizhzhya silent?" Glazyev said, adding that he has "direct orders from the top to get people on the streets in Ukraine."

Glazyev stressed that there could only be Russian armed support if the antigovernment protests were sufficiently large and there was the impression of local support. "If there’s no people, what kind of help can there be?" he says, adding that if enough people get on the streets Russia can intervene, as in Crimea.

Glazyev also instructed a man from Odesa, identified as Denis, that demonstrators must take over the Oblast Council, declare the authorities in Kyiv illegitimate, and make an appeal to Putin for help. He also appeared to suggest that Russia was prepared to intervene militarily.

Both Glazyev and Zatulin have denied the authenticity of the recordings. But they are consistent with a Kremlin strategy memo that was leaked last year to the liberal newspaper Novaya Gazeta.

The memo was reportedly drafted under the supervision of Kremlin-connected oligarch Konstantin Malofeyev and discussed by top officials in February 2014 -- at the height of the Euromaidan uprising and before Yanukovych was toppled.

The document advocated the incorporation of Crimea and large parts of eastern Ukraine, particularly Kharkiv Oblast, into Russia.

"Russia’s participation in the highly likely disintegration of the Ukrainian state will not only give new impetus to the Kremlin’s integration projects but will also enable our country to preserve, as mentioned earlier, control over the gas-transport system of Ukraine, " according to the document.

"At the same time, it will fundamentally change the geopolitical layout of central and eastern Europe, returning to Russia one of its main roles."

On one hand, this all just reinforces what many have suspected from the start.

But nevertheless, taken together, the Malofeyev strategy memo and the Glazyev telephone intercepts have gone a long way toward filling in the blanks in the historical record about the origins of the war in the Donbas.

"They imply that not only the so-called ’civil war’ in Ukraine was triggered by Russia, " writes Andreas Umland of the Institute for Euro-Atlantic Сooperation in Kyiv.

"The social conflict that preceded the use of guns had also already been secretly orchestrated, guided and financed from Moscow."

The above is discussed in Power Vertical Podcast with co-host Mark Galeotti and guests Andreas Umland and Anton Shekhovtsov http://rferl.org/content/podcast-the-tale-of-the-tape-power-vertical/27948424.html