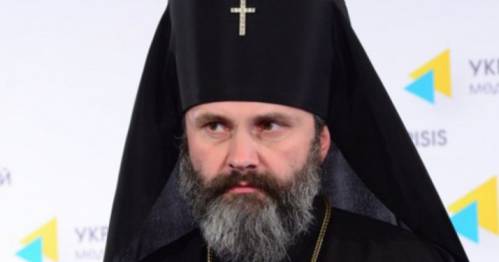 Archbishop Kliment, the Head of the Ukrainian Orthodox Church under the Kyiv Patriarchate in Crimea, has addressed an appeal to Russian Patriarch Kirill and the Russian Supreme Mufti Sheikh ul-Islam asking them to do all in their power to secure the release of Crimean political prisoners.

Beginning with the famous words from the Talmud: “Whoever saves one life, saves the entire world”, he explains that he has been forced to write to them by the “appalling use of Russia’s punitive system in the XXI century against a Man – God’s Creation.”

He explains that for him August 24 was a day which went beyond human endurance.  On that day he visited Ilmi Umerov, the Crimean Tatar Deputy Mejlis Head whom Russia as occupying power is holding against his will in a psychiatric clinic.  The Archbishop writes that all moral norms have been breached.

“Each tree shall be known by its fruits” (Luke 6:44).  If you have the fear of God in your heart, if everything that you say from the pulpit is not empty words, then do everything to secure the release of Umerov, Oleg Sentsov, Oleksandr Kolchenko & Oleksiy Chirniy; Oleksandr Kostenko; Akhtem Chiygoz and many other innocent Ukrainian citizens imprisoned for their convictions.

Archbishop Kliment, whose Church is also facing repression in Russian-occupied Crimea, visited Ilmi Umerov on Saturday.  He explained then that he had come to show support for a person who at one time helped him.

He stated in a television interview that Russia should be forced to leave Crimea and Donbas.

Umerov has serious health problems and even Russia cannot openly imprison him.  Instead it has renewed another Soviet practice, that of punitive psychiatry. There has been international outcry over this, and Russia is now saying – via its puppets in occupied Crimea – that Umerov will be released from the clinic on around September 8 (more information here)

There are no such assurances about the other political prisoners.

In December 2015, Archbishop Kliment made an impassioned response to Bulgarian Patriarch Neofit’s demand that Ukrainian President Petro Poroshenko “defend Ukraine’s Orthodox believers from persecution”.   Why was the Patriarch silent, he asks, when Orthodox churches of the Kyiv Patriarchate were seized in Crimea in 2014, “when they abducted and tortured my parishioners Andrei Shchekun, Anatoly Kovalsky, Oleg Sentsov, Oleksandr Kolchenko and Oleksandr Kostenko?”

Archbishop Kliment wrote of the constant persecution that believers under the Kyiv Patriarchate in Crimea were facing.  Since then the Church has been ordered to vacate the Cathedral of Vladimir and Olga in Simferopol.

“I therefore ask you to turn to the President of Russia Vladimir Putin and the Moscow Patriarch Kirill to defend believers of the Crimean eparchy of the UOC KP from persecution and to help them to retain their own church property”, he wrote, ending with the following words:

“I would also ask you to speak out in defence of my parishioners Oleg Sentsov, Oleksandr Kolchenko, Gennady Afanasyev, Oleksiy Chirniy; Oleksandr Kostenko, innocent men convicted under Russian laws only because they are Ukrainians. I am willing to provide you with the necessary explanation on all facts and events and look forward to your reply.  With love of Christ, Kliment”.

The Ukrainian Orthodox Church came under attack more or less immediately after Russia’s invasion in February 2014.  So too did the Crimean Tatars, and the solidarity and mutual support were evident from the beginning.  Back in early 2014, for example, when it looked as though Orthodox believers might be stripped of their churches, the Crimean Tatar Mejlis offered to provide their mosques for the Orthodox believers’ worship.