Beslan: 11 years without answersCourt in Strasbourg accepts case against Russia over BeslanBeslan: Russia finally forced to answer before the European Court of Human RightsMothers of Beslan seek answers through StrasbourgRemember BeslanTruth about Beslan blockedBeslanBeslan: Eight years on, still no answersRussia found in violation of the right to life over Beslan School attack14 years of pain and of lies about the siege and storming of School No. 1 in BeslanBeslan: In Memory and MourningBeslan Six years on100 lessons on BeslanRemembering BeslanOn the Fifth anniversary of BeslanFamilies of BeslanBeslan: four years and no answersCriminal investigation initiated against members of “Voice of Beslan”“Voice of Beslan” will not be silenced«Voice of Beslan: Only the truth»
• Topics / News from the CIS countries 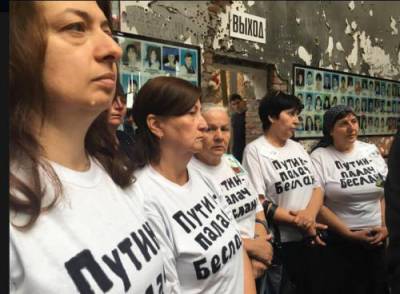 Five mothers of children killed during the storming of School No. 1 in Beslan on September 3, 2004 have been sentenced to community work or fined for a silent protest.  On the twelfth anniversary of the terrorist siege which ended with the deaths of their children, five of the mothers took off their cardigans as the remembrance service began.  They were all wearing T-Shirts with the words: “Putin is the Executioner of Beslan’ [Путин – палач Беслана].  334 children and adults lost their lives, most during the storming of the school hall.  There has never been a proper investigation, including into the actions of the federal forces which resulted in most of the deaths.  The only two journalists who did not turn their cameras away from the women’s silent protest were taken away and held for two hours before being released.  Typically, even the few Russian media prepared to report the women’s protest do not tell the whole truth.  Photos blot out the words accusing Russian President Vladimir Putin, or call them only “criticism of the President”.

An attempt was made to detain the women then, but they began shouting and the FSB backed off.

They were roughly seized when they left the school grounds.  They told Novaya Gazeta that they had been surrounded by a large number of officers, many in plain clothes, and pushed into a car.  Svetlana Margiyeva was hit on the back so hard that she vomited, and at least two of the women have serious bruising.

They were held at the police station for 5 hours, and charged under Articles 19.3 and 20.2 of the Code of Administrative Offences, for supposedly ‘not obeying a police officer’ and ‘violating the procedure for holding meetings’.

The police report read out in court says: “A police swift response special forces unit was called in to stop unlawful actions. Physical force was applied in accordance with the Law on the Police”.

Emma Betrozova, lost her husband Ruslan and sons Alan who was 16, and 14-year-old Aslan during the storming of the school.  She told the court:

“I am not a criminal to be taken away in a police car from the place of the terrorist attack in which my family were killed. This is a place where I did not think I needed to ask to stand. In that place I lost what was dearest to me on this earth. To behave in such a way with mothers whose children were killed in the sports hall is the height of cynicism”.

Svetlana Margiyeva, whose daughter Elvira died in her arms, was reported to have declared a hunger strike. 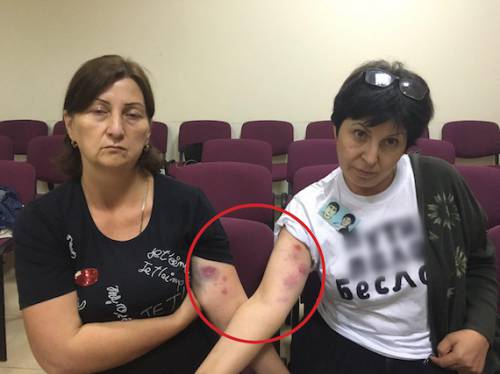 Zhanna Tsirikhova and Ella Kesayeva - Even the T-shirt is blurred, to avoid showing the words about Vladimir Putin being the executioner of Beslan

Emma Betrozova, whose 9-year-old son Aslan died in the storming, has a four-year-old son who is unwell.  He needed to be given an injection with antibiotics at 14.00 but she was not allowed to leave.

The other two women were Zhanna Tsirikhova, whose 8-year-old daughter Yelizaveta was killed, and Ella Kesareva whose daughter Zarina was among the hostages.

Novaya Gazeta reports that the hearing finally ended at around 3 a.m. on Friday morning.  Three women: Svetlana Margiyeva, Ella Kesayeva and Emilia Bzarova asked for an alternative sentence since they could not pay fines, and were sentenced to 20 hours community work  Emma Betrozova and Zhanna Tsirikhova did not realize they needed to apply for an alternative sentence, and were fined 20 thousand roubles.   Zemfira Tsirikhova was not wearing one of the T-shirts, but was sentenced to 20 hours’ labour for being next to one of the other women and for “making comments”.

The women were against their will for 14.5 hours.  They plan to appeal against the rulings.

The siege of the school in Beslan began during the ‘First Bell’ ceremony on September 1.  This is an important day for most families, and the armed terrorists took well over a thousand children, teachers, parents and grandparents hostage.  Moscow systematically lied about the terrorists, their supposed refusal to negotiate and about the number of hostages, claiming there to be around 300.

There has never been a proper investigation, for example, into how the terrorists managed to hide their arms in the school, and why the Russian federal authorities began storming a school sports hall with the use of tanks and heavy artillery. This is also not the first time that the mothers of Beslan have faced harassment for demanding to know why their children were killed.

In July 2015, the European Court of Human Rights found most of the applications brought by victims or relatives regarding violations by Russia of the right to life, both through actions and failure to investigate, admissible.  It is extremely likely that Russia will be found to have been in violation of the European Convention, however the judgement is still a long way off.

It is easy to understand the frustration the mothers of victims feel if you look at the questions that the Court in Strasbourg will be considering.

the question of prevention.  The applications maintain that the Russian authorities had sufficient information, but did nothing to prevent the attack;

the Russian investigation has not established all cases involving indiscriminate force (flame-throwers, grenades, tanks) and has not resulted in those responsible for deaths caused by such weapons being identified and punished;