Russian fined for reposting that the USSR & Nazi Germany invaded PolandRussia says Poland, not USSR, was Hitler’s Ally and Responsible for HolocaustKremlin-funded Sputnik Int. claims West criticizes Stalin to weaken Russia & its leadershipKremlin’s proxies purge memory of victims of Holodomor and political repressionRussia’s ’new approach’ to Stalin and extended secrecy about his victimsStalin Museum: Putin’s Russia Immortalizes Bloody DictatorAnger and Protest over Stalin Monument in YaltaPortrait of Stalin appears in Russian-occupied CrimeaStalingrad as latest step in re-glorification of tyrantNeo-Nazis in Moscow’s ServicePro-Russian separatists start their own anti-Semitic TV channelPro-Russian, anti-Roma, anti-Semitic and hunting out Ukrainian speakersThe Donetsk anti-Semitic leaflets – what should not be overlookedEast Ukraine crisis and the ’fascist’ matrixRussia continues its false narrative as defender of oppressed minorities in UkraineRussian propaganda claims Jewish organizations supporting Maidan are bringing on "second Holocaust"The Crimean referendum’s neo-Nazi observersPutin’s Neo-Nazi HelpersChief Rabbi and others dismiss Putin’s “anti-Semitic extremist” claimsRussian propaganda must be challenged
• Topics / News from the CIS countries 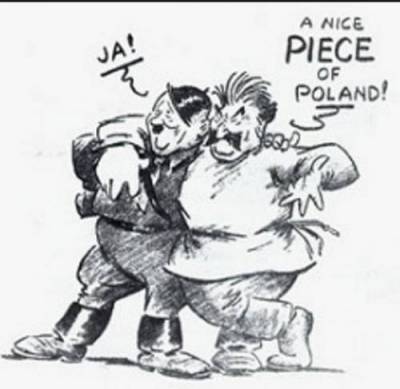 Russia’s Supreme Court has upheld the conviction of Perm blogger Vladimir Luzgin for reposting a text which states that both Nazi Germany and the Soviet Union invaded Poland in 1939.  The Supreme Court’s ruling came on September 1, 2016, the 77th anniversary of Hitler’s invasion of Poland, 17 days before the anniversary of the Soviet invasion from the east.

Henry Reznik, the well-known lawyer who was representing Luzgin, commented that the Supreme Court has discredited itself through this ruling and promised to appeal further.  He added that an application to the European Court of Human Rights was simply demanded.

As reported here, 37-year-old Vladimir Luzgin was convicted in July this year by the Perm District Court and fined 200 thousand roubles.  The charge was under Article 354.1 of Russia’s criminal code (‘rehabilitation of Nazism’) and concerned Luzgin’s repost of a text on his VKontakte social network page entitled ’15 facts about Bandera supporters, or what the Kremlin is silent about’.

It is probably no accident that the ‘offending text’ should be Ukrainian, and fairly nationalist, however it was specifically over the following paragraph in the repost that the criminal proceedings against Luzgin were initiated:

Russia’s Supreme Court has now agreed that this paragraph constitutes “the public denial of the Nuremberg Trials and circulation of false information about the activities of the USSR during the years of the Second World War”.

It is hard to know what is most shocking in all of this. A prime contender must be Alexander Vertinsky, dean of the History Faculty of the Perm Humanitarian-Pedagogical University.  He proved willing to appear for the prosecution and claim that the paragraph really did contain “statements that do not correspond with the position accepted at international level”.

There are also two Russian courts willing to agree that since the Nuremberg Trials did not mention the Soviet invasion,  the information was ‘knowingly false’.  With the Soviet Union as one of the victors exerting considerable influence at Nuremberg, it was highly unlikely that Soviet collaboration with the Nazis and its invasion would get a mention.

The rulings are extraordinarily cynical.  Whatever was said at Nuremberg, any genuine historian will confirm that the Soviet Union invaded what was then Poland on September 17, 1939.

To deny this is absurd when the Molotov-Ribbentrop Pact and its secret protocols which carved up Poland between the Soviet Union and Germany have long been in the public domain, and can be read about in any history book.

Perhaps the most chilling aspect of this is that the Perm ‘historian’, the courts, the prosecutor are doubtless well aware of the historical facts.  Luzgin has more than likely been prosecuted for revealing inconvenient facts, and the Russian prosecutor, courts, as well as a historian have all proven complicit in this cynical travesty.

The bill outlawing something dubbed ‘rehabilitation of Nazism’ has been in force since May 2014.  It claims to be aimed at opposing the glorification of Nazism and distortion of historical memory.  The renowned Sova Centre disagrees and believes its aim is to prohibit historical discussion.  It’s application in this case has flouted provable historical fact.

In parallel with its military aggression against Ukraine, the Kremlin has been trying to reinstate the Soviet narrative about the Second World War in which details of the first almost 2 years during which the Soviet Union was Hitler’s ally are blurred, and the collaboration justified.

At a press conference with German Chancellor Angela Merkel on May 10, 2015, Putin defended the Molotov-Ribbentrop Pact, claiming that the Soviet Union was being left to face Hitler’s Germany by itself.   Russia’s culture minister Vladimir Medinsky called the pact a "colossal achievement of Stalin’s diplomacy."

Then on September 20, 2015, Russia’s ambassador to Venezuela Vladimir Zayemsky claimed that the Soviet Union did not invade Poland on Sept 17, 1939 and that it was in fact Poland, not the USSR, that collaborated with Nazi Germany.  He wrote that “the alleged invasion by Soviet forces of Poland in 1939 is a lie” and went on to claim that although Poland was the first victim of WWII, it tried to be “Hitler’s faithful ally” in the period before the War.  “It was Warsaw’s pro-fascist stand which made a treaty of cooperation between the USSR, Czechoslovakia and France impossible”, he alleged.  The same offensive attempts to rewrite history were presented by Russia’s ambassador to Poland Sergey Andreyev a few days later, speaking on Polish television.

Andreyev claimed that the Soviet invasion on September 17 had not been an act of aggression, but a defensive act to ensure the security of the USSR.

This is exactly the narrative that the Kremlin has been pushing to try to justify Russia’s invasion and annexation of Crimea.