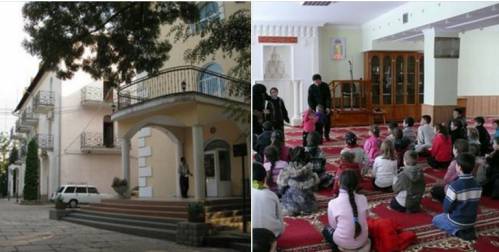 For the third time since Russia’s invasion of Crimea, an armed ‘search’ has been carried out of the Mosque / Muslim Cultural Centre Sozidanye [Creation] in Simferopol.  As on previous occasions, the armed men in masks were on the hunt for ‘prohibited literature’, and, conveniently, ‘found’ it – this time with insulting disregard for Muslim practice, near a toilet.

Said Ismagilov, Mufti of the Spiritual Directorate of Muslims of Ukraine reported that masked and armed OMON riot police had turned up at the Mosque on Mokrousov St at around midday on September 5.  Muslim Devrishev, Head of the Centre, has since informed Krym.Realii, that there were also people from the Crimean prosecutor’s office and from Russia’s effective censor, Roskomnadzor.   They were there for a few hours, until around 7 p.m.

This is not the first visitation in search of ‘extremist literature’.  After the first alleged find of prohibited books and resulting administrative proceedings, the Imam was extremely careful and aware of possible provocation. He was therefore adamant that during the second such armed intrusion on January 28, 2016, that the officers could find nothing until they themselves brought it.

They claimed to have found two books on Russia’s huge list of ‘prohibited material’, one a Muslim prayer book entitled ‘Fortress of a Muslim’.

At the time Said Ismagilov expressed concern that plans might be afoot to pin something on the mosque’s imam or the Islamic Cultural Centre.

The Imam has since then checked every corner of the Mosque for planted material several times a day.  This time the armed OMON officers came up with something else, indicating either extraordinary ignorance or the intention to demonstrate their impunity.  The bag with two items on Russia’s huge list of prohibited items were this time in the courtyard, next to the toilet.

The Mufti points out that Muslims would not take any books with them to the toilet, and certainly not religious material.  There is a strict ban on bringing religious literature to any place of ablutions or keeping it in close vicinity of such areas.

This time criminal proceedings are planned, with the courts under Russian occupation having given no grounds at all to expect a fair consideration of the evidence.

The Muslim Cultural Centre is well-known for its charitable work among orphans and poorer families, and there are several thousand regular worshippers, mainly Crimean Tatars.

Crimean Tatars have been a particular target for repression, and there are constant attempts to try to present them as ‘terrorists’ and ‘extremists’.  This new offensive is taking place as the verdict is due in the trial of four Crimean Muslims on fabricated charges of involvement in the Hizb ut-Tahrir movement which Russia, for reasons it has never explained, calls ‘terrorist’, although the organization is legal in Ukraine and most other countries. The four have been recognized as political prisoners by the renowned Memorial Human Rights Centre.  The appeal is also due to be heard at the end of September against Russia’s criminalization as ‘extremist’ of the Crimean Tatar Mejlis, or representative assembly of the main indigenous people of Crimea.

The other reason for such heavy-handed measures is doubtless just straight intimidation.  On May 6 this year, armed and masked men cordoned off a mosque as people were leaving after Friday prayers.  Several dozen men tried to detain about 100 Crimean Tatars and take them away in police vans for a supposed ‘check.  There was outrage from those present, and eventually the armed ‘officers’ removed the cordon but ordered that all the men turn up at the police station.

No pretext on that occasion was even attempted.