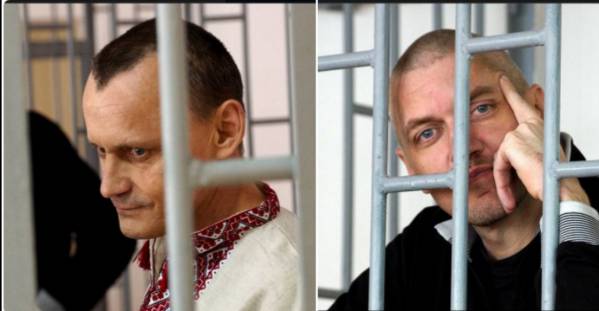 Details have emerged which cast some light on how a jury in Chechnya could have found two Ukrainians guilty of crimes allegedly committed while fighting against Russian federal forces in Chechnya, despite overwhelming evidence that neither man had ever set foot in the place and that most of the alleged crimes had never happened.  The defence lawyers representing Mykola Karpyuk and Stanislav Klykh believe that the judge, Vakhit Ismailov, was directly implicated in putting pressure on jury members.

The defence recently completed the appeal against the 22.5 sentence passed on Karpyuk and 20-year sentence against Klykh.  In it, they point out that the judge had ordered police ‘protection’ for the jury members a week before their verdict was due.  The spokesperson for the jury had not been aware of any attempts to put pressure on them.  The judge claimed that the measure was prompted by ‘anonymous threats’ but provided no details.

The defence has since been able to see two anonymous letters claimed to have been the basis for the decision.  They note that the stamps indicate that they were sent from the post office in the centre of Grozny which has CCTV cameras.  The judge could have easily ascertained who was behind them, yet no report was made to the police.  The decision taken regarding supposed state protection did not give a single specific name.

The defence lawyers – Dokka Itslayev and Marina Dubrovina – are convinced that the decision was in fact intended as a threat to the jury members should they acquit the men.

This would not have been the first time that Russia was making use of the specific conditions in Chechnya under Ramzin Kadyrov (see: Russia uses Kadyrov’s thugs against defence witnesses in Ukrainian political trial ).

The trial was run with a very obvious bias against the defendants which the jury members would have seen very clearly.

The appeal was sent to Russia’s Supreme Court on September 6.  The cases of all other Ukrainian political prisoners whom Russia is holding illegally make it difficult to believe that the court will genuinely examine the clear evidence of a gross miscarriage of justice.

On May 19 the jury in Grozny found both Karpyuk and Klykh guilty of having been members of the Ukrainian nationalist organization UNA-UNSO and having, at the end of 1994 and beginning of 1995 been part of an armed formation which fought against Russian federal forces. They were supposed to have killed at least 30 Russian soldiers.  The renowned Memorial Human Rights Centre had already declared both men political prisoners and Zoya Svetova, a prominent rights activist, called the case “one of the most insane and monstrously falsified prosecutions initiated against Ukrainian nationals since the annexation of Crimea”.  Memorial had provided a detailed analysis in four parts which demolished the entire indictment.  Irrefutable evidence had also been demonstrated that Klykh had been taking exams in Kyiv at the time, while Karpyuk was caring for his dying mother.

Mykola Karpyuk was effectively abducted after being tricked into going to Russia in March 2014.  Nothing was heard from him until shortly before the ‘trial’ in October 2015.  Stanislav Klykh was seized from a hotel in the Oryol oblast where he had gone to meet a woman he believed he had befriended.  He was held incommunicado for 11 months.

During the period where they were held incommunicado, they had access only to state-appointed ‘lawyers’ there only to tell them to ‘confess’ and to sign documents.

As soon as the men were allowed to see real lawyers, they retracted all testimony, all ‘confessions’ and provided harrowing accounts of the torture they had been subjected to.

As well as physical scars, there are medical documents in Klykh’s case which provide proof of his torture allegations.  There is also, unfortunately, his extremely disturbed behaviour over recent months which may well be explained by the psychotropic drugs he has asserted were forcibly administered.  Instead of recognized his disturbed state, the judge initiated further criminal proceedings, which are ongoing, for alleged ‘contempt of court’.

The allegations against the men (presented as proven crimes) were first reported by Alexander Bastrykin, the Head of Russia’s Investigative Committee and then by other pro-Kremlin media, such as the Russian propaganda channel Life News

Bastrykin claimed that “the majority of Ukrainian far-right nationalist radicals who took part in the anti-constitutional coup in Ukraine in February 2014, at one stage fought in Chechnya on the side of illegal gangs …”   He then asserted that Arseny Yatsenyuk, who was then Ukraine’s Prime Minister, had been one of them.  More, much more.  Yatsenyuk had supposed tortured and shot captured Russian soldiers in Grozny on Jan 7, 1995 (see: The Chilling side to Russia’s claims about Yatsenyuk as Chechnya fighter).

The respected Memorial Human Rights Centre subjected the indictment to analysis and found it in total conflict with the facts.

Of the 30 Russian soldiers whom Russia claimed that Karpyuk and Klykh had killed, 18 had died in another place altogether, and a further eleven had not been killed by gunfire, as the prosecution claims.   Only one man had died, as per the prosecution’s story, of gunfire, but not from the type of gun that the investigators claim was used.