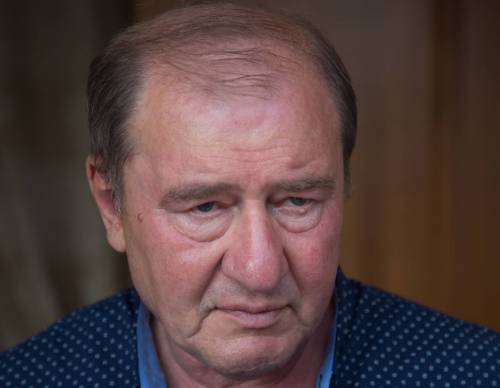 Crimean Tatar leader Ilmi Umerov was released on September 7, after being held for three weeks against his will in a psychiatric clinic.  What Russia was hoping to achieve by risking Umerov’s life and resorting to punitive psychiatry remains unclear.  Presumably not the actual result, namely to highlight the Soviet-style repression unleashed since Russia’s invasion and annexation of Crimea.

It was the charge that could not be more insane.  Umerov was initially detained on May 12 and charged in connection with an interview given to the Crimean Tatar ATR TV on March 19, 2016 in Kyiv.  In that interview he stated that Russia must be made to leave Crimea and Donbas, expressing the same position as that taken by all democratic countries. Russia has, quite incredibly, claimed that the interview contained “public calls to action aimed at violating Russia’s territorial integrity’. This is under Article 280.1, a new article introduced within months of Russia’s invasion and annexation of Crimea.

Russia was unable to imprison the 59-year-old Umerov because of his serious illnesses.  Instead it effectively incarcerated him in a clinic where the conditions were also dangerous for his health.

He told Krym.realii that the psychiatric assessment was aimed at exerting influence on him.

It failed, and that was also entirely to be predicted.

He has no intention of leaving Crimea, which is his homeland and is categorically not changing his position.  This was expressed very clearly at one of the court hearings:

“I did not call for the violation of the state’s integrity. I called for the strengthening of sanctions against Russia to force it to return Crimea to Ukraine. In fact, I want to re-establish the territorial integrity of both Ukraine and Russia”.

“I will remain in Crimea. I do not recognize the results of the ‘referendum’, nor all that was done, referring to it. If I had wanted to run away from so-called punishment for my views, for my position, I could have done that a long time ago”.

Through its treatment of Ilmi Umerov, the international community finally reacted, demanding his release and the termination of preposterous charges.

Umerov stresses that there were no grounds, given the charges against him, for forcing him to undergo a psychiatric assessment.  He was held in bad conditions, with the only ‘tests’ being some talks on subjects like where he was born, where he studied and worked.

If they were to come up with a mentally unfit diagnosis, they would be flying in the face of all evidence, and only focusing attention on the real reason that Russia is persecuting him, i.e. his rejection of Russian occupation of his homeland.

Russia did not react to international pressure and there is nothing to suggest that it will terminate its persecution of Umerov.  His discharge coincided with the conviction and sentencing of four Crimean Tatars on charges which are also surreal.

The number of Crimean political prisoners is high and on the increase. So too is the use of other methods, including forced disappearances.  There is mass surveillance of all those whom Russia sees as ‘dissident’.  If the FSB has not found the men who can be seen on CCTV footage abducting Crimean Tatar activist Ervin Ibragimov on May 24, it is more than likely because they were complicit.

Umerov was quite right – sanctions against Russia need to be strengthened, along with all forms of pressure.