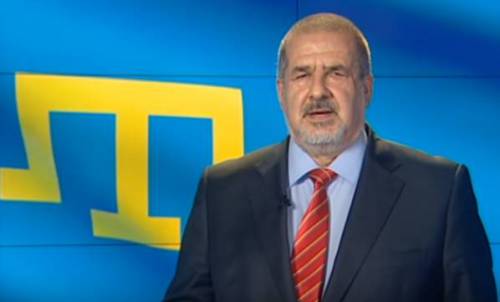 Crimean Tatar Mejlis leader Refat Chubarov has addressed all Crimeans calling on them to boycott the Russian parliamentary elections which Russia is insisting on holding in annexed Crimea.  His appeal coincides with a Ukrainian parliamentary resolution asking the international community to join Ukraine in not recognizing the elections in Crimea.

Dmitry Peskov, Russian President Vladimir Putin’s press secretary, has claimed that any refusal to recognize the elections will be of no consequence.  This, however, is clearly not the message on the ground.  Lists are being drawn up by the occupation administrations in Crimea of all public sector workers and even the staff of private firms, with them being threatened with dismissal or other penalties if they don’t turn up at the polling booths on September 18.  There is also at least one example  circulating of a similar order to attend campaigning events in support of the ruling United Russia party.

It is clear that Russia is eager to create the semblance of legitimacy around elections that can have none since they are taking place in a part of Ukraine which Russia is illegally occupying.

In his address Chubarov called on Crimeans to boycott all stages of the election process.  He stressed that Russia is well-aware of the legal meaninglessness of these elections.  It is hoping, however, by running them as though normal, to somehow validate the pseudo-referendum held at gunpoint soon after Russian soldiers invaded Crimea in Feb-March 2014.

Chubarov stresses that the methods now being applied to coerce people into attending are illegal even according to Russian legislation.

Boycotting the September 18 elections is a legal and non-violent method of opposing the Russian occupiers.  Chubarov calls it an act worthy of all honest people, and a way showing support for political prisoners and their families.

Chubarov is one of the Ukrainian MPs who endorsed an appeal adopted on September 8 to the parliaments of other countries, parliamentary assemblies and international organizations.

They are asked to refrain from taking part in observing the illegal parliamentary elections in Crimea, and to not under any circumstances recognize the results.  They are requested to issue official statements regarding the illegitimacy of any recognition of the elections on occupied territory.

The Verkhovna Rada warns any foreign nationals who visit Crimea to take part in observing the event that criminal proceedings will be brought against them for illegally crossing into occupied territory.

Russia has long used ‘observers’ whose unqualified and normally effusive praise can be relied upon for all pseudo-referendums, etc.  Russia has for the last two and a half years pushed the narrative that Crimeans themselves decided to hold a referendum at which they decided ‘to join’ Russia.  Those in the West who repeat this line choose to ignore the heavy presence of Russian soldiers without insignia and armed and extremely aggressive paramilitaries, the lack of any real choice on the ballot paper as well as the fact that any such referendum needed to be held in accordance with Ukraine’s Constitution and was not.

The event was boycotted by most Crimean Tatars and many other Ukrainians opposed to Russia’s occupation as it was clear that this was no real referendum.  The Crimean Tatar Mejlis or representative assembly has since then faced serious repression and is now banned.  Even Russia’s own Human Rights Council later issued a report which clearly indicated that the alleged turnout and overwhelming support for annexation were largely fabricated.  The results they found suggested much less than 50% throughout Crimea.

None of this was, of course, noticed by the ‘observers’. Some of these were financed by the Russian-based Eurasian Observatory for Democracy and Elections headed by Luc Michel and Jean-Pierre Vandersmissen, both supporters of the neo-Nazi Jean-François Thiriart and members of the extreme right Parti Communautaire National-Européen (PCN-NCP).  The list of supposedly 135 observers included representatives of the far-right parties Jobbik (Hungary); Ataka (Bulgaria); Vlaams Belang (Belgium); Freedom Party (Austria) and others. There were also members of neo-Stalinist or extreme left-wing parties, including Germany’s Die Linke.  Two Bundestag deputies from this German party have since twice visited militant-controlled Donbas, providing propaganda stunts for the so-called ‘Donetsk people’s republic’.   Many of the same ‘observers’ have since taken part in rubberstamping even more grotesque imitations of elections in Kremlin-backed militant-controlled Donbas.

There have been constant attempts to present that event as a valid expression of Crimean voters’ wishes.  There were lies from the outset, and attempts to pretend that the OSCE was present.  The far-right Luc Michel was, for example, presented by pro-Kremlin TV Rossiya 24 as from the OSCE.

There are no grounds for expecting anything seriously resembling fair elections anywhere in the Russian Federation, and in Russian-occupied Crimea they are, by definition, impossible and to be given a very wide berth.