Crimean prisoner slashes his throat in protest at forced Russian citizenshipCrimean prisoners illegally taken to Russia and ‘retried’Crimean occupation regime changes prisoners’ sentencesDesperate plea from Crimean prisoner who attempted suicide rather than be taken to RussiaRussian atrocities at Bucha may be nothing to those that will be found when Kherson is liberated Dead souls and infants ‘voted’ in Russia’s sham ‘referendums’ on annexing Ukrainian territoryRussian occupation means 14-year sentences for being Ukrainian and refusing to ‘confess’ to insane charges Silence abets Russia in torturing and risking the lives of Ukrainian hostages and POWs in occupied DonbasIzium Mass Graves: Tortured victims with bound hands and entire families killed by the Russian invaders Valentin Vyhivsky: Eight years of torture in Russian captivity for being Ukrainian Russian invaders remove Ukrainian language and literature from schools Crimean Tatar political prisoner sentenced to 11 years for 'kitchen conversation' about religion and politics Fascism is here in Russia. Anti-war activities in Russia, 15-22 AugustNew Russian conveyor belt of repression targets Crimean Tatars, other Ukrainians abducted from mainland Ukraine Admission of guilt: Russia blocks international investigation of Olenivka mass killing of Ukrainian POWs Russia wants 64-year-old Crimean Tatar to die in prison for refusing to collaborate in occupied Crimea Russian invaders plan ‘trial’ of abducted Ukrainian volunteer on charge of ‘international terrorism’ Russia effectively admits to using Zaporizhzhia nuclear power plant as a military base New armed searches and arrests in Russian-occupied Crimea for reading the Bible Russia seeks 15-17 sentences against Crimean Tatar civic journalists who reported repression in occupied Crimea
• Topics / The right to life
• Topics / The right to health care 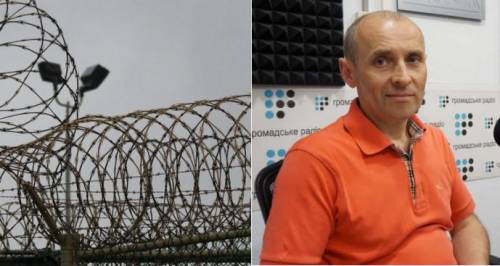 One of the many Ukrainian prisoners forcibly moved to Russia after the latter invaded and occupied Crimea has died in a Russian prison, with the Russian authorities having ignored even the European Court of Human Rights.

The man had been held in a Russian prison for 2 years without receiving the medical care he required for hepatitis and tuberculosis. According to Roman Martynovsky, a lawyer from the Regional Centre for Human Rights, an application had been made at his request to the European Court of Human Rights to take urgent measures in accordance with Rule 39 of the Regulations.  The Court demanded information from Russia on the medical care the man was receiving, etc.

He was clearly receiving none and has died, with Russia yet again flouting its obligation to comply with any requests from the Court in Strasbourg.  It is similarly ignoring the Court’s demand for information about the conditions in which Yevhen Panov is being held.  He has been held by the Russian FSB in Crimea since early August and is being prevented from seeing a proper lawyer.  There are very serious grounds in his case for believing that he was subjected to torture.

Martynovsky has learned that other prisoners in the same prison colony have tried to protest over the conditions, with most specifically complaining about the lack of proper medical treatment.  Prison administrations in Russia generally refuse to allow prisoners to have their medical records with them, claiming that this is linked to confidentiality issues.

It can, in fact, prove a question of life or death since without the records, a prisoner cannot prove what illnesses he is suffering from.

There have been numerous reports of Crimean prisoners sentenced under Ukrainian law having Russian citizenship foisted on them and being illegally ‘retried’ under Russian law.  Elvis Asanov, a life prisoner, registered his protest at such attempts on May 11 this year by slashing his throat directly in the courtroom. He thankfully survived.

Human rights activists reported at the time that there were over a thousand Crimean prisoners who are being forced in this way to take Russian citizenship.  This is entirely illegal and also means that many of them are not freed according to Ukrainian amnesties to which they are entitled.

They made public a poignant letter written by some of the Ukrainian prisoners who wrote:

“We are the same Ukrainian citizens as all other citizens of our country.  We love and honour our motherland, but often can’t understand why our motherland is so unprincipled in its attitude to our fate. Each of us has a family in Ukraine, children, parents whom we aren’t able to contact and who suffer from that, perhaps even more than we do.

…  We want and hope to return home, to our loved ones. We want to work for the good of our country, yet we do not see any wish from our country to help us. Over the last two years, many of our citizens have been made Russian citizens, and are already serving sentences in Russia as Russian nationals.”

Martynovsky has stressed that there are men and women prisoners, including some who are underage.  He adds that this is a clear breach of the Geneva Conventions and can be deemed a war crime.   The problem is proving it since Russia makes it impossible to contact the people.  They are working on it, with the priority given to underage prisoners, as well as those with serious illnesses or psychological disorders.

It is important to remember that many of those held in detention when Russia invaded Ukraine had not been convicted of any crime.

Back in August, Martynovsky said that he could not see Russia being deterred by the threat of liability for war crimes.  Attention was therefore needed from international organizations.  He expressed surprise that Amnesty International, which does have an office in Ukraine, was silent.

Russia has also tried to foist its citizenship on Ukrainians imprisoned on politically motivated charges.  This was particularly flagrant in the case of Crimean filmmaker Oleg Sentsov and civic activist Oleksandr Kolchenko.  An application on Kolchenko’s behalf is with the European Court of Human Rights over the attempt to claim that he had ‘automatically’ become a Russian citizenship.  Sentsov has made his contempt for such efforts clear on many occasions, most memorably here: