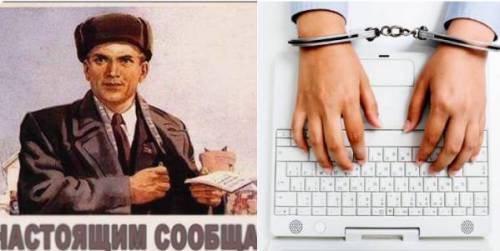 Political prisoners, punitive psychiatry, censorship and a Stalinist-era culture of denunciations, this is what Russia brought with its invasion and annexation of Crimea.  Fear of being reported to the occupation authorities by neighbours or colleagues had long been a reality.  Now one Yalta lawyer has been ‘denounced’ by local council members, including somebody he had considered a friend for 20 years.

Yury Formus has made public the chilling letter which local council members sent to the head of Russia’s FSB, Alexander Bortnikov.

For Yury Formus, one of the most painful things is that he has known many of the 13 signatories for 20 years, and one he regarded as a friend.

Formus learned of the denunciation, which is dated July 4, when summoned by the police for questioning.  He refused to testify against himself.

It is typical that the Council members’ decision to denounce Formus for his opposition to Russia’s annexation came after a legitimate call by the lawyer for the chairperson of the Council, Valery Kosarev to be dismissed.

He explained to Krym.Realii that he had been representing a client in defending his plot of land which borders on that owned by Kosarev.  Formus won all court suits, with the court agreeing that Kosarev’s actions were unlawful.

It was after this that Formus formally approached each of the Council members, informing them of the conflict of interests in Kosarev’s continued position in the Council.  The response was the denunciation – for his views on Russia’s annexation of Crimea.

As well as being upset over such behaviour from a supposed friend, Formus is also disgusted, and is planning to demand disciplinary proceedings against the councillors for breaching regulations on responding to appeals from the public.

For the moment, only the police have questioned him, however Olha Skripnik from the Crimean Human Rights Group says that he could also face such ‘scrutiny’ from either the FSB or the so-called Centre for Countering Extremism.

Shortly afterwards Zair Smedlyaev, Head of the Qurultay, or Crimean Tatar Congress Central Election Commission, reported that a Crimean Tatar Nazim Memetov has been subjected to countless checks from energy companies and the de facto police following a similar denunciation from a neighbour.  The individual accused Memetov of incorrect use of electricity, and claimed him to be a member of the Crimean Tatar Mejlis, the self-governing body which Russia has criminalized essentially for its opposition to Russian occupation. In fact, Memetov is not, and has never been a member of the Mejlis.

Smedlyaev suspects that the denunciation was written on orders ‘from above’ as an ominous warning to other Crimean Tatars.

The culture of writing denunciations has become entrenched in Russia, with many of the cases of political persecution, for example,  the imprisonment of Maxim Kormelitsky from the Novosibirsk region, directly initiated after denunciations.  Kormelitsky was jailed this year for 15 months over literally one picture with a caption on his VKontakte social network page.  Moscow has used another denunciation as excuse for declaring the renowned Levada Centre a ‘foreign agent’.

Although this collective denunciation stands out for having been written by deputies of a council, personal denunciations have become common in Crimea under Russian occupation, and are encouraged by officials loyal to the occupation regime.

Natalya Vashchenko, a Ukrainian volunteer was forced to leave Crimea rapidly, after being taken away for questioning by the Russian FSB in May 2016.  She had been visiting her mother in Kerch, and was clearly ‘reported’ by a neighbour.  She later advised any Ukrainians travelling to Russian-occupied Crimea to be extremely careful, to avoid any comments on social networks or unnecessary conversations.

The Crimean Human Rights Group suggests that the prosecution reported here of Larisa Kitaiska, a former Maidan activist living in Kyiv, but with a flat in Yalta, may have also been after denunciations.

The rights activists know of cases of denunciations in educational institutions over ‘pro-Ukrainian views’ or opinions expressed on Facebook.

They believe the number may be much higher, with some of the targets trying to keep quiet about them, fearing more trouble otherwise.

The Crimean Human Rights Group advise people to not panic, but to be careful if they find themselves ‘denounced’.  They should under no circumstances agree to go to the police without the appropriate summons.  If any charges are threatened, then they must not go alone, and should immediately seek a lawyer.  If there is no alternative, then cite Article 51 of Russia’s Constitution according to which they can refuse to testify against themselves.  They should, however, sign nothing until they get advice from a lawyer. 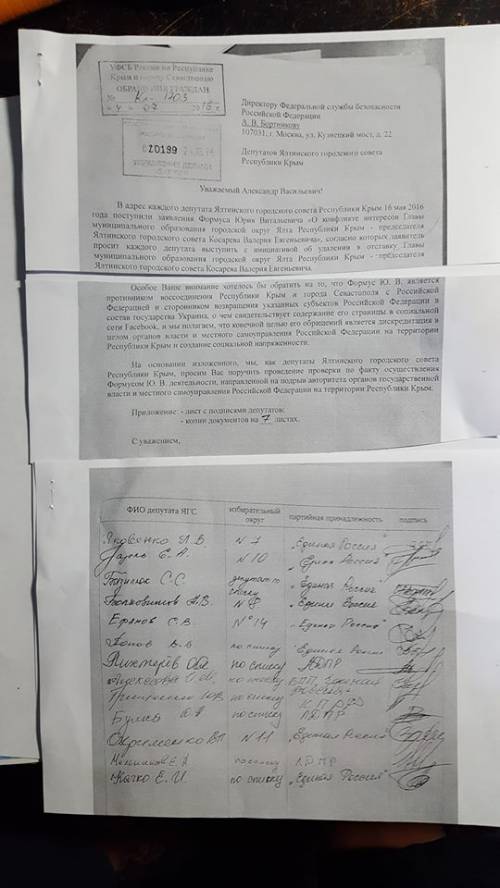 The denunciation sent by members of the Yalta City Council