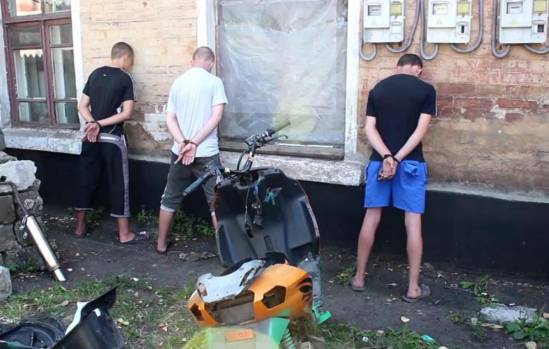 Militants from the so-called ‘Donbas people’s republic’ [DNR] have ‘arrested’ seven teenagers and claim that they were blowing up civilian and military targets for Ukraine’s SBU [Security Service].  The reports, backed only by videos of the lads supposedly ‘confessing’, are chillingly similar to Russia’s recent claim that Ukraine had ‘attacked’ Ukrainian Crimea under Russian occupation.  On that occasion also, the only ‘evidence’ was in the form of videoed ‘confessions’ shown on Russian television.   At least one of the men – Yevhen Panov – has clearly been beaten.

The DNR ‘seizure’ has been widely reported by militant and Russian media, and coincides with worrying signs that the latest ceasefire is not holding.  It also comes after a month in which the militants have constantly pushed the idea that vigilance is needed against ‘saboteurs’, with even children encouraged to ‘inform’ of anything suspicious.

The so-called ‘DNR ministry of state security’ reported on Monday that 7 adolescents have been ‘detained’ and are accused of acts of sabotage, following instructions from the SBU.  They are alleged to have blown up a number of cars, civilian and military targets.

The militants assert that the acts were carried out between May 2015 and June 2016, after an SBU officer Ihor Ritsko [nom de guerre Almaz] ‘recruited’ the oldest boy Bohdan K., who is now 18.  The plan was supposedly to “create a group from his friends to earn money by extracting debts from businesspeople in Yasynovate, then later acts of sabotage on DNR targets”.  Ukraine’s SBU supposedly oversaw the process.

The militants assert that the ‘saboteurs’ were first enticed by money, then blackmailed and threatened with punishment for crimes already committed.

The report asserts that ‘investigative’ work is now underway to identify all members of this supposed group and the level of liability each bears.

With supreme cynicism, the report ends by calling on international human rights organizations to pay attention to how Kyiv is allegedly “drawing minors into criminal sabotage activities”.

Everything follows the scenario used by the Russian FSB a month ago in Crimea: the same videos of supposed ‘finds’, the same ‘confessions’.  The sole difference is that the young lads do not look as if they have been beaten, but they do speak as though saying what is expected of them.  Since the last alleged act of sabotage is supposed to have taken place in June, the lack of any signs of ill-treatment could be because they have been held prisoner for many months.  Bohdan’s ‘confession’ begins with the claim that the car with ‘Almaz’ turned up while they were unloading smuggled goods.  He was asked if he would like to avoid punishment and answered that he would, and was then sent away to form a group to carry out the alleged ‘sabotage’.

Since the lads are all extremely young, it is to be hoped that the story has one element of truth in it, namely that their cooperation in confessing to such implausible ‘sabotage’ was obtained through nothing worse than threats of punishment for illegal smuggling.