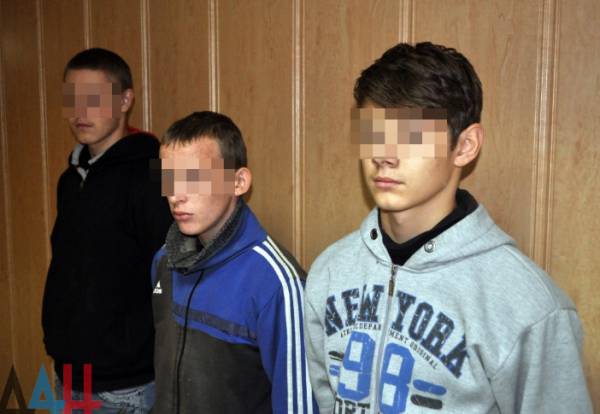 Two days after Kremlin-backed militants in Donbas released disturbing video footage of 7 young lads allegedly ‘arrested’ for acts of sabotage commissioned by Ukraine’s Security Service [SBU], Russia’s Investigative Committee has become involved.  Not, as one would hope, by calling on the Moscow-controlled militants to stop tormenting kids as young as 15.  Instead, it has initiated yet another of its ‘criminal cases’ against Ukraine’s SBU.

The announcement on the Investigative Committee’s website states that a “criminal investigation has been initiated against SBU officer Ihor Rytsko and other unidentified individuals in relation to evidence of the crime set out in Article 356 § 1 Russian Federation criminal code (the use of prohibited means and methods of war).”

It then goes on to explain “the investigators’” version, but here the rot sets in.  The version of events set out is exactly that given by militants from the so-called ‘Donbas people’s republic’ [DNR] on September 12.  Whose, therefore, is the “ongoing investigation” mentioned by the Investigative Committee, when Moscow is still continuing to deny its direct involvement in the conflict and that it controls the militants?

As reported, the so-called ‘DNR ministry of state security’ announced that 7 adolescents, aged from 15 to 18, had been ‘detained’ and were accused of SBU-commissioned acts of sabotage.  These had allegedly involved blowing up a number of cars, civilian and military targets between May 2015 and June 2016.  Rytsko was mentioned there, as having recruited the oldest boy, Bohdan K., who is now 18.

The plan was supposedly to “create a group from his friends to earn money by extracting debts from businesspeople in Yasynuvata, then later acts of sabotage on DNR targets”.  Ukraine’s SBU supposedly oversaw the process.  The militants asserted that the ‘saboteurs’ were first enticed by money, then blackmailed and threatened with punishment for crimes already committed.

There was no evidence as such of the crimes having ever taken place, only the ‘testimony’ of 7 young kids who had clearly been held in confinement, possibly for several months given the time that has elapsed since the time scale mentioned.

There was also nothing to indicate that the young lads, only one of whom is legally of age, had legal representation.

On Sept. 14, the so-called ‘DNR ombudsperson’ Darya Morozova was reported on the militants’ website to have called on the head of DNR, Alexander Zakharchenko “to show mercy to the teenager saboteurs”.

She asserted that the alleged “use by Kyiv of underage saboteurs” would be raised at the next humanitarian group meeting in Minsk on September 21.  She also claimed that the SBU had threatened the lads’ relatives who are on government-controlled territory. The teenagers had all, she claimed “admitted guilt and showed remorse”.

Morozova asserted that “UN representatives” had been present at the meeting with the kids and had verified that their rights were being observed.

As with all else in the militant / Russian Investigative Committee story, there is, for the moment, no objective confirmation of this.

It is certainly to be hoped that the young lads have been seen by UN representatives, but how much they could ascertain is unclear.  The boys are held in militant custody and will surely fear the consequences if they do not say what is required of them.

Iryna Herashchenko, First Deputy Speaker of Ukraine’s Verkhovna Rada and Ukraine’s representative in the above-mentioned humanitarian subgroup has called on the OSCE and UNICEF to check the information and ascertain that the lads have not been subjected to torture.  In her statement, made earlier, she also mentioned that she would be raising this subject in Minsk.

As has often been the case with Ukrainian hostages held in Russia or Russian-occupied Crimea, pro-Kremlin media have been right in there, providing lurid details of what are only accusations.  They never backtrack when, as in the case of Serhiy Lytvynov, even the Investigative Committee is caught fabricating the entire indictment. Russian courts are unfailing loyal in rejecting any attempts to bring defamation suits over arrant lies, as that brought by Ukrainian filmmaker Oleg Sentsov.

On this occasion, Life News called one of the lads, Yaroslav M. a ‘saboteur’ and broadcast a plaintive plea from the lad’s mother to Zakharchenko to release her son.  She said only that she blamed herself for being busy, holding down two jobs, and not spending enough time with her son.  He had, she said, as a resulted ended up in bad company.

It is possible that the five lads were part of a gang.  They may have even have been up to no good.  The ‘confession’ given by Bohdan on video says that he was approached by ‘Almaz’ [Rytsko] who initially used the threat of being punished for smuggling as the lever for ‘recruiting’ the lads.

Give any name as ‘recruiter’, and the story could then continue unchanged.  Unless, of course, the story, like Russia’s claims about ‘Ukrainian sabotage’ in occupied Crimea in August, is needed only for the accusations against Ukraine.

When the Kremlin-backed militants first made their allegations, it felt like they were simply aping the FSB’s ‘sabotage’ stunt in Crimea.  There was the same lack of any evidence, and only video footage of children under interrogation.  With the involvement now of Russia’s Investigative Committee, it turns out that this really is all part of the same type of ‘investigation’.