Pavel Sheremet: “You can’t be ready to be killed”A Year without Boris Nemtsov and of Sham InvestigationThe Same Fingerprints in the Killing of Nemtsov & PolitkovskayaInvestigators claim Boris Nemtsov killed for condemning Charlie Hebdo massacreNemtsov report exposes Kremlin lies and western pretence on DonbasNemtsov Report Says More Than 200 Russian Soldiers Killed In Ukraine WarNemtsov Allies Press U.S. To Punish Russian ’Propagandists’In Memory of Boris Nemtsov – Minute of NON-SilenceThe Anti-Semitic Coding in Putin’s Telegram to Boris Nemtsov’s MotherBoris Nemtsov: Yes, I’m afraid that Putin will kill meMother of slain journalist Pavel Sheremet: I don’t want innocent people to suffer for his murder Antonenko released from custody with Ukraine’s Sheremet murder trial arousing ever more doubtsUkraine SBU officers on trial for the killing of 72-year-old Maidan activist Interior Minister Avakov accused of manipulating public opinion over Ukraine’s most controversial trial Who answers for Antonenko’s imprisonment if Ukraine’s trial over Sheremet murder collapses?Lukashenko plotted to kill Sheremet yet Ukraine has charged people with no motive for his murder Police summons for Briton who criticized Sheremet murder case as Avakov’s ‘public show’20 years after Gongadze murder, the killers of another Ukrainian journalist are being protectedYulia Kuzmenko released from detention as ‘proof’ of involvement in Sheremet murder increasingly in questionFour years since Pavel Sheremet’s murder: From ‘a matter of honour’ for Ukraine to any arrests will do?
• Topics / The right to life

In Memory of Georgy Gongadze, Pavel Sheremet and All Slain Journalists 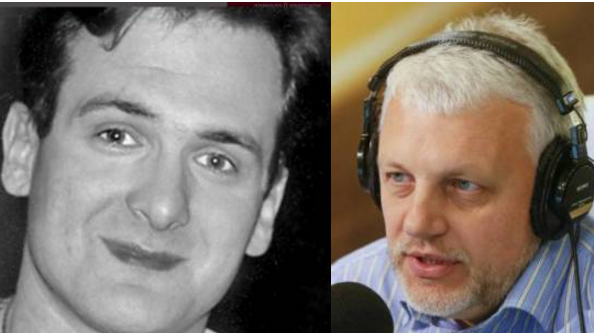 Traditional remembrance events on the anniversary of journalist Georgy Gongadze’s abduction and subsequent murder are especially poignant this year as they come just two months after the killing in Kyiv of Pavel Sheremet, the renowned Belarusian journalist and former prisoner of conscience. Ukraine’s media unions and other organizations have called on their colleagues to join in honouring their memory and that of all journalists who were killed while carrying out their work.

There is hopefully no reason to suspect any officials or higher in Ukraine of involvement in Sheremet’s killing, or of unwillingness to carry out a proper investigation.  There does not however seem to be any major progress in finding his killer.  Sheremet, who was just 44, had resigned from Russian ORT two years earlier in protest at the virulent warmongering propaganda against Ukraine.  He was living permanently in Kyiv, together with his partner and owner of Ukrainska Pravda, Olena Prytula.

Georgy Gongadze was a co-founder of Ukrainska Pravda, who wrote hard-hitting reports during the presidency of Leonid Kuchma which had by then become increasingly authoritarian and intolerant of independent media.  He was abducted by police officers on September 16, 2000, and his headless body was later found in a forest near Kyiv.

On this anniversary, as on all others, there will doubtless be calls within Ukraine and abroad for those who ordered his killing to be identified and held to answer.  The calls are correct, but the chances of this ever happening seem miniscule.

The reasons have probably been clear from very early on.  Two months after Gongadze’s disappearance, a cassette made by Mykola Melnychenko, one of President Leonid Kuchma’s guards, was made public.  If genuine, and it is widely assumed to be so, this incriminates Kuchma, as well as the head of his administration Volodymyr Lytvyn.  They have always denied any involvement, as, of course, anybody in their position would.

After the so-called ‘Orange Revolution’, Viktor Yushchenko promised a real investigation into Gongadze’s murder.  This never happened, and in 2006 Yushchenko even awarded a state honour to Mykhailo Potebenko, the former Prosecutor General who had effectively blocked any investigation at the time.

In March 2008, three former police officers - Valentin Kostenko, Mykola Protasov and Oleksandr Popovych - were found guilty of abducting and killing Gongadze.  Protasov was sentenced to 13 years, the other two got 12-year sentences.

Their superior – ex-Police General Oleksy Pukach went into hiding, but was arrested in July 2009.  In January 2016, the Court of Appeal in Kyiv upheld Pukach’s life sentence almost 4 years after the initial sentence had been passed, and well over 15 years after the killing.

The entire Pukach trial had been extremely long and all behind closed doors despite protest within Ukraine and abroad given the very serious grounds for suspecting that Gongadze’s killing had been ordered by people in high positions.

In his final words to the court, Pukach said that Kuchma and Lytvyn, who for some time during the trial had been parliamentary speaker, should have been on trial with him. He said that he had tried to tell all the truth, but that nobody had wanted to hear.

At the time, Valentina Telychenko, the lawyer representing Gongadze’s widow Miroslava Gongadze, told Ukrainska Pravda that she was delighted that the accusations had finally been heard by journalists. Unlike her, they had signed no undertaking to keep the court proceedings secret.  She asserts that in his pre-trial and court testimony, Pukach repeatedly spoke of Kuchma and Lytvyn, about where and when he met with Lytvyn, however that had never been used in the ‘investigation’ into who ordered the murder”.

This investigation is, in theory, still continuing.

Much was made in early 2011 when criminal proceedings were initiated against Kuchma over the Gongadze case.  President Viktor Yanukovych was already under heavy criticism for violations of press freedom, as well as selective justice, and his people tried to tout the criminal proceedings as proof that it was Yanukovych, not his predecessor Viktor Yushchenko, who was willing to reveal the truth about the Gongadze killing.  Within months, however, the Constitutional Court had obligingly ruled that evidence could not be used that had not been legitimately obtained by an investigative body.  The stand that evidence illegally obtained cannot be used may well be justified in many situations.  Here, however, it eliminated Melnychenko’s tape which, if authentic, clearly contained vital information.

Journalists and other members of the public will hold the traditional remembrance gathering on Friday evening on Maidan Nezalezhnosti [Independence Square]. As well as the recent murder of Pavel Sheremet, the remembrance events are also taking place, as in the last 2 years, under the shadow of war.  During last year’s remembrance event on Maidan, the names were read out of 61 journalists who had died in the course of their work, as well as those of a number of journalists killed in Donbas, defending their country.