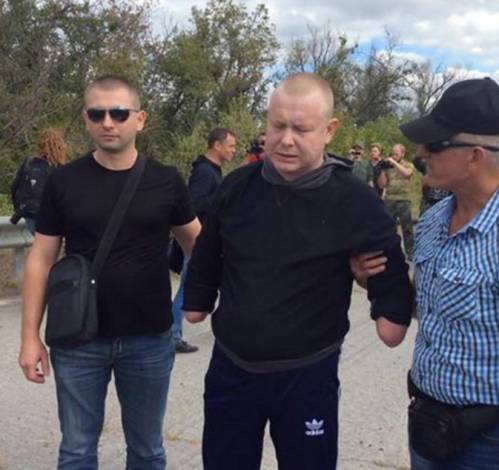 After several promised exchanges fell through, Volodymyr Zhemchugov has finally been released as part of an exchange of two hostages for four supporters of the Donbas militants held by Ukraine’s SBU.  According to Yury Kachanov from the Centre for Hostage Exchanges, the 45-year-old Ukrainian is in a very poor state.  The other person named is a former SBU officer Yury Suprun.

President Petro Poroshenko announced the exchange, saying that the men would be receiving needed medical care.  In the case of Volodymyr Zhemchugov, the care has long been critically needed. 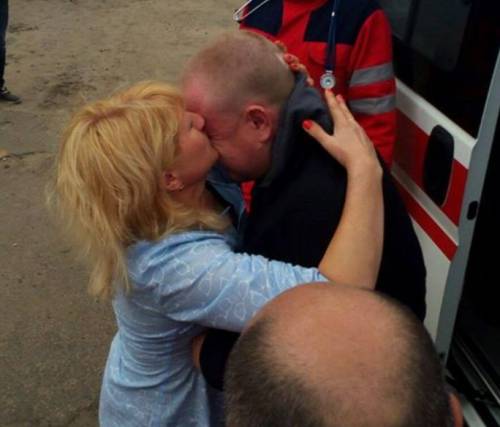 As reported, the first information about Zhemchugov’s capture came from the so-called ‘Luhansk people’s republic’ [LNR] and a propaganda site linked with them.  Back in Autumn 2015, the latter had posted a video in which Zhemchugov, who was obviously injured, but also looked as if he had been beaten, ‘confessed’ to carrying out acts of sabotage for the Ukrainian armed forces.

His wife says that she and her husband are originally from Donbas, but were living and working in Georgia.  When the war in Donbas began, Zhemchugov went to Krasny Luch to get his mother out. He took her to Kyiv and registered them both as displaced persons.  His wife told a journalist from Novaya Gazeta that her husband had probably returned to collect belongings.

Her husband was a patriot, she said, who had never hidden his pro-Ukrainian views, and he did not support the militants. She said that the so-called ‘LNR police’ had contacted her on Sept 29, 2015 and asked whether her husband really was  a businessman.  They claimed that somebody had given him a grenade.

Since she was unable to get to Donbas, she rang relatives and friends, asking them to visit Volodymyr and take him medicine.  She later learned that all of those whom she approached had ended up summoned for interrogation, and nobody was being allowed to see her husband.

Zhemchugov was prioritized on Ukraine’s exchange list, yet it has still taken over 10 months since the first promised exchange, scheduled for Nov 17, 2015, collapsed.  The militants had initially agreed, but then changed the conditions.  It was after this, on Nov 25, that Zhemchugov was shown on Newsfront ‘confessing’.  Even if Zhemchugov had not, as appears, been beaten up, the very fact of interrogating somebody in his condition for a propaganda video, should surely be classified as torture.

The video was supplemented by a report from Leonid Pasechnyk, referred to as the ‘LNR’ state security minister.  While effectively acknowledging that there had been an agreement to release Zhemchugov, Pasechnyk asserted that the investigators still had “certain questions” which needed to be clarified”.   He claimed that Zhemchugov was in fact a saboteur who had blown up railway tracks and an electricity pylon.  Zhemchugov had supposedly gone back to check a mine that had not exploded and it had blown up, causing his serious injuries.

The Ukrainian was formally ‘charged’ on Dec 25, and was moved to a SIZO [remand prison].

Yury Suprun appears to have been a former SBU officer, who was held in captivity for over 5 months.

There are over 100 hostages whom the militants are still holding prisoner, including some seized this year, such as religious specialist Ihor Kozlovsky and civic activist Volodymyr Fomichov.