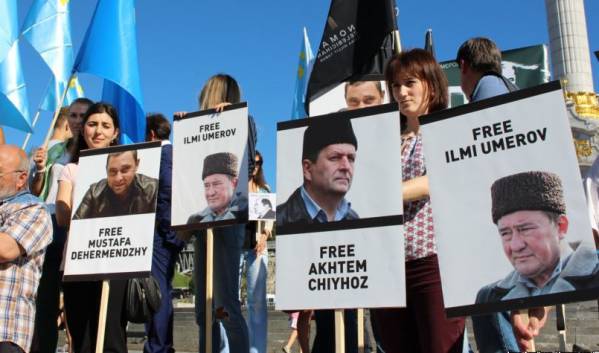 Most Crimean Tatars appear to have boycotted the elections which Russia illegally held in occupied Crimea.  How many other Ukrainians also refused to take part is as yet unclear, but it seems likely that despite threats and coercion, the turnout was low. Judging by previous experience since Russia’s invasion of Crimea, the boycott could lead to an escalation in repression.

All Crimean Tatar leaders, including the forcibly exiled head of the Crimean Tatar Mejlis Refat Chubarov had called on all Crimeans to boycott the elections. In his address Chubarov said that Russia was hoping, by running them as though normal, to somehow validate the pseudo-referendum held at gunpoint soon after Russian soldiers invaded Crimea in Feb-March 2014.

Boycotting them, he said, would be a way of showing support for political prisoners and their families.

Nariman Dzhelyal, First Deputy Head of the Crimean Tatar Mejlis, wrote that he would not be voting.  This was a conscious decision, he added.  It was his choice, and his protest.

He will not go to vote as the regime is persecuting his fellow countrymen and fellow Muslims, and they are using criminal lies to try his friends.  He will also not take part in unlawful action, he says. “The entire world recognizes Crimea as a part of Ukraine, and therefore the holding of Russian parliamentary elections in Crimea is illegitimate.  It is for Russians to elect their parliament.  That is not his government, nor his country.

“I will not go to the elections because this regime does not hear nor want to hear my voice and the voices of thousands of my compatriots.  It only wants to use it.

I will not go to the elections. I have made my choice. And you?”

The call was heeded.  There seems to have been an extremely small turnout both in Bakhchysarai and in one area of Simferopol in which the population is about 90% Crimean Tatar.  2 hours before the end of voting, only 9% of all possible voters had turned up.  In the village of Krasny Mak, the turnout was much lower even before annexation.  It is probably significant that the Central Election Commission has claimed that the turnout will only be known together with the results.  In all parts of Russia, there were statistics broken down according to certain stages in the voting.

As reported, public sector workers in many parts of Crimea are known to have been threatened with dismissal if they did not take part in the elections.

In September 2014, the ‘government’ installed at gunpoint held elections to the Crimean parliament which the Mejlis called on all Crimeans to boycott.

Just days after those ‘elections’, there was an 11-hour armed search of the Mejlis, and then, on an entirely different pretext, the Mejllis and related Crimean Foundation, were given 24 hours to vacate their premises in Simferopol.  Since then, one Deputy Head Akhtem Chiygoz has been arrested on surreal charges and held in detention for over 18 months, while another – Ilmi Umerov is facing criminal charges, and has been subjected to punitive psychiatry for saying that Russia must be made to leave Crimea.

In April this year the Crimean Tatar Mejlis itself was banned, with Russia calling it an ‘extremist organization’.

It is ominous, though predictable, that the so-called Crimean deputy prime minister Ruslan Balbek has claimed that “extremists from the Mejlis, together with radicals from the Russian-banned organization Hizb ut-Tahrir, have tried to apply psychological pressure, intimidating Crimean Tatars, coming directly to polling stations. This was effectively an act of sabotage in the interests of Kyiv”.

There were earlier reports that the FSB had been trying to identify those who spoke out against voting, and to hold ‘prophylactic talks’ with them in Soviet style.  Once again, the claims were directed at the Mejlis, as a supposedly ‘extremist’ organization.

Russia and its puppet regime in Crimea have been openly trying to present the Crimean Tatar Mejlis and, indeed, all Ukrainians who oppose its invasion and annexation as ‘radicals’, ‘extremist’ and dangerous.

The claims are always mendacious and cynical, but on this occasion, they are also manifestly silly.  Crimeans were threatened with dismissal if they didn’t vote, enticed to polling stations with the chance of winning a smartphone, and yet the turnout was almost certainly pitiful.