Missing persons and enforced disappearances in the Kherson Region (24 February-24 June 2022)Belarusian rail partisans who helped save Kyiv from the Russian invaders threatened with death sentences Russia is trying to destroy historian Yury Dmitriev and “what they’ve done to his daughter is even more horrifying”Ukraine protests after Russian-controlled Luhansk militants join Belarus KGB in torturing Protasevich Russia and Belarus boast collaboration on joint hit operations against their ‘enemies’ Russia and its proxy Luhansk ‘republic’ join Belarus in attack on abducted journalist Roman Protasevich Abducted journalist’s life is in danger in Belarus. Not only his while Lukashenko and Putin get away with terrorismMenacing FSB offensive against the brother of Crimean Tatar political prisoner Ukraine is illegally deporting activist to Belarus to face persecution Russia could kill Crimean Tatar political prisoner imprisoned for civic activism’We’re Belarusians, Not A Russian Region’: Protests Take Aim At KremlinRussia uses personal data act to hide perpetrators of the Soviet Terror from historiansZelensky’s proposed ‘reform’ of the Security Service fails badly on both reform and human rightsPolitical prisoners deported to Russia speak out on anniversary of Crimean Tatar DeportationStalin, Putin and ‘annexation of Crimea’ adorn new Russian Defence Ministry churchBack in the USSR: Russia stops ex-dissident from leaving occupied Crimea after threatening punitive psychiatryHistorian Yury Dmitriev imprisoned in Russia for insisting on Memory of the Soviet Terror and SandarmokhUkraine will be in direct violation of international law if it extradites Kazakh opposition journalist Zhanara AkhmetRussia confirms huge reprisal sentences against two Ukrainians from Crimea who refused to ‘confess’Barbaric excavations underway at Sandarmokh in Russia to rewrite history about the Terror
• Topics / News from the CIS countries 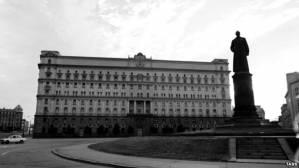 Back to the future? After the dissolution of the KGB, its Moscow headquarters housed the Federal Security Service (FSB), which is reported to be the center of a reconstituted superagency.

Russia plans to create a super security agency called the Ministry of State Security (MGB), the name once given to Josef Stalin’s Soviet spy apparatus before it was renamed the KGB after his death, Kommersant newspaper reports.

The business daily’s September 19 story is based on anonymous sources and could not be independently verified. The report has been neither confirmed nor denied officially, and President Vladimir Putin’s spokesman, Dmitry Peskov, has declined to comment.

Speaking to RFE/RL, two leading experts on Russia’s security services and a former KGB lieutenant colonel now in the opposition said variously that the reform was "entirely possible, " "certainly plausible, " and "very likely."

"I think this is one of the projects that appear to be on the president’s table, because in principle the idea of some kind of enlargement of the power agencies has been coming up recently, " said Andrei Soldatov, the editor and founder of the investigative website Agentura.ru.

The Kommersant report suggested the changes could make the management of security and law enforcement agencies more "effective" and help stamp out corruption inside the agencies.

In July, the paramount domestic security agency, the Federal Security Service (FSB), carried out searches of the Russian Investigative Committee’s Moscow headquarters and arrested senior employees over allegations they were shielding a crime boss from prosecution in return for bribes.

Return Of The KGB?

Kommersant claimed the reform would be carried out before the presidential election due in March 2018 that could also be brought forward following the ruling party’s landslide victory in parliamentary polls on September 18.

The report said the monolithic new ministry would be shaped around the FSB and would also comprise the Federal Protection Service (FSO) and the Foreign Intelligence Service (SVR).

It said the agency would effectively resemble the Soviet Union’s Committee for State Security (KGB), where Putin served from 1975 to 1990, rising to the rank of lieutenant colonel. The KGB was broken up into separate agencies in 1991 during the collapse of the Soviet Union.

"Essentially, this is a case of bringing the band back together, " said Mark Galeotti, a senior research fellow at the Institute of International Relations in Prague and an expert on Russia’s security services. "The suggestion is that a presidential security service will remain outside it. But basically speaking, this ministry would reconstitute the KGB in all its aspects."

The MGB would be given sweeping new powers not only to provide investigative material for cases opened by law enforcement, but also to supervise the cases, the report said. Its investigative department would take charge of the most resonant criminal cases of the day, it continued -- and a Kommersant source specifically said that would include corruption investigations.

The report follows a major law enforcement shakeup in April with the creation of the National Guard, a new body that oversees Interior Ministry troops, OMON riot police, and SOBR special forces. The Federal Migration Service (FMS) and Federal Drug Control Service (FSKN) were also folded into the Interior Ministry at the time.

"Earlier, Putin believed in a form of bureaucratic pluralism, " Galeotti said. "Multiple agencies overlapping that could be played off against each other and that also could keep each other honest."

"Now we’re seeing a different model of governance with a handful of superagencies under people he feels he can trust. I think that’s where this fits. It’s really more about concerns over the elite, " he said.

The report also said that the Investigative Committee -- which styled itself as a Russian version of the FBI but whose star appears to be waning -- may be folded into the Prosecutor-General’s Office. If true, that development would appear to chime with a Russian media report on September 14 predicting Aleksandr Bastrykin’s imminent departure from his post as chief of the Investigative Committee.

Gennady Gudkov, a former KGB colonel and liberal opposition politician who was expelled from the last convocation of the State Duma, told RFE/RL’s Russian Service that he believed the Kommersant report.

"I think this news is very likely, since last night the country made a decision -- to pursue the worst-case scenario. It is entirely clear that the country has gone from authoritarian to totalitarian. This happened on the night from September 18 to 19, " Gudkov said in a reference to the ruling party’s victory in weekend parliamentary elections.

Putin’s United Russia party secured a constitutional majority with 76 percent of seats in the State Duma, while not a single independent opposition voice was elected. "The monopolization of power today has evidently reached a peak, " Gudkov said.

The MGB was the abbreviation given to the security service under Stalin from 1946 to 1953.

The Kommersant report noted that the reform would be costly and that simply paying compensation to employees unprepared to work in a new structure might cost tens of billions of rubles.

There is speculation on social media that the possible creation of a powerful KGB-style agency indicates that Putin fears protests during the 2018 elections. Soldatov, however, said that serious reform might conversely spawn transitional chaos in security structures, with staff trying to hold onto their jobs rather than actually work.

"To be honest, I don’t understand why they would create this chaos ahead of an event like the 2018 election, which is crucial for the Kremlin. I have a feeling there is a desire to demonstrate the trend of strengthening the special services in order to calm the first man -- and that is all, " Soldatov said in a reference to Putin.

Galeotti also said the creation of a super security agency could pose dangers to Putin. He noted that in the Soviet period the Communist Party was careful to maintain control over the KGB.

"You haven’t got those institutions now. There will be nothing really significantly outside this ministry that Putin can use, short of the army, to actually control the ministry, " Galeotti said.

"Secondly, one of Putin’s biggest problems at the moment is that essentially people tell him what he wants to hear. And I think the more you narrow the range of agencies providing information for Putin, the more the politicization of intelligence is going to be a problem."

With reporting by Lyubov Chizhova of RFE/RL’s Russian Service